Eleven years after the fact, Krista interviews the first girl she ever smooched.

“There she is,” my best friend, Esther, hissed. We were at Kavarna, the coffee shop hangout in Green Bay, Wisconsin. It was July second, the summer before senior year of high school.

Esther worked at Kavarna and had been telling me for weeks about a girl who came in sometimes to get coffee. Esther said this chick was the most beautiful girl she’d ever seen in real life, that she looked like an actual model, that I had to see her so I would know what Esther was talking about.

Esther had asked: The girl’s name was Whitney. Whitney* always ordered a cappuccino. She went to a different high school on the other side of town. This made her automatically mysterious. 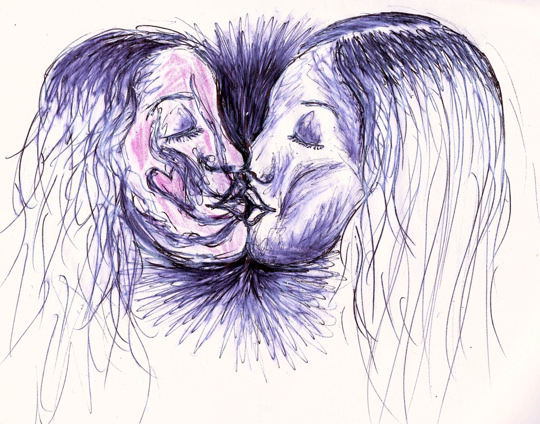 Today was the day Esther had decided that we would befriend Whitney. She was the one for us. We were cool and we would add her to our group of cool girls (previous membership: two).

As soon as I saw her, I understood what Esther had been going on about. Whitney was really tall and really thin, and she had a shining mane of honey-colored hair streaming all the way down her back. She had sort of…loped into the coffee shop, flopped a tattered canvas backpack onto a table, and folded her long legs under the chair. She gave off the distinct impression of not giving a shit what anyone thought of her.

To a self-conscious 17-year-old, that’s all it took.

I suddenly felt all fluttery. Esther and I went over to her table. Esther said, “Can we sit here? I see you all the time. We’ve decided to be friends with you.” Whitney looked up. She didn’t seem remotely surprised. “Sure.” Maybe this was normal for Whitney. Maybe strangers always wanted to sit with her because she was so beautiful.

This was not normal for me. I was 17. I was Mormon. Really Mormon.

I had never: seen an R-rated movie, tasted caffeinated coffee, had a sip of beer, touched or even seen a boy’s weiner, been shopping on a Sunday, smoked a cigarette, said the F-word in a volume above a whisper, met a queer woman, or worn a two-piece swimsuit. And I did not know that any of this was unusual.

I was going through a huge “linen everything” phase. Loose linen pants, spaghetti-strap linen tank top, Birkenstock clogs. I was wrinkled all over, all the time, and I took to carrying a spray bottle filled with saltwater everywhere I went so I could mist my clothes, pull out the wrinkles, and achieve that totally careless, perfectly rumpled look like I was permanently strolling down the beach with my sweatered husband in a Viagra ad. Gah. 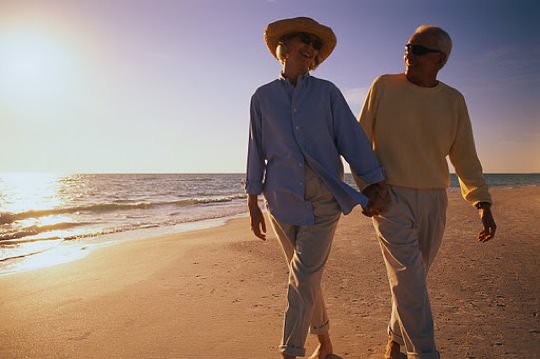 Within minutes of meeting us, Whitney had invited us to a fireworks show the next night. Apparently, it was supposed to be “killer.” Pink Floyd’s Dark Side of the Moon would be played. Whitney was going to go alone (Who did things alone??? God, that was cool), but we could come if we wanted.

“Oh awesome,” I said. I didn’t know who Pink Floyd was.

The next night, Esther and Whitney and I laid out on a quilt in the darkness, watching fireworks explode overhead. We all cuddled. Whitney was wearing soft gray corduroy jeans. She looked amazing in them. Esther inhaled a clove cigarette, exhaled, and passed it to Whitney, who held it so loosely between her fingers that it seemed like it might drop, any second, onto the quilt.

She lived in a huge house out on the bay, and her parents were never, ever home. They had a stocked liquor closet that Whitney was free to help herself to. I could sleep over for days at a time and no one cared.

Instead of getting wasted on Malibu, Whitney bought books on rare vintage wine and opened bottles from the cellar, thoughtfully swishing each mouthful to discern “oak notes” and “jam flavors.” She made me watch Stanley Kubrick movies. She introduced me to sushi. She showed me the proper way to crack open a lobster. She got me high for the first time by kissing me and breathing pot smoke into my mouth.

Christ. She was a new world for me. I loved her.

Fast forward 11 years. Whitney and I are still friends. I live in Chicago. She lives in California.

I called her up after not talking to her for several months, and left her an awkward voicemail, asking if I could interview her about our first kiss ever. She called me back at work the next day, and here’s how it all went down.

KRISTA: OK, I have exactly 20 minutes to talk before I have a meeting, but I don’t think this’ll take that long. So, did you even know you were my first girl-kiss?

WHITNEY: Actually, no, I did not. That’s funny. I had experience with two other girls before you. Just kissing, though.

KRISTA: So I was your third girl kiss. Man.

WHITNEY: Of the three, though, definitely the best.

KRISTA: Hmph. So what was I like as a teenager?

WHITNEY: You were really intelligent and exciting. I always thought you were beautiful.

KRISTA: [Turning bright red] Thanks. Um. Do you remember when you first started liking me?

Whitney: It was when I first met you. You were with Esther at Kavarna and you were telling me a story about putting a giant stuffed animal in someone’s yard at night as a joke. I had no idea what you were talking about. I thought you were stunning. I was experimenting at that time. I didn’t really know my sexuality.

KRISTA: Did you know that I liked you liked you?

WHITNEY: No! I mean, I knew you wanted to be friends. But no.

KRISTA: I didn’t know I liked you either. One night I was getting ready to go over to your house for one of our sleepovers and I was curling my hair and putting on makeup really carefully. I thought, “Why am I primping to go over to Whitney’s house?” And it hit me: I really cared whether or not you thought I was pretty.  I remember thinking, “Ohmigosh. Do I like Whitney?”

KRISTA: Do you remember the first time we kissed? I have to be honest—I was very focused on getting in your pants even though I would have had no idea what to do next. So, don’t be mad, but I’m not sure I remember our first kiss.

WHITNEY: The first time I remember really kissing was on one of the twin beds in your room.  We were lying down. I remember you put your hand on my hips and said you liked hip bones.

WHITNEY: It was after dinner. You were wearing these killer 3 ½ inch red heels. I was really impressed. We made out in your bed. You were close to my face at first. Then you leaned in.

KRISTA: OK, so this is weird, but: what were you feeling when we kissed? Because I had wanted to kiss you for so long it was monumental.

WHITNEY: I was struggling because I obviously liked men, but I had this thing with you. I remember the feeling of your lips. Of the girls I kissed, definitely the sweetest and softest.

KRISTA: [Instantly beginning to plot how to get back together] Really?

WHITNEY: Man, I can even remember your lip balm. You were going through a Softlips phase.

KRISTA: You were my first obsession, the first person I ever said “I love you” to. Did you know I used to write tortured poetry about you? I have journals full.

WHITNEY: You do? I didn’t know that.

KRISTA: Did you think I was a lesbian?

WHITNEY: I didn’t know if you were full-on. You were dating that fricking Armani model [Italian boy I dated. Not an Armani model]. I thought you might be, though.

KRISTA: Why do you think you and I didn’t work out?

WHITNEY: I’ve always been on the fence. I like being with men. A lot. I like the way I feel when I’m with men. I couldn’t give it up.

KRISTA: What are you doing these days?

WHITNEY: I work in the wine industry in Napa Valley and I’m happily engaged. He actually just moved in.

KRISTA: Awesome. [Pause.] It was really good to talk to you.

WHITNEY: Sure. This was fun. Bye, Krista.