David Sedaris Is As Awesome As Everybody Hoped

One of the greatest writers of our time weighs in on eating buttons and dispensing free condoms. 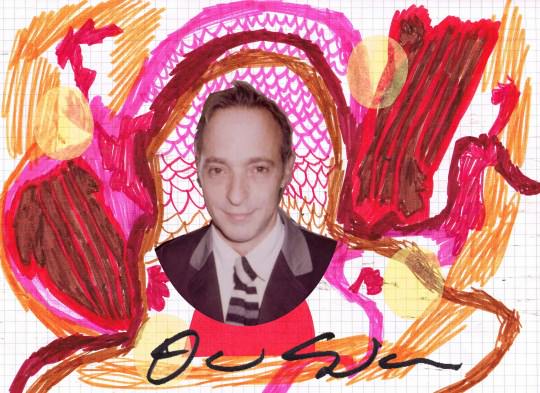 David Sedaris is one of the funniest human beings on the planet, one of the greatest writers of all time, and the neatest member of my Sims family of favorite writers that I once made (WHILE SURROUNDED BY MY MANY FRIENDS AND BOYFRIENDS). I mean, have you heard him on This American Life? Have you read any of his books? Holidays on Ice? Me Talk Pretty One Day? Squirrel Seeks Chipmunk (original title: Let’s Explore Diabetes With Owls)? Because if not, please do. But first, read this interview. He talks about growing up and writing and all that “life” stuff, but also about his favorite Japanese clothing designers and giving condoms to teenagers. He also mentions—multiple times—that he doesn’t know how to drive a car. I think it’s a plea of some kind. In the future, people will look back on this interview and say, “If only we’d gotten him that car, his would’ve been the BEST Sims family ever.”

Do you ever find yourself playing up a certain side of your personality to get a better story later on?

I was just thinking about this the other day. I never learned how to drive a car. And so I never really developed aggression skills. And so I’m not very good at saying no. I think that saying yes, or being afraid to say no, leads to a lot more stories than playing up a side of myself. Most people, something starts to happen and they’re able to say, “No, I don’t want this to happen,” and, “No, you’re going too far,” and, “No, I don’t like the way you’re talking to me.” But I’m afraid to say that.

You write a lot about your family, and your childhood sounds unpleasant at times. But you and your sister Amy obviously turned out great. How did that happen?

Amy and I are not exceptional. I think the only reason that things worked out for us the way they did was because we were ambitious, whereas some other people in my family weren’t. I just spent some time with my sister Gretchen and I thought, How could I have ever forgotten how funny she is? And I saw my sister Lisa earlier this month and thought the same thing. Lisa writes as well [as us], but she’s never been interested in showing it to other people. The only difference with me and Amy is that Raleigh [North Carolina] was too small for us, and we wanted to get out of there as soon as we could. Whereas my brother’s content to just be a funny guy at a party.

What compelled you to share your writing, unlike the other members of your family?

I don’t know, I’ve always wanted everyone to pay attention to me! When you come from a big family, you’re always competing for attention. In our case, we were always competing for our mother’s attention&#8212our dad’s attention was negative. Nobody really wanted it. In high school, I was in the drama club, but I have all these nervous tics and so, when I got a part, all my nervous tics went into overdrive. It was just horrible. And I realized, OK, that’s out. So then I tried visual art. That was OK, but that wasn’t right either. And then I started writing, and it seemed right. When I’m writing, I’m just alone in a room, and then going on tour is my reward for spending all that time alone in a room.

Have you gone back to Raleigh? Is it as bad as you remember?

Yeah! [Laughs] I never learned to drive a car, so my world there was very small. And I still don’t know how to drive, so when I go back, my dad picks me up and gives me rides. I’m still 14 in that regard. And so I still have a 14 year-old’s view of it. And Raleigh has grown a lot, but it hasn’t grown in a way that interests me. It’s another Target, another T.J. Maxx, another P.F.Chang’s. And I could never live with that kind of heat again. So I think I made a right decision.

Are you ever surprised by the kinds of people who come to see you on your tour?

Yeah, I am. I went to 42 cities in 43 days on a lecture tour and, in that case, people are buying tickets, so you’re getting people who can afford a 50-dollar ticket. Now, I’m on a book tour because I think people should be able to come for free, so that introduces me to a completely different kind of person. A truck driver came to one of the readings, and that made me feel really good. Last night I met a nurse and she had just that day had a patient who defecated a button. [Laughs]

Yeah! A button came out! And I said, “But did he eat it off his clothes?” And she said, “Yeah, I think that’s what he did.” Every now and then, someone comes down the line and I think, God, I’m so grateful to have you as a reader.

Are you ever perplexed when certain people like your stuff?

Well, I imagine it’d be the same for you. Whether you have a book or a blog, the audience is kind of invisible, for the most part. I’d like to think that I could stand in front of these people, and talk to each one of them, and know how to make them happy. But I would have no idea how to make them happy. The crazy part is realizing that being yourself is the key. For some insane reason, people like you.

I just realized my question was basically, “Are you surprised that people even like you?”

No, but I am! I actually am! I wanted to give something away to the audience, so I thought I’d print up a joke book and give it to people as a little souvenir. It was gonna cost me $20,000. Instead, I decided to print up these postcards. One was a photograph of the skull of a Pekingese. One was a book cover that I’d hired a designer to make when I was going to title my last book Let’s Explore Diabetes With Owls. And then the other just said, “Abortion, $3.” I got to this theater in Memphis and they said, “You can’t put this card on your table. The people who come to this theater are very conservative.” And I said, “But it’s a really good price for an abortion!” And they said, “No, you don’t understand.” And I said, “I would be ashamed to look a child of mine in the eye and tell him or her that I passed up a deal like this.” My whole schtick was that it was just a really good price so I said, “I really need those cards on the table.” And not one person complained. A couple of years ago, I offered priority signing to smokers because smokers never get anything. Everyone’s down on them all the time. And a man filed papers to initiate a lawsuit saying that I was discriminating against nonsmokers on California state property. To me, that’s like, What are you doing in my audience? I don’t want you.

Do you see a lot of teenagers at your shows?

Yeah, I do, and I always have gifts for them because I’m always so honored that they come. If I run out of gifts, I give them money. A couple of years ago, I gave condoms to teenagers because I wanted something that was light and easy to pack. Perfect, right? And then I got a letter from a woman in Chicago who said, “I came with my daughter to see your show and she’s 15 and you gave her a condom and told her you didn’t want to be responsible for her losing her virginity so she could only use it for anal sex.” Yeah, that’s exactly what I said! I don’t know how she could’ve been offended by it. I mean, I was nice to her daughter. And then I wrote about it and people would come up and say, “Where’s my condom?” And then that kind of ruined it. So now I take like the shampoos and conditioners from my hotel. And I have these little cards that I got at the Museum of Contemporary Art in Chicago, the gift shop there, which I think is fantastic. They’re these little cards and they’re really beautifully printed on nice paper and they say, “STOP TALKING.” They don’t say, “Shut up,” so they’re still polite, but they have a trillion uses.

What’s so special about when teenagers come see you?

Everybody says that they have better things to do, but teenagers are the only ones who really do have better things to do. When I meet a teenager, I think, They could be getting high in a car. And instead they came to hear a middle-aged man read about going to China. I’m just so honored. And I always write teenagers back. But I don’t like it when they put their school address as the return address. Like, if they give me their home address I’m gonna stalk them or something. Or when they say, “Thank you in advance for answering this.” I still write them back, but I scold them for saying that because that sounds like something a teacher told them to do. That’s a dumb person’s idea of how to get somebody to write them back. Or how like a really, kind of fluffy, uninteresting…like a state worker’s idea of how to get someone to write you back.

Were there any people like that that you wrote to or admired as a teenager?

There was an author I started writing to — I wasn’t a teenager, but I was in my early 20s — but I would just write him anonymously, and when I look back on it, it must have been…he just must have taken those and thrown them straight into the trash can. [Laughs] And he’s somebody who I always admired and who I still admire and when I was in California a few weeks ago he introduced me. And I’ve never told him that I used to write him anonymously.