Are You Afraid of the Dark?

At a slumber party, secrets come out—some that you never meant to share. 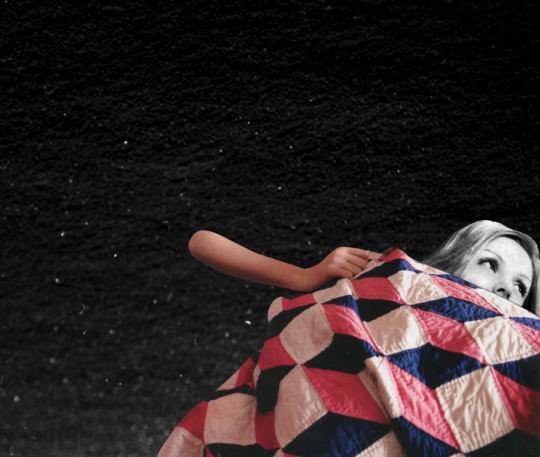 There was always one girl who left the slumber party early. It would usually happen around 11 o’clock—late enough to seem legit, but not so late that her parents would be asleep and angry that she’d called. She would tell us she had a stomachache, we’d commiserate, noting that our stomachs were a bit sore as well, most likely from collectively eating 900 bags of Fritos and 600 bags of marshmallows in a two-hour time span. A car would pull up, her name would be called, and after a round of shy goodnights, she’d be gone.

“She always gets sick,” someone would say, and we’d all nod yeah. As we got older, we’d follow the yeah with an eye-roll. But that’s as far as we ever went with things; I don’t remember ever breaking down why someone left early, even if we all seemed to believe that “stomachache” wasn’t the complete truth. It was most likely because we were all hiding something; bringing up conspiracy theories only made our own secrets more vulnerable.

Going to a slumber party requires a level of trust, both in your slumber-mates and in yourself. You expect to give away some secrets: crushes, kiss stories, dreams of the future. But there are other secrets that come up when you spend the night with your friends for the first time, things you don’t expect to learn, and things that you hope to keep from others. I remember being surprised when two of my friends immediately put their sleeping bags next to one another, territorially claiming each other in a way that showed a burgeoning best-friendship—a level above the rest of us. I also remember seeing a friend unfurl a somewhat tattered sleeping bag and looking a bit sheepish about it, and recognizing that we’d each brought a bit of our own homes into the basement of our friends’ house, whether we’d wanted to or not.

I showed up to my first slumber party with two things: a bag of candy and my raging fear or the dark. I was happy to share the candy, but I kept my fear of the dark to myself, because I wasn’t sure how my friends would take it, and the fear of being considered a “baby” and being laughed at was as strong—if not stronger—than my fear of having to spend a night without the lights on.

I’d always been afraid of the dark. My parents understood; I’d had a night light for as long as I could remember. The idea of sleeping without one made my stomach sick, to the point where I could understand why someone would claim 11 o’clock illness, why someone would want to sneak out of the party early. I realized early on that I needed a plan of some sort in order to make it through the night without having a breakdown in front of everyone. Plan A was to fall asleep before anyone else, when the lights were still on and everyone was still gossiping and watching TV. But party talk about warm water bowls and pee had convinced me to drop Plan A, and I was left with Plan B, which was, in short: whatever you do, don’t start crying.

The lights went off before the television did: we’d gathered around to watch some dumb movie, and some girls had already fallen asleep in their bags, and I remember being both relieved and annoyed that nobody tried to make them pee. The room became quieter as the movie ran out, giggles replaced with pops of air and deep-sleep sighs. Someone—it may have been my friend’s mother—eventually turned off the television, and all of the light was gone from the room. I was terrified.

The things beneath the darkness were what struck me: I remember being afraid of way the walls in my friend’s home looked; all of the photographs covered in shadows, school backgrounds and familiar smiles fading into a blur of generic home décor, as if the house could belong to anyone, to a stranger. The air smelled of dinners I hadn’t eaten, of a perfume or hair spray that wasn’t my mother’s. I tried a trick that my sister had taught me—to close my eyes as hard as I could, and then reopen them, so that they’d adjust to the darkness, but it never seemed to work. I tried it over and over again—close, open, repeat—and eventually I must have exhausted myself, as they just stayed closed and I made it through the night without stumbling upstairs and begging my friend’s parents to call mine and have them bring me home.

In order to avoid being alone in the dark at subsequent sleepovers, I became the insomnia cheerleader. My strategy was to play “Let’s Break the Record.” I’d come up with some completely bogus time, like 5:33 AM, and tell everyone that my sister and her friends had stayed up until then, and that we should try to break the record. I’d keep everyone up by trying to make them laugh, by pushing sugar and caffeine, by noting that if we kept the lights on, it would be harder to sleep. It worked about 70 percent of the time. The rest of the time, I’d end up the awake, alone, chewing Sour Patch Kids and waiting for the sun to come up. By this time I had a few slumber parties under my belt, and I’d tried to move beyond the eye-adjustment trick to other forms of finding a sense of safety in the darkness. I’d do breathing exercises, or I’d close my eyes and try to visualize myself somewhere else, or I’d force myself to stare at the darkest parts of the room until I wasn’t (completely) afraid of them anymore. At some point I realized that the more I stared at the shadows on the wall, the more I could pretend I was in my own house, and something safe and familiar would wash over me and eventually lull me to sleep.

The skill set you develop on the slumber party circuit is one that sticks with you. You learn how to adapt in a room full of your peers, how to feel at home in a new place, how to deal with your fears. It is maybe the best way to prepare for a college roommate, in that you’re forced to open yourself up to how other people live around the clock—you see each other when you first wake up, you hear each other if you talk in your sleep. And when you get older you realize that maybe the girl who always left early didn’t have a deep dark secret after all, that maybe she was just afraid to be afraid in front of everyone else. I still think of her every time I sneak out of a party, or find an excuse to avoid some social obligation, or shake my head no whenever someone tries to get me on the dance floor. A little-known lesson of slumber parties is that they can teach you that sometimes all you want is go home, where you can be whomever you please, where you can flip all of the switches to on, sleep in your own bed, and dream under the bright lights. ♦