Weekends with the Rat Pack. 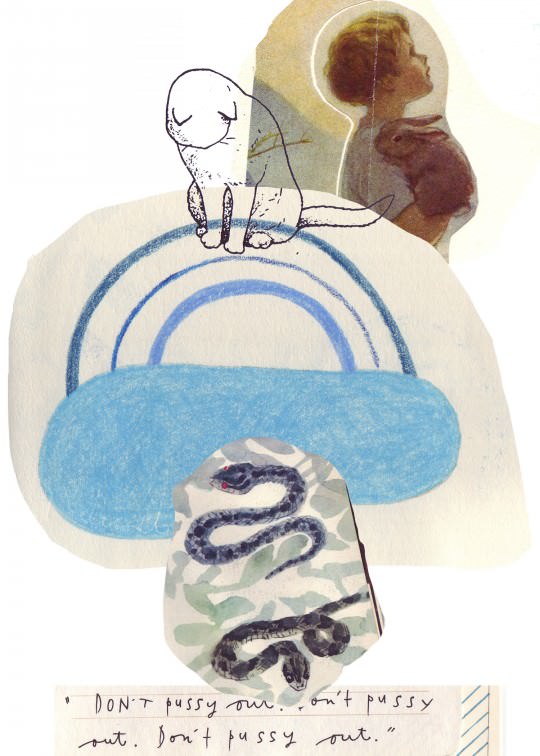 It was a hot, sweaty afternoon as we rode through the winding pavement on our mountain bikes. We raced towards the East Lodge to cool off in the lake. My legs burned as I pedaled up and down the hills, trying my hardest not to come in dead last against my two friends again. They waited at the top of the hill for me, laughing as I barely managed to coax my bike up, then we ran to the scum-filled lake. Little rocks and stones bit at my feet as I ran after my friends while undressing. I took off everything but my shirt, afraid to reveal what was underneath. Jake and Dwayne* were already halfway out to the rock in the middle of the lake.

“Slowin’ down the team again, Vinny!” Jake screamed out across the lake.

“He’s too puss to get in the lake,” Dwayne said.

My feet stood still at the edge of the lake. I imagined all the snakes and vines crawling around in there.

I forced myself to remove my shirt and cautiously doggy-paddled out. Vines and swamp guts tangled up in my flailing limbs. I struggled to avoid them while catching up with my friends. But it was too late—Jake and Dwayne were jumping off the rock by now. I came in last, again. I managed to swim over to the rock, which was covered in a thick layer of bird shit. Using just my fingers, I lifted myself up onto its surface and slid up to where the brothers stood waiting.

When Jake, Dwayne, and I got to the rock, we were no longer three preteen boys; we were paratroopers. Dwayne went first. He said a quick fake prayer and jumped off the rock from its highest point, probably six feet up, pulling an imaginary parachute cable as he plummeted into the thick green water.

Jake didn’t hesitate—he flew off the rock and pushed his legs into his chest to make a splash as he hit the water. When he resurfaced we all started to laugh and spit brackish water at one another. We climbed back onto the rock and lay down on our backs. The feeling of warm bird shit was uncomfortable, but we would wash it off on our swim back to the dock. I noticed Jake trying to flex his abdominal muscles.

“Check out my squares,” he said referring to the vaguely outlined muscles on his stomach. Dwayne laughed and tried to outdo his brother, hardening his own abs. I looked down at my stomach, with its rolls of fat.

“Vinny, why are you so chubby?” Dwayne said.

“Yeah, where are your squares?” asked Jake. I shrugged, still staring down at my belly.

“That’s probably why he’s always the last one to get up the hill!” Dwayne said, laughing.

“Take a look at those rolls!” said Jake, poking at my stomach.

My eyes stung, but I held back the urge to cry. Crying would only make things worse. I tilted my head upwards to try and force my tears back into my eyes and stop them from rolling down my face.

“Yeah, well, I can still kick both your asses,” I said. The brothers immediately stood up and got into a fighting stance, carefully balancing on the rock. I went for Dwayne, who was much smaller and skinnier than his older brother, first. I ran into him and shoved him off the rock. He screamed as flew backward into the water. Before I could turn around, two wet hands touched my back, and in seconds I felt the cold water of the lake. Jake jumped into the water, splashing me and Dwayne. Our laughter echoed around the lake. We all swam back to the sand, occasionally stopping to push Dwayne’s head under the water until he nearly drowned. Just like that, we were back to joking around, as if nothing had happened.

With lake water dripping from our bodies, we mounted our bikes and sped downhill toward home. The wind dried the water from our bodies, but a sticky salty feeling stayed on our skin for weeks, because we never shower when we’re in Lakeridge.

Lakeridge is a gated community in Connecticut where our parents go to escape New York City on weekends during the summer. It was an escape for us kids, too. The idle, sticky, lazy summer somehow made it easy to huddle together, to form packs.

“You kids are inseparable! The Rat Pack!” a tennis player called out as we rode our bikes through the court. Lakeridge is infested with tennis courts. You could pass a hundred tennis courts riding through the compound. Jake, Dwayne, and I hated tennis.

“Yeah, you don’t even run around or anything,” I said, panting my way up another hill.

“Yeah, and it’s for girls,” said Dwayne. It was decided. Tennis was a girls’ sport; it was uncompetitive and unphysical, and it was not intense enough for us.

We rode to the brothers’ house and parked our bikes in the parking lot, taking up three spaces as we always did. Inside the house we tossed our shoes into the living room, collapsed onto the couch in front of the TV, and popped open some Cokes. Thankfully our parents were out playing tennis—otherwise Jake and Dwayne’s mom would make us turn off the TV and go outside, even though we’d already been outside all day.

Uninterrupted by parental interference, we sprawled out on the couch, the three of us basically on top of one another, sweat still clinging to our skin, watching TV. We found a channel showing professional wrestling, something our parents would never allow us to watch. We loved watching these overgrown, steroid-enhanced giants punch and tackle one another. The WWE wrestlers did their sport almost naked, in tiny skintight underwear, the better to show off all their huge muscles.

We were all exhausted, but Jake somehow managed to conjure up enough energy to stand and then pounce on me, landing on top of me with all his weight. The air was forced out of my lungs, and I fought to breathe. I squirmed around and finally managed to squeeze him into a tight headlock. I wrapped my arm around his skinny neck and tried not to let him move around. We often played this game. Whoever tapped the floor first would be considered the loser, just like the wrestling rules on TV. I was much bigger than Jake, but somehow he was always able to squirm around and fight back. He tangled his limbs around my body, applying as much pressure as his gangly arms could manage. I felt my insides being smushed together, and once again I struggled for air. I tapped the floor. Jake untangled himself and I took a huge, relieved breath. Jake started jumping around the living room in a victory dance.

“He kicked your ass, bro!” Dwayne called out from across the room.

“You’re next!” Jake yelled. He had a crazy look in his eyes as he pounced on his brother, flipped him over on his back, and grabbed his shorts.

“No, Jake, no, please, Jake, no, stop, Jake!” Dwayne cried. Jake grabbed Dwayne’s underwear and pulled up, lifting Dwayne’s body into the air. This was Jake’s signature move. Dwayne, dangling from his underwear, screamed.

Just then the boys’ mother, Sara, walked through the front door.

“Uh-uh, no! Jake, put him down!” she hollered. Jake dropped Dwayne back onto the couch. Dwayne began to cry, burying his face in the couch cushions.

Sara shook her head and Dwayne, tears dripping from his eyes, turned to give her a hug.

Later that night Dwayne went downstairs to his bedroom and Jake and I lay on futons in the attic. We stayed up in the dark like we always did, just talking. The futons were extremely uncomfortable, and there was an empty twin bed downstairs that one of us could have slept on, but this is just how it was. We would talk for hours in that attic, about anything we were worried about, anything that was bothering us.

“How come girls don’t like us, Jake?” I asked. I could still taste the lake water in the sweat that dripped onto my lips. We kept a window open in the attic, and the ruffling of the trees’ leaves and the chirping of insects filled the pauses in our conversation.

“Girls like tough guys,” said Jake. “We can’t talk like we talk to each other with girls.”

“Yeah,” I said, my eyelids getting heavy as I drifted off to sleep.

The next morning I woke up cold. I looked over at Jake sleeping in a mountain of blankets, half of which he’d stolen from me throughout the night. The smell of eggs and toast downstairs got me on my feet and down the winding staircase. Dwayne had been awake for hours, probably playing with his toy cars or helping Sara make breakfast.

It was Sunday. Sundays were always the worst. Sundays were when we went back to our separate homes in the city, to our separate schools and separate lives. After breakfast, we would clean the house and make our beds, and then Jake and Dwayne would get in their parents’ car and leave. After they left I would make my way back to my parents’ place alone. I hated Sundays.

It wasn’t long until Jake and Dwayne lost interest in our weekends in Lakeridge. A few years had gone by, and we were teenagers now. I would drive up to Lakeridge with my parents and wait for my friends to show up, but their house would stay empty every weekend. Jake and Dwayne “got busy,” they said, and they couldn’t “waste” whole weekends away from their lives in the city.

“We can’t this weekend, man, both us got plans,” Jake would say when I called to ask where they were. Then he’d hang up.

I hated spending weekends alone up there. I stopped going swimming in the lake, never again jumped off the rock. It might sound naïve, but I never thought those days would end. I didn’t know that growing up would mark the end of that kind of fun, the end of pushing one another into the lake, wrestling one another to the ground, and talking about girls late into the night. I missed my two best friends so much I got angry. I found myself breaking things around the house and cursing out Jake and Dwayne.

As I got older, I started to fear expressing my emotions. It felt unsafe to talk about them to anyone but Jake. I started to worry about being seen as soft, being called a pussy. Now I see those Lakeridge days as my childhood, and more often than not I dismiss those late-night talks with Jake as “childish and stupid.” But on the rare occasions when I’m able to be honest with myself, I know that being part of the Rat Pack, scurrying around Lakeridge with my two best friends, was the most emotional and important time of my life. It was anything but childish. ♦

* All names have been changed (except Vinny’s).