A love letter to my middle-school friends. 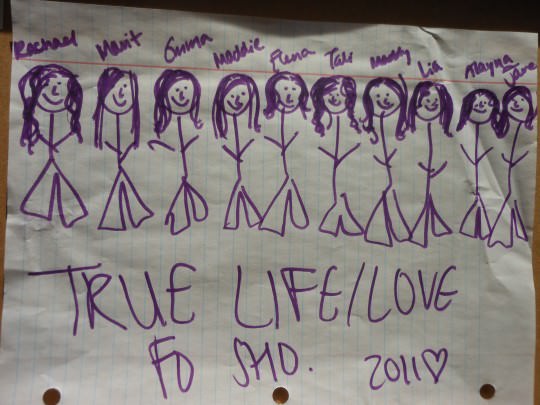 I first met my best friends in my sixth-grade gym class. Our group bonded over silly things, like having the same OCD tendencies and our affinity for Roald Dahl. Later, we spent time together working on ambitious class projects and going on overnight field trips, which were some of the best experiences of my life.

By eighth grade, we had become a cluster of 16 girls sitting together at Table 10 in the lunchroom every day. We weren’t cliquey, but we were all really close—yes, it is possible to have 15+ best friends.

These girls are fun and smart and genuine and made middle school a little less terrible. We had crazy traditions like birthday “locker parties,” a “quote book” of funny things our friends had said, and periodic potluck lunches—the cafeteria attendant referred to us as “the party table.” Outside of school, we took sewing and dance classes, played soccer, and were in all of our school musicals.

Leaving my friends as we all went to different high schools was really hard. Now we have to work to see each other, with 16 jam-packed schedules to accommodate. We attend one another’s theater performances as a group, we hang out downtown, and we have a cookie-making party every February, but it’s hard to get the whole group together.

Still, one night is always blocked off on my calendar a year in advance. On the last day of school, all 16 of us get together for a giant sleepover. We crowd into a basement and talk over one another as we recount the whole year’s worth of stories, eat inordinate amounts of M&M’s, take embarrassing photos, and trade yearbooks (mostly to scope out one another’s latest crushes).

Our most respected ritual, though, is our time capsule letters. We each write one every year, and they’re stored in a sealed envelope until the next summer’s sleepover. We open our old ones and laugh about how much we’ve changed, how young we were last year… the wave of nostalgia is almost overwhelming.

When we’re all writing our letters, the room is completely silent for a while. One friend commented once that no other people we know could ever share that kind of deep moment with their friends. But that’s what makes Table 10 so special. And when we finish the letters, we’re right back to laughing.

Here are some selections from our letters for the past few years. It’s striking how often we all talk about not wanting to lose touch with one another. It’s more striking that we never have. 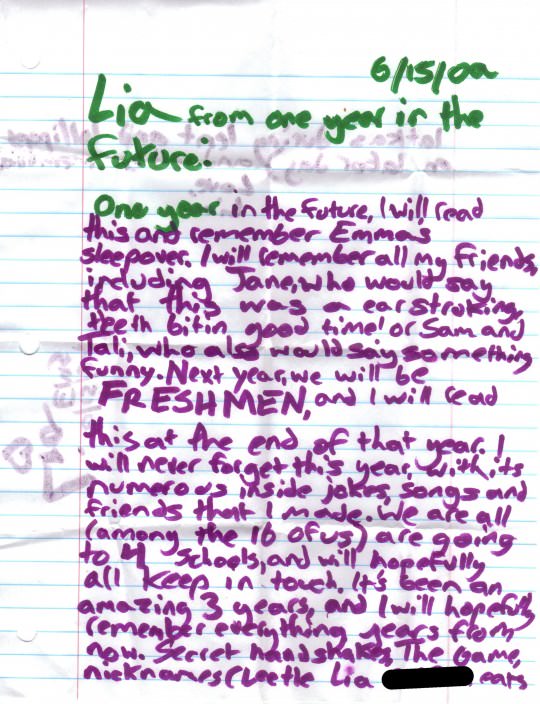 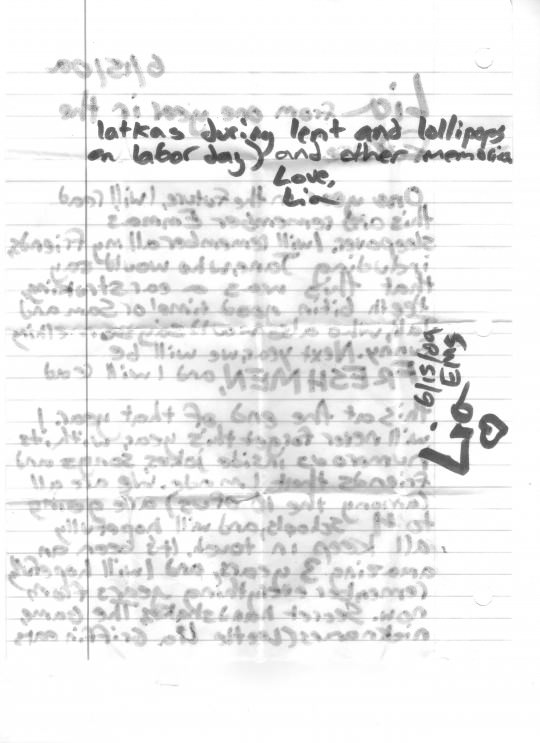 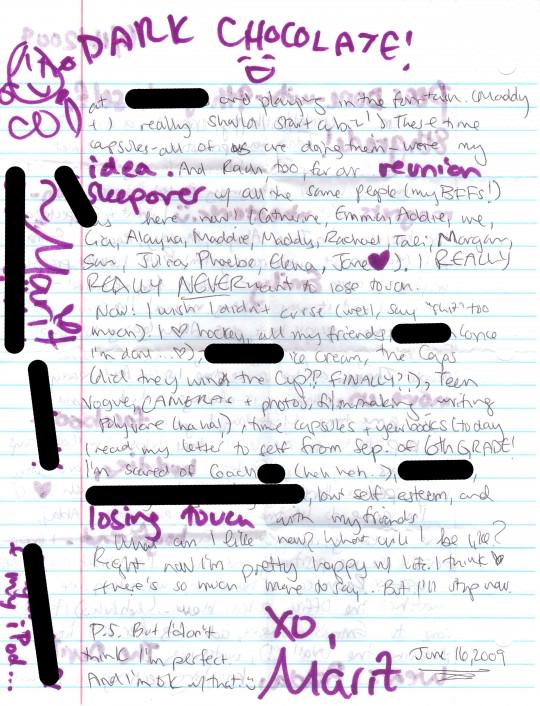 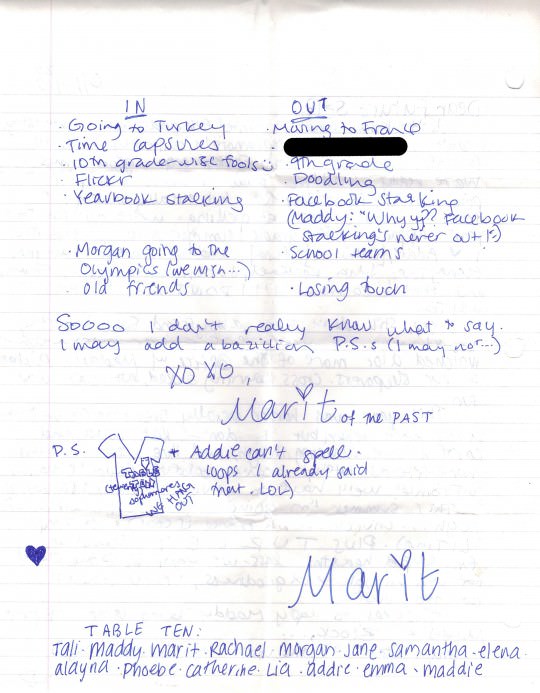 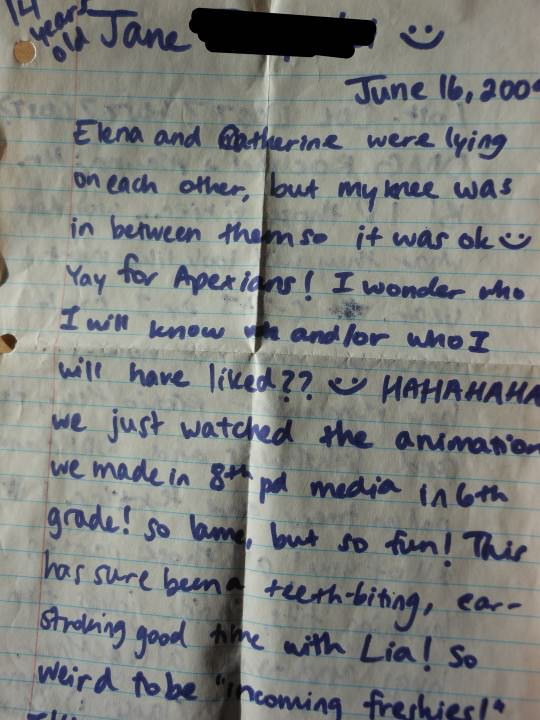 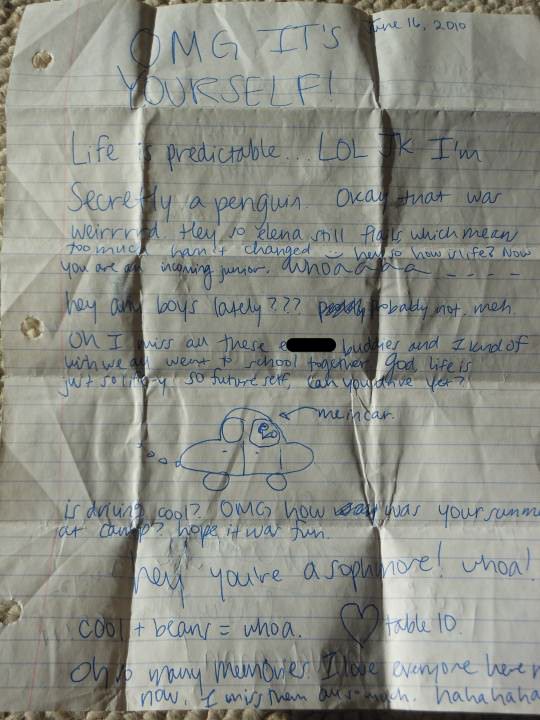 Catherine records important facts in 2009, like that JUSTIN > MAX, and Lia’s mom = Phyllis: 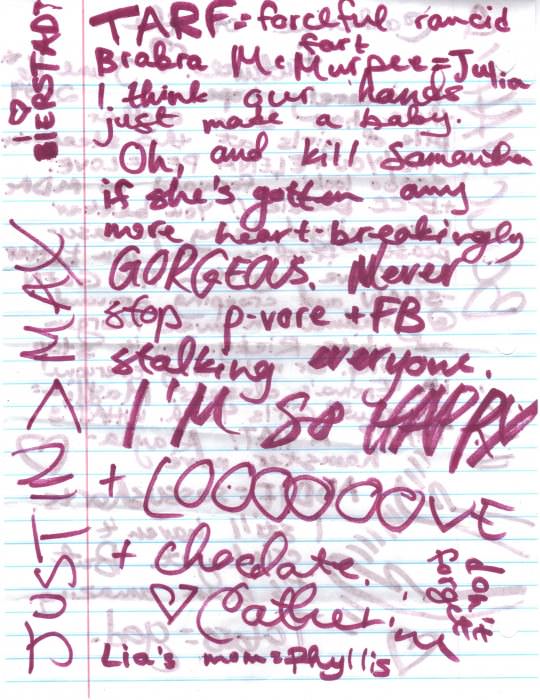 Elena in 2009, strangely obsessed with death? 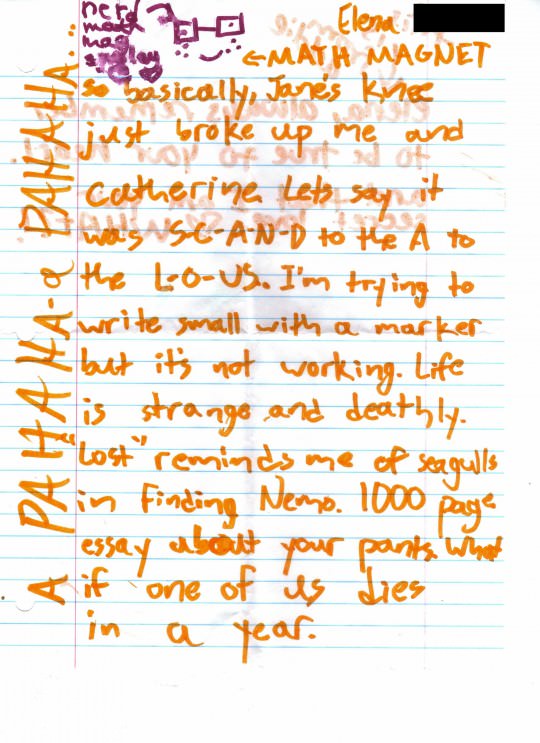 A year later, not over her death obsession… 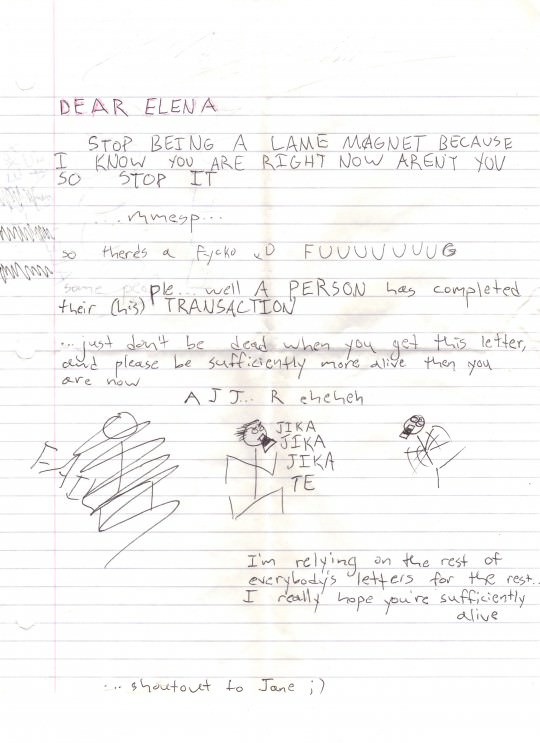 …but still not losing sight of the important matters of the living:

Marit Björnlund is a high school junior who loves fashion, journalism, tae kwon do, and watching hockey. She dreams of moving overseas, saving the world, and being as cool as Anderson Cooper.