This stuff isn’t cool, or smart, or good…but it’s the stuff that pulls you through. 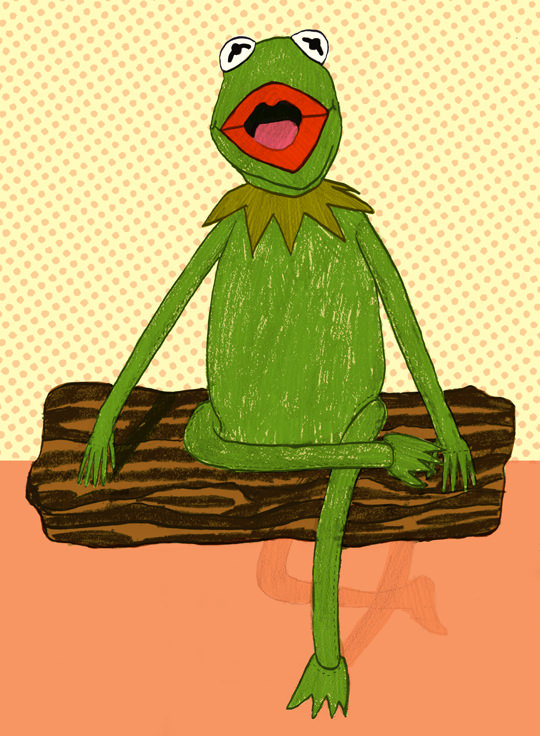 Between the ages of 13 and 14, I was unhappier than I’d ever been. Not coincidentally, I also managed to memorize all the words to all of the songs in The Muppets Take Manhattan.

Actually, I memorized The Great Muppet Caper, too. And The Muppet Movie. That whole trilogy was on a fairly constant loop in my family’s VCR, the first thing I turned on when I came home from school. I knew the plots, the words, the jokes, and the punchlines to the jokes; I could probably have recited them from memory. But I kept watching.

Thirteen was a bad year. I had gone from being the barely tolerated girl in elementary school to the not-at-all tolerated girl in middle school, and it seemed to get worse every year; I had no friends, no social life, and not a lot of hope. Kids stole things out of my gym locker if I forgot to lock it, or from my desk when I went to the bathroom—my notebooks, my clothes, my calculator—and hid them, tore them up, or broke them. Or they’d leave notes in my locker, stupid bitch nobody likes you, stuff like that. Some guys would get weirdly, scarily sexual, asking me how often I masturbated or if I wanted to see their penises. One boy offered me a sip of his Coke, and then told me that he’d jizzed in it—clearly, the Clarence Thomas hearings had left an impression—and when I told him to fuck off before going to see the vice-principal about it, that vice-principal told me that I had “also used foul language,” and so he couldn’t punish the boy unless I was willing to accept a day of suspension. “Sexual harassment” wasn’t in that teacher’s vocabulary. He thought it was all about bad words.

My point is: I was not exactly gifted with an abundance of people who were happy to see me, when I was 13. But Kermit always was.

Together again, he sang, every time The Muppets Take Manhattan started up—just that one fuzzy little green puppet, against the black screen, singing directly to the audience. Gee, it’s good to be together again. I just can’t imagine that you’ve ever been gone!

Yeah, well: that’s because you saw me yesterday, Kermit. But I’ll take it.

I knew I was too old for these movies. I knew it was weird to watch them so much. But the Muppets made me feel safe. Their world was about warmth and bright colors and corny jokes; nobody in the Muppet movies would call anyone a “stupid bitch,” not even the bad guys. They just sang about friendship and being yourself and following your dreams; they felt comfortable, like getting under a big, warm blanket on a cold night. They took away the chill.

I’ve since learned that I am not alone in this taste for pop-culture comfort food. This is stuff that you don’t watch (or read, or listen to, or whatever) because it’s good—often, it’s sort of embarrassing—but because it makes you feel good. I once knew a guy—a grownup—who would deal with a rough week by purchasing some sugary cereal on Friday night, then getting up early to eat it while he watched Saturday morning cartoons in his pajamas. My mother prefers ancient BBC sitcoms and Meg Ryan movies. My current boyfriend’s bad-day go-to is, as he puts it, “spin-offs in the Cheers-o-verse,” like Wings and Frasier; he appreciates them, he says, for how “predictable and formulaic” they are. My favorite example: I once had a friend who was a hardcore goth, who actively scared people with her multiple facial piercings and tendency to black leather outfits, and whose favorite entertainment, on a good day, was grown men screaming about how much they identified with Satan. She confessed to me that when she was really bummed, she watched Mad About You re-runs. This, for those not in the know, is the sitcom where Paul Reiser and Helen Hunt play a married couple who wear lots of khakis, have a large, loving family, and encounter various problems along the lines of, “Oh, no! Our Thanksgiving turkey has been eaten by our adorable dog!” To be fair, I guess, even Satan would be frustrated by that one.

Music can work this way, too. I know quite a few women with a secret Tori Amos stash—she’s not the most fashionable singer in the world, but sometimes she sounds like the only person in the world who knows why you’re in such a bad mood, and what to do about it. I’m also a fan of Fiona Apple, in her earlier, angrier moments. This stuff—which I’ve heard referred to, by more than one dude, as “whiny chick music”—seems embarrassing, when you’re in a better mood. But when you’re down and out, getting permission to “whine,” even just via your iPod, can be a lifeline.

Which is not to say that it’s all heavy: silly pop music can also work wonders. Admitting that you can be pulled out of a funk by “Party in the USA,” or Ke$ha, or even (shudder) Blink-182, feels goofy. Yet all of these musicians have been described to me as pop-culture comfort food: simple, familiar, and uplifting. In your worst moments, you don’t want to be challenged. You want something that reminds you of growing up, or that feels safer and cleaner than the mess you’re in. You want to be taken care of, basically. And who’s to say that’s a bad reason for watching or listening to something? Why is it necessary to always want Great, Sophisticated Art? Pop-culture comfort food gives you permission to be sappy. It lets you enjoy things that are too young for you, or too silly, or too sentimental, or too dumb. Pop-culture comfort food isn’t the stuff you consume on your best day, to prove how cool you are. It’s the stuff that you save for your worst day, the stuff that pulls you through.

I wasn’t completely cut off from pop culture, during my year of Muppet movies. I had lots of Sonic Youth albums. I watched My So-Called Life, and even dyed my hair Angela Chase maroon, like every other would-be alterna-girl in my grade. I’d heard about Welcome to the Dollhouse, and I was interested. But that year—the year when I was alone, scared, overwhelmed, hopeless—I didn’t want to hear about yet more harshness or alienation. And I didn’t have the energy to be cool. In that moment, I didn’t need Thurston Moore and Kim Gordon; I needed Miss Piggy and Kermit.

I haven’t watched the Muppet movies in a very long time. It turns out, after you’ve watched three movies for 365 days—about 121 times apiece—fatigue does, in fact, set in. But this fall, the Museum of the Moving Image in Queens had a Jim Henson exhibit. I went. It had concept drawings for the Muppets, and clips from Jim Henson’s experimental films, and a plan for a weird hippie nightclub that he’d apparently designed after seeing it in a nightmare. But, more important, it had Kermit. The actual Kermit puppet! I think it had even been used in The Muppet Movie. There he was, perched on a little log in a glass display case, right as you walked in.

I paused there, for a moment. Tried to wrap my head around it. Here was this tiny little object—nothing more than a stuffed animal, really, made out of foam and felt; you could see the seams—about half as long as my arm. And it was what had pulled me through the toughest year of my life. I’d known Kermit’s name since I could talk. He was always there. When they stole my binder, wrote “SLUT” on it in Sharpie, tore my science notes out of it—Kermit was there. When they slipped me notes about how no one liked me—Kermit was there. When that guy told me I’d just swallowed his semen, when the vice-principal told me I would have to be punished for not reacting nicely—there was Kermit, with his gentle, chirpy little voice, singing lullabies, making me feel safe. And now, here he was. I just can’t imagine that you’ve ever been gone, the song goes. It’s not starting over, it’s just going on.

Twenty years after he took Manhattan, Kermit and I were both in Queens. And he was a stuffed animal. A doll. Not a real creature, in any sense. But I don’t know if I would have been OK, without him. It felt important to stand there, in front of him. To let him know that I was safe now. I had turned out fine. ♦