I really mean it this time! 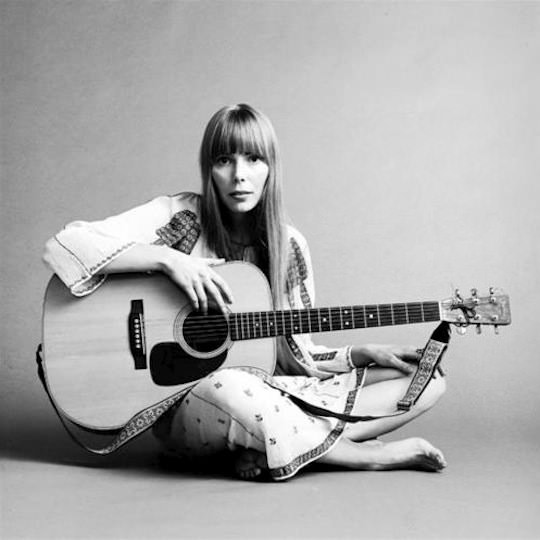 Literally the Best Thing Ever is usually about not being embarrassed about bizarre fascinations with things like stickers and iCarly and Martha Stewart. But Joni Mitchell is no guilty pleasure. She is not a temporary obsession. She is, LITERALLY, I REALLY MEAN IT THIS TIME, the best thing (person) ever.

Joni Mitchell had polio as a child, which made it hard for her to form traditional guitar chords with her hands, so she made up her own tuning and chords, and sometimes played a dulcimer, which is why it is close to impossible to figure out many of her songs on guitar, and why she has had so few successful imitators!

Here is a beautiful video of her singing with Johnny Cash.

Here is a beautiful video of her singing with Mary Travers and Mama Cass. I mean, they physically embody a RAINBOW with their CLOTHES. Ugh, I totally take back my post about the 21st century not sucking and I hate everything. But I can’t even bring myself to actually hate everything because this video makes me so happy!

People (like myself) write about music in the ’60s like it was so PURE, but even Peter Paul & Mary were totally defined by their manager, Albert Grossman, who made them all stay inside while recording in Florida because he liked the idea of them all being pale. Joni had no contrived brand that way. She wrote her own songs; she got her own perspective of Woodstock watching news coverage in a hotel room; the song “Blue” has moments of being critical of the druggy lifestyle of her music peers. What I love is that she could be part of that music community that was so rooted in fighting against stuff…

…but that her own protest songs were deeply personal and less explicit. “Woodstock” expresses unity without getting all WE’RE ALL IN THIS TOGETHER, and “Big Yellow Taxi,” which starts with the lyric “They paved paradise / Put up a parking lot,” somehow feels more about the circle of life and whatnot instead of about society—which, for me at least, has a more powerful effect, and hits way closer to home. (I’m embedding the weird YouTube person slideshow version instead of the live one because the giggle at the end is a no-fail smile-inducer.)

Her personal songs weren’t intended to feel protest-y, but they were subversive in their own way. It’s taken a long time for the romanticism of a poet or a tortured artist to stop being exclusive to dudes—and this hasn’t been 100 percent resolved yet—and so some people have enjoyed the convenience of classifying Joni’s work as dopey overemotional “girl” music. Which is really unfair! As much as I love Bob Dylan, it took him almost 15 years before he could take any blame for a failed relationship in his music! Joni’s right there on the track “River,” saying, directly, “I’m so hard to handle / I’m selfish, and I’m sad / Now I’ve gone and lost the best baby that I ever had.” It takes strength to admit to weakness, and to be so honest. Why, here’s a convenient quote from Joni herself on the subject:

“The Blue album, there’s hardly a dishonest note in the vocals. At that period of my life, I had no personal defenses. I felt like a cellophane wrapper on a pack of cigarettes. I felt like I had absolutely no secrets from the world and I couldn’t pretend in my life to be strong. Or to be happy. But the advantage of it in the music was that there were no defenses there, either.”

I think for some people the most difficult thing is coming to terms with the fact that being happy will not come as easily for them as they feel it ought to, that just smiling will usually not be enough, that being sensitive and observant sometimes makes you feel more “in touch” with “life” or whatever, but most of the time it just feels like a burden, or like everyone else is in on some kind of joke that you’re taking way too seriously, and sometimes you feel like a brat because you can’t just accept how things seem to be, because you have to think about it all and that just results in things always eventually being somewhat painful, and it sounds so pretentious, but it’s not like it’s smart thinking necessarily, it’s not like you’re better than anyone, it’s just that you’re curious about things, I guess. There has been plenty of art made by people trying to make the best out of this personal realization, from Sylvia Plath to Courtney Love to Liz Lemon. But Joni opened that door a crack or two. The range of musical artists who have named her as one of their major influences includes Prince, Madonna, Bjork, Sonic Youth, Led Zeppelin, Joanna Newsom, and Regina Spektor, to name a very few.

I don’t know if I think some people are more this way than others, but I do think everyone, at some point, is attacked by the PUBERTY PTERODACTYL (new Rookie mascot). Sometimes it’s more than just puberty, sometimes it’s depression, and often it’s hard to have the articulation or awareness to create art from it. But, if there’s a way to be optimistic about sadness, the thing I do like about being depressed is that that’s when I get the most out of “Blue,” or out of my favorite Joni song, “Cactus Tree,” the last track on her first album, Song to a Seagull.

Each verse tells the story of a different guy trying desperately to connect with the woman he loves. I’ve always pictured them as multiple lovers of the same woman, though now that I think about it, I guess it could be the stories of various relationships. Nevertheless, the relationship always falls through for the same reason: “She’s so busy being free.” The song describes each man’s story in detail—one climbs a mountain, another sails, the seventh is “bleeding from the war”— but whatever this woman is doing, it’s barely described beyond that one line, repeated at the end of every verse.

The prettiest idea is that “being free” means she’s hitchhiking or playing guitar in a field or some other magical 1960s stereotype thing, and travel is mentioned at some point. But one of the few hints we get about this woman is that “her heart is full and hollow,” which honestly makes me think that it’s possible she’s not doing anything at all, except thinking and feeling and being so preoccupied with all that that it’s hard to let others get too close, hard to be in on everyone’s joke, hard to be satisfied with the idea of happiness all these other people created. And that makes it a little more OK to feel that way myself, because, SPOILER, sometimes people use words like “they” or “you” when they’re really talking about themselves. And god, how comforting that someone else is not strong and not happy and can still get something like Joni’s music out of it, and that sometimes being not strong and not happy means getting the most out of Joni’s music. ♦