Home recording for the solo arteest. 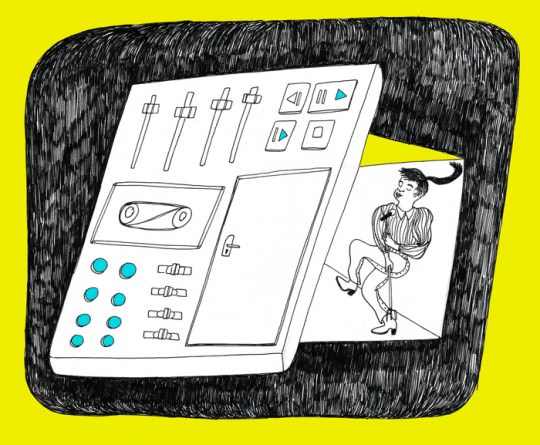 My friend Nora drums in a band, but recently she decided she wanted to make a solo record, on her own, in her bedroom. She borrowed a four-track recorder, a few microphones, and some instruments. She had little idea what she was doing—she just had lyrics and melodies worked out in her head. She called her friends who’d done home recording before and found that although they could explain how to plug things in and set up, everyone gave her the same basic advice: you figure it out as you go along.

If you are just starting to play music or write songs, obviously you don’t need or want to go into an expensive professional recording studio. Recording your work in a simple and easy way at home—on your computer, your phone, a four-track, a boombox—is fun and also a great way to collect your ideas. You can record songs for your own use–in order to keep track of things as you work on them; to hone or finesse structure, melodies, or lyrics; to experiment. You can also record for the usual reason—to share what you are doing with the world.

While you may have musician friends or other resources to lean on, recording your own music at home is one long show of self-reliance. When you play with a band or record with other people, you can use them and their skills to anchor what you’re doing and give you feedback. Here you have to overcome any fear of going it alone and just trust your instincts. All you have are your opinion, your skills, your gear, and your mind. Any problems and solutions are going to be yours to handle. You are the only one who can decide if what you’re doing is good. Total freedom!

Home recording is about working with the defects and the mistakes, and sometimes letting the mistakes take over and be fabulous and weird. Maybe your drums are actually two buckets and a cookie sheet. Embrace that. Embrace that you’re recording your solos in the laundry room while the cat uses the litter box.

In a professional recording studio, the producer is going to be able to turn a zillion knobs and bring in five different snare drums to get the right sound. Maybe, here, in your bedroom, you don’t have a kick drum and don’t know anyone who does, so you’re going to have to run the microphone out back and record yourself stomping on the porch. Or kick a cardboard box a few times and sample it. Try mic’ing any and all sounds that you can, and see what you come up with.

Recording solo also means really getting to know your gear, all of it, inside and out. Learn its complete range of sounds; twist all the dials into different configurations, try different tunings, beat your guitar strings with your dog’s chew toy and then process the sound in GarageBand until it sounds like an underwater harp. By experimenting a ton before you start recording, you’ll learn all your sound options. By the end, you will be a lot less self-conscious about creating music, and you’ll also have recordings that are 100% you.

The only thing to be wary of with home recording is that infinite quest to make what you are doing “perfect.” Since there’s no money or studio time involved, you can fix and refix and redo and add some chimes and then add some other, louder chimes… And suddenly it’s three months later, and you wake from your Rip Van Winkle–like creative state to find that you are still working on the same song and that you’ve tinkered it to death. Don’t let what you’re doing become a permanent work-in-progress.

Here are some ways to record at home, other than on a boombox or using the built-in app on your phone (the FL Studio Mobile app is available for the iPhone and iPad, and GarageBand has an iPhone app). You will likely need to pick up some other bits of equipment, if you don’t know someone who can loan them to you. Here is a quick rundown:

Recording on your laptop:
GarageBand is the recording software that comes with Apple computers. One of the great things about it is that if you’re cool with keeping things ultra-simple, you don’t need any other equipment to start recording. You can use the built-in mic on your laptop and the virtual instruments in the software and start working on your triple album today. You can also download Audacity for free, which works for both PCs and Macs, and is really basic and perfect for doing home demos or other recordings where you’re not gonna get too complicated—and you can Google up all manner of tutorials for it. (Apple offers some GarageBand tutorials here.)

Recording on a four-track:
Before there was GarageBand, there was the four-track. The Tascam four-track cassette recorder was the standard in the pre-computer-magic era. The classic Tascam records on cassette tapes, and the resulting four-track recordings sound raw and rock & roll in a way that you can’t duplicate with a computer. Tascam stopped manufacturing them last year, but you can totally find them on Craigslist or eBay for about $50 (the instruction manuals are available online). A four-track is perfect if you don’t have a computer to record on, or if your equipment budget is limited. The downside is that you are recording on a cassette and when you’re done, you can’t instantly toss your latest anthem up on your MySpace page (unless you get the digital four-track). But what it lacks in slickness the old Tascam makes up for in every other way; it’s low-tech, easy to find, and even easier to use.

Some other equipment you might need:
If you want to record live instruments or want a better mic to sing through, you have a few options: a cheapy USB mic costs about $20. They are for recording podcasts and aren’t ideal for mic’ing a live instrument, but you totally can—it’s just not going to sound amazing. A better/proper mic for recording vocals and instruments is the Blue Snowball, which costs about $100. You are also going to need a decent pair of headphones (not earbuds). Get the over-ear kind that look like earmuffs, starting around $20.

Some things to consider before you record your vocals:
How you sing in practice and at shows is not how you sing when you are recording. In those first two places, you are singing to be heard above all the other sounds. When you are recording, it’s usually just going to be you, with some headphones on, alone in a room. It’s only normal to feel bashful, but you have to confront that shyness and self-consciousness before it’s time to record. Give yourself a few weeks to really get comfortable with your voice. Sing your songs until singing out loud and unaccompanied feels like no big deal. Or as close to no big deal as you can get. Also, don’t eat dairy or drink anything cold before you do your vocals; they’ll make your voice mucous-y (ick).

Lastly, the most important thing is just to DO IT—just get started with whatever equipment you’ve got! Documenting your ideas is important, even if it’s just between you and your earbuds—and even if it’s just so in six months or six years you can go back and marvel at how far you have come (and/or laugh at how gross-gushy your love songs were). Home recording is a perspective-generating process; you can improve much more quickly—your skills, your sound—just by listening to your own recordings. Good luck! Have fun! ♦

This was adapted from Jessica’s book, The Girls’ Guide to Rocking: How to Start a Band, Book Gigs, and Get Rolling to Rock Stardom.