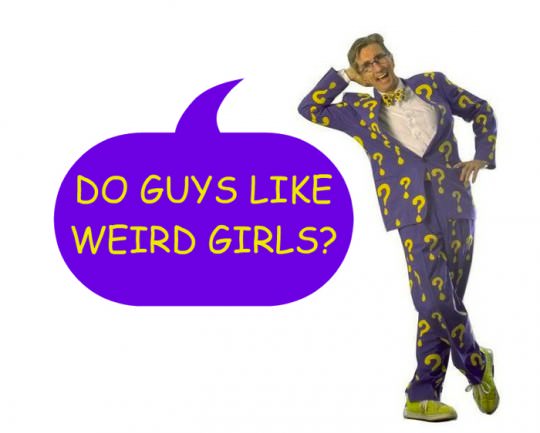 Do guys like weird girls? Would they ever date one? I’m weird. I admit it. It’s mostly the way I dress, and the kids calling me Google on account a how smart I am doesn’t help. But, I’ve never had a boyfriend. Are guys intimidated by my weirdness? Or creeped out by my awkwardness? I don’t really want a boyfriend now, and I definitely don’t need one, but since I’m in high school (as of yesterday) I should probably start worrying about that soon, according to teen movies. —Angela

No, I don’t think guys like weird girls. I think MEN like weird girls. I hope I’m not the first to tell you that girls mature faster than boys? Immaturity sleeps in the same bed as insecurity, fear, sarcasm, and all those other things that hurt our feelings sometimes. So yeah, boys can be intimidated by weird girls because weird girls usually reflect the thing that they lack, or are afraid to embrace: confidence, independence, courage—all the words that make us feel warm. And anyway, Google, you should be smart enough to know that teen movies are the TOTAL OPPOSITE of what being a teen is actually like. I’m not the teen-movie expert (kind of am actually), but isn’t it always the case that the weird girl wins out in the end? Come on now.

P.S. I didn’t have a high school boyfriend until I was a senior. Those were three very long, boring, obsessive years. My fashion icons were Andie from Pretty in Pink and Allison from The Breakfast Club. Does that answer your question?
P.P.S. That last line was sort of an insider joke about The Breakfast Club.
P.P.P.S. I’m a dork.

Maybe I’m just being melodramatic, but…why am I so awkward about sex? I’m 17, and I think about sex as much as a normal person, I believe. I’ve made out and done oral, but I’ve been single for a year now, so those things are kind of a distant memory. Now, I can’t imagine myself having sex. I find myself pushing away a lot of guys who seem to be sexually attracted to me because I feel threatened and uncomfortable. I can’t seem to get down this casualness that everyone else has about sex, but it’s frustrating to me because I’m not saving myself for marriage or anything. It’s starting to affect my self-esteem, because a lot of my friends and even a lot of people who write on Rookie seem to have that casual attitude about sex. And I just don’t feel like I’ll ever get over this awkwardness. What’s the deal?

1. I wonder if your dip in self-esteem came before your sexual awkwardness. The reason I say this is that usually when sex is all casual and non-awkwardy it’s because we’re super comfortable with our bodies and really understand how to get pleasure from just “whateves” sex times. Sounds like you just aren’t there yet.

2. NO ONE IS! EVERYTHING I JUST WROTE IS A MYTH ABOUT SEX FOR 98% OF THE FEMALE POPULATION! (*Not an actual statistic.)

3. I am trying to avoid this whole “you’re only 17 thing so don’t worry about it” answer because that’s such an annoying, condescending copout, and whenever I say something like that it’s usually because I don’t know how to answer a question.

4. I lost my virginity when I was 17. I was scared. It was awkward. It wasn’t like how all my friends had described it. It wasn’t even like how Judy Blume described it. It made me feel so much worse about myself because I didn’t like it and I thought there was something physically wrong with my body.

5. Now I am 32. SOMETIMES sex is awkward. Sometimes it hurts. Sometimes I feel so insecure about my body that I can’t relax. And not once, NOT ONCE, has it ever been “casual.” This is just my experience, which is important to note, because no one is right or wrong when it comes to matters of sex. Everyone has their own story, their own fears and deals and weirdness and sluttiness and all of it. There are SO many colors in the humping rainbow.

6. Let me also tell you that I too am super turned off by guys who act all “sexually attracted” to me. It’s just kind of cocky and gross and yeah, feeling put off by that is not weird. Unless I’m weird too, which is always a possibilty. But that would mean that there’s a million more weirdos just like us. So I guess that means that there’s actually no such thing as weird.

I have been dateless for all of the 15 1/2 years of my life. I guess it’s not a big deal, but it bothers me. It comes down to this: HOW do I effectively flirt with guys (and not seem sleazy)? —Anonymous

I think this is just a case of trial and error. I definitely didn’t go on a date for at least the first 17 1/2 years of my life. I tried by calling up guys and just talking and trying to be friends with them. It didn’t work, but I didn’t feel sleazy about it.

Flirting is just kind of hanging out more often than you usually would, so maybe just do that?

If you have a question for Lesley, please send it to [email protected].