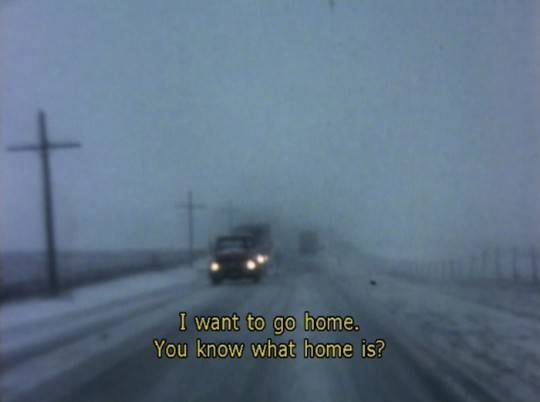 I’m excited about this month because I love winter and the excuse to stay inside all day. I love snow while it’s still pretty. And holidays while they’re still pretty, before everyone just gets sick of one another. I love forts and sweaters and hot chocolate. Actually, I’m going to take this opportunity to offer up the very helpful tip of putting fun-size Crunch bars in your hot chocolate. Just slipping that in there because it’s not exactly original or clever enough to be its own DIY post.

But as much as I love my bed and family and hot chocolate, I don’t always feel at home, at home. I don’t always feel at home in my hometown. I was first made aware of the idea that home could be an identity you find or make yourself when I saw No Direction Home, the documentary about Bob Dylan’s life through 1965. He was born into a small town in Minnesota that was boring and simple, and went so far as to say he could’ve been born to the wrong parents. And he hoped to find home through his relationship with music.

His music came to mean a lot to me. After getting through the phase where you’re like, “I saw a documentary and now I’m an expert!” I actually did devour a couple more movies about him, read his book, read books about him, and of course listened to his albums until I couldn’t not mouth the words along subconsciously. I taught myself guitar so I could play his songs, and me and my best friend performed them at a record store together. I decided I would one day write a masterpiece called “Song to Bobby,” based on his own “Song to Woody.” I started carrying around a notebook every day in case inspiration were to strike. Whenever I could, I related a school project to him. I made a little book illustrating his songs for no one to see but myself. In a night’s angst, I painted the lyrics of “Like a Rolling Stone” on my wall. Oh, and I had a shrine at some point. A whole corner of my room: vinyl records, books, pictures from magazines, paper cutouts, candles. (The candles part was a little joking. I will give myself that.) The point is: I had found what made me feel like I was home, and I was serious about immersing myself in it.

Then I found out Cat Power already did the “Song to Bobby” thing. Then I remembered a former friend of mine who had Green Day lyrics painted on her own walls. And the one with Rent lyrics. Then I saw Dylan live at Summerfest and realized that as much as I believed my connection to his music was special, a bunch of college dudes in cowboy hats being way too loud and way too drunk did, too. Then my dad said casually and nostalgically one day while picking me up from a friend’s that he, too, once knew all the words to Dylan’s best albums, and wasn’t it crazy that his daughter would go on to do the same? I realized then that I would go through many phases in my Journey As An Adolescent, and that this was only the first. That in a matter of time, I would forget what it was about his music that I thought was so great. We have no shared experiences, and his lyrics don’t describe my feelings or whatever. It always just sounded right.

And in time, that would still be enough.

While this obsession had been pretty angst-ridden, it was also totally sincere. And, as the jadedness of growing to somehow understand the world has slowly made my enthusiasm for anything pretty rare, I do get a little homesick for that first phase of being a person who absorbs things and thinks about them. That first phase was a time when I was so much in my own world that I wasn’t aware of what a cliché that world made me, and so in awe of it that I wouldn’t have cared anyway. At the same time, it was the last time I would feel totally childlike in my outlook on something. And that’s, well, kind of a bummer.

On occasion when I do feel that weird, nebulous homesickness, I can take a step back and realize I’m feeling detached because I’ve probably done something I don’t believe in recently, but most of the time I’m not that thoughtful, and things just feel wrong.

The thing that had always fascinated me the most about Bob was that he was constantly changing—from a shy Woody Guthrie impersonator, to one of those musicians who somehow get away with being a total dick onstage and to their fans because they’re suddenly so badass and oh my god look at those SUNGLASSES and did you ever SEE such attitude, to a recluse, to a gospel singer, etc., until eventually presenting this world with this.

I take comfort in knowing that it’s OK, then, for me to change too, and that, when I need to, Bob Dylan will find his way back into my life as needed. As long as I can put on one of his records, I can always find home.

OK, now you know I have a soul or whatever. Welcome to December.