Where did my feelings go?

When I was 12 years old, I had my first bout of what would prove to be a long-lasting relationship with anxiety and depression. My grandma died, I had a panic attack, and all of a sudden the colors of my childhood paled to a lackluster gray. The wonder and excitement of playing with Legos, jumping in leaf piles, and knowing close to nothing about the world subsided, leaving behind a dull, anxious ache. I wasn’t suicidal—I wasn’t even miserable. Just deflated. No longer living effortlessly. I could only think one thing, and that was, Where did my feelings go?

The years wore on, and I kept on wondering. I was officially depressed for a while and then, after some therapy and some thinking, officially OK. But even when I felt better, I wasn’t totally better. I didn’t get that blissful, carefree kid feeling back. Life wasn’t effortless like it used to be. I started wondering if that business back in the ’08 was really just a kick-start to the inevitable, and that something else was responsible for all of this. For this hole. Then I discovered my friends felt weird, too. They didn’t say so, but their newly adopted hobbies and disaffected demeanors told me enough. (I guess I didn’t say anything to them, either.) Something swooped down and snatched “feeling OK” from our brains. An emotional pterodactyl. An emotional pterodactyl named Puberty. 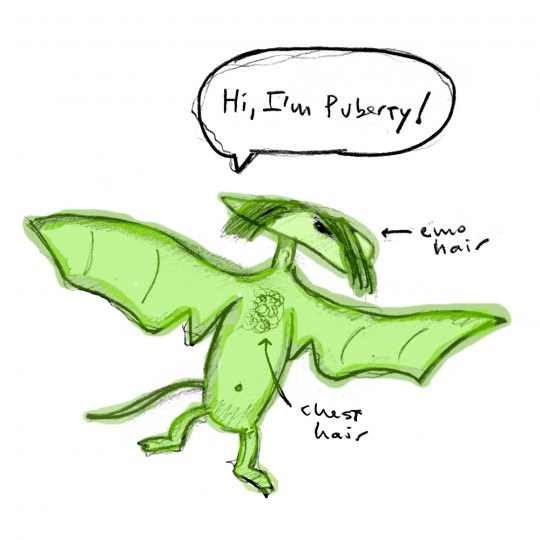 But that didn’t make much sense. I always thought that to be shafted by the process of growing up, something “real” had to happen. Some sort of bona fide suffering has to go down (maybe like the death of a grandma) before you can feel less happy. After all, discomfort doesn’t grow on trees! The weight of the world can’t just appear out of thin air!

Four years have passed, and I have yet to be Benjamin Buttoned. At that first panic attack, I was like David After Dentist, constantly asking myself, and my parents, and even a therapist, “Is this forever?” I used to be constantly afraid that something was short-circuiting in my brain, and that if I didn’t do something soon, the damage would be irreversible. That whatever chance I had of reverting back to childhood bliss would slip away. I guess now I realize that that really is what happened. Life won’t ever be as simple as playing with Legos and jumping in leaves again. It can’t be. If it were, there’d be no friction. No yang to our yin. Without bad, there’s no good, and if we all felt OK all the time, there’d be no point.

It seems like, as time goes on, every moment becomes a smaller and smaller slice in the whole pie of our life, and as that pie gets slowly eaten by time, each slice becomes more important. We zoom in, isolate, and savor that slice for every nugget of its deliciousness. As far as I can tell now, doing that works out just fine. But I lived the first four years of my adolescence thinking “savor the moment” was a gimmick, some sort of cherry grownups put atop life because they believe that life is a steaming pile of shit. I thought that “enjoy the little things in life” was code for “this sucks, but we make the best of it.” That scared me, because I don’t want to think that life is a steaming pile of shit! When I grow up, am I gonna think life sucks? Is some inescapable, adult-making monster—that emotional pterodactyl?—gonna force me to think that life sucks?

Maybe that’s another thing they can’t teach you in sex ed. You won’t feel weird forever. You can’t feel weird forever. Things change. That’s the reason you feel weird in the first place; things changed! And deep down, no matter how much I wish I could go back to the wonder years, live the simple life in the ole neighborhood, play with Hot Wheels and have my birthday parties at Chuck E. Cheese, I know that’s the way things should be. In all my unsureness, frustration, and feeling weird, I know it couldn’t be any other way. This too shall pass. ♦