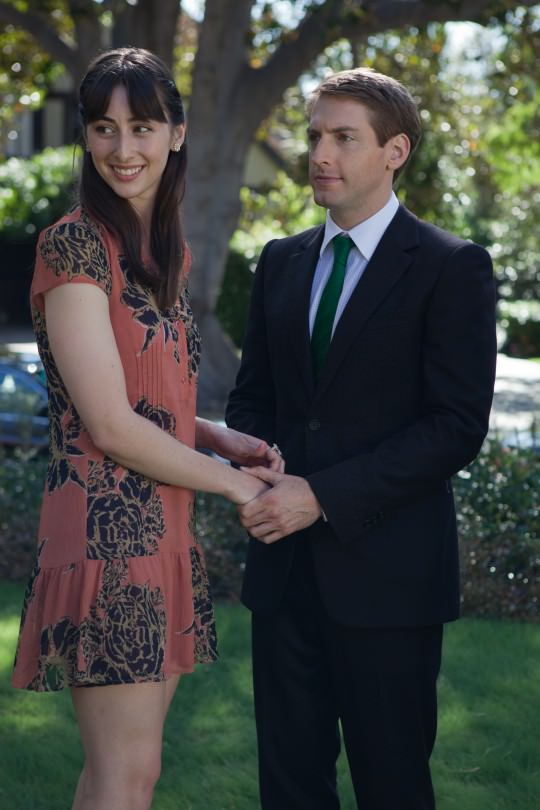 Can we talk about the feminist problem of this play—the fact that the plot revolves around whether Hero is a virgin and therefore worthy of the love of her father and her fiancé? Doesn’t her father say he wants to kill her when he thinks she’s had sex?

Yeah. But everything in the play is taken to a modern interpretation [in the movie] in the sense that, yes, they’re talking about whether or not she’s “a maid,” or a virgin. But what [her fiancé] Claudio’s dealing with is the idea that she’s into somebody else and that she’s made a fool of him. What [her father] Leonato’s dealing with is being publicly shamed. And that the closest person to him in his life, his daughter, has been lying to him. It was very much about playing the emotionality of two men who feel like they’ve been made fools of. It’s not about the hymen so much as it is about, uh…the human. The human, not the hymen! That’s my motto.

You know, you’re not gonna get around certain anachronistic and outdated concepts, but the emotionality about it isn’t outdated at all. Clark [Gregg, who plays Leonato] and I spent a lot of time talking about, well, how do you come back from telling your daughter she should die?

Does he tell her she should die in the movie?

It’s in the script: “Do not live, Hero, do not ope thine eyes.” But in that same scene, I have him embracing her fiercely, because he’s just so torn. He can’t figure out what to do. What he does is I think reprehensible, and so do we all, but we worked hard to understand that in his position what had just happened was socially completely devastating, and that’s what his whole life was based on. And that emotionally he felt completely betrayed. But by that same token, before that scene is done, he’s holding on to her, saying, if they’ve done something to her, I’ll kill them. We played it in such a way that he lost his temper completely, but then at the same time couldn’t not hold her.

Then there’s another problem, which is why would Hero take Claudio back after he’s been such a dick to her?

Getting her to forgive him was important, and part of that had to do with, when she finally says to him, “And surely as I live, I am a maid,” she doesn’t say it like, “It’s OK, I’m a virgin”; she says it like, “You were fucking wrong.” She’s fierce. A lot of lines that are often played laid-back and passive are her getting in his face. “Why would you think that about me? How could you do that?” She is a little tougher. And I also added a bit: in the funeral scene, where Claudio’s going down to the tomb to mourn for her and he’s all distraught, she’s actually watching. It’s a lovely image. And you can see her feel like, well, I’m still kinda pissed, but he clearly means it.

There’s been a teenage girl, or a little older, in almost everything you’ve done, and I wanna know what that fascination is about. Are you making up for the fact that you went to an all-boys school?

[Laughs] I think that obsession existed long before I went to an all-boys school. You don’t really grow obsessions late in life. I think they’re formed early.

I have never really known why I need to write about really strong adolescent girls. I do know that I have issues about helplessness, and that seeing [girls] portrayed as helpless, for all the years of my youth, got very old. I am much more interested in some of the older comedies, particularly the black-and-white comedies of the ’30s, when most of the movie stars were female and they actually had things to do and a lot to say before they were sort of sidelined in the mainstream, in movies. And I was raised by a super strong, very interesting woman. And I was also very tiny and helpless. Those are the things that I know about. But I still don’t know why my avatar’s a girl. But she always has been, and I’ve just given myself up to it.

What were you like as a teenager, other than helpless?

Um, I was annoying. But I was funny. As much as I annoyed almost everyone, I could make them laugh. I was a terrible procrastinator and, unless it was English class, kind of a terrible student, and I just…I hate that every day of my life. I regret that.

You should talk about that more, ’cause I’m in a really awful “I don’t care about school” phase and I need to get out of that.

I don’t think I ever had an “I don’t care” phase, because I went to schools—particularly Winchester—that were so good that you really got engaged in the process of learning. I just had a mental block against doing work, even if it was work that I loved, and that makes me sad. It plagues me. Like my girl avatar, it’s something I never really understood. Why would I sabotage myself? Because ultimately, I find, the class is gonna be as good as you decide it’s gonna be. You may have a terrible teacher. You may have a great teacher. But ultimately there is no such thing as a boring subject. It’s just a question of whether you’re going to decide to engage with it.

Math, I was good at, but I never really engaged. Literature was always the thing that had my heart. And I loved history, but I still could be lazy. I took a lot of languages—I can speak none of them now. I just really never got off my duff unless it was creating something. I always wanted to cut right to the part where you’re making something. I didn’t actually want to learn how. Which doesn’t work, by the way.

I didn’t really start writing till after college, didn’t realize I was a writer till after college. But once I started, I worked as hard as I could. All the time. I didn’t actually study writing, but I lived with a lot of it, and grew up with a lot of really good writers. Like with everything else, if I don’t lay the groundwork, if I don’t do the stuff that seems like it’s not that rewarding, I don’t get the reward later on. I feel that all the time. Not to sound like the biggest old fogey in the world, but it’s true.

So why do you think school doesn’t matter?

Like I know why it matters and everything. The thing is, I feel like you have this point of view when you’re a teenager that’s unique, the same way that I’ll never see things the same way I did when I was little again, where everything is all new. And I’m always itching to take advantage of that in ways I don’t think the schooling system encourages you to do. So I’m always writing or drawing or something…I don’t know. I think it’s also because I’ve always been a perfectionist and now I’m burned out from that as far as schoolwork goes. I think I was kept under the illusion that grades in middle school were really important, which they’re not, and now I’m all worn out.

You used up all your best, and now high school is gonna be a disaster. I do sometimes feel that school is a little counter-intuitively designed. I don’t think it necessarily takes the adolescent mindset or heartset into account enough. There is a need for exploration and change, and there are so many questions and there are so many priorities shifting and there’s so much shit going down, and our design for schools is pretty much “sit them down and give them facts.” I do think there are better ways to engage people in not just the accumulation of knowledge, but, you know, the desire, the habit of pursuing knowledge.

You said that you didn’t really realize that you were a writer after college. What happened for you to realize that?

A desperate need for funds. I was planning to go to northern California and make movies and I didn’t have any money at all, and I knew you could make money by writing a TV script—that’s how my father had made his living for many years, and I thought, well, TV is a lesser art form, but I’ll just try my hand at a script and maybe I can make enough money to get started. And the moment I started writing my first spec script, a script just to show people I could write or find out if I can, I fell madly in love with writing. And later on I fell madly in love with TV and realized, oh, most of the best writing isn’t in movies. It’s in this other place.

Were there any shows that made that clear to you?

Hill Street Blues was enormously influential for me. I’d never seen anybody quite do that.

Can you explain what that is a bit?

Hill Street Blues was a cop drama from the early ’80s, and its tonal shifts were startling and deliberate and unlike anything I’d seen on TV. Every week, every scene, the ground would just shift under your feet. You really didn’t know what kind of show you were gonna see. It was gonna be dramatic and people would cry and blah blah blah, but you also never knew when they were gonna suddenly drop something very funny or very tough or very unexpected. And that’s the only kind of TV I like to make. You go in not knowing, and most TV is about knowing. Mostly people [watching TV] are like, “Can I order potatoes again? Thank you for the potatoes. See you next week.” A lot of my favorite shows are potato shows. With Roseanne, for instance, you know what you’re in for. And Columbo. But I just like to change it up.