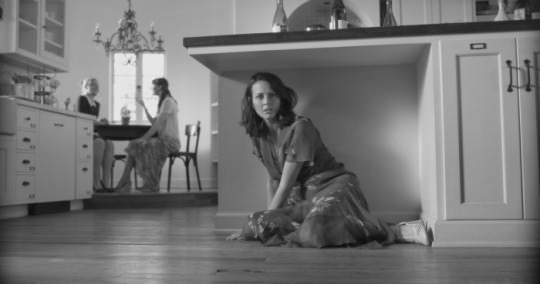 Amy Acker as Beatrice in Joss's new Much Ado About Nothing.

For anyone who has the nerve to be enthusiastic about things, a species I believe is commonly called “nerd” or “geek,” Joss Whedon is like a living embodiment of that presidential slogan about hope. A person might be laughed at in high school for reciting self-motivational mantras with rocket-ship metaphors, but these are the people who have the will and creative juices to go on to make great things, great and thoughtful and awesome things like Buffy the Vampire Slayer, Angel, Firefly, Serenity, Dr. Horrible’s Sing-Along Blog, Dollhouse, the upcoming Avengers movie, and now, a semi-modernized version of Shakespeare’s Much Ado About Nothing. Here, Joss talks about that homemade project and things of feminist concern, helps me get over myself and my attitude problem about school, and displays the wonderful knowledge and interestingness you gain when you have the nerve to be enthusiastic about things. And so, vote for Obama in 2008! Or…what? I don’t know what I’m saying anymore. Read the interview. Bye.

Not a problem at all. I’ll just jump right in then.

All right, let’s do this.

So The Avengers was like this huge superhero production, and really exhausting, I would imagine. After making it you should’ve taken a vacation, but instead you made another movie. I wanna know why, and what’s wrong with you.

There is something horribly wrong with me. I admit that fully. I’m not exactly sure how it happened. I was in New York at the end of the shoot of The Avengers, in the beginning of September. It had been about seven months since I’d slept for a full night. I was so crazed, and Kai, my wife, and I were talking about the vacation we were gonna take for our 20th anniversary of bein’ sweeties. We had October free, so we were going to Venice. Then we started talking about Much Ado—neither of us can remember how it came up. And Kai was like, “You know what? Make the movie. Venice isn’t sinking that fast.” I said, “Honey, there’s no way I can adapt the script and put it together in a month.” She’s like, “Yes, you can.” So I started talking to people about it. Then I realized how much work it would be and I was like, I have gone insane. This is a terrible idea. But at that point I’d already started getting people to commit, so it was like, I gotta put my head down and do it. It’s one of the weirder decisions I’ve ever made and absolutely the best.

Yeah. What if it turned out the other way!

It was exhausting, but it was the kind of exhaustion that feeds you and makes you strong. I mean, I’m very excited about The Avengers, and I hope people will be like yay! for that film, but you know, you make a movie like that piecemeal, a tiny bit at a time, and then you assemble those pieces, and half of what’s going to be great about the movie is not even built yet, because it’s special effects. And then I get to do this other thing, where I’m shooting by necessity about eight to 10 pages a day of just…meat. All the interactions, all the dialogue, all the silly, all the fun, all the visuals—they’re all there. They’re accomplished by the end of the day. You don’t go, “Oh, excellent! We got him walking into the room. Tomorrow he’ll say a word.” It’s a completely different experience.

You’ve worked with a lot of the actors in Much Ado before, and you filmed it in…I believe I read 12 days? on a shoestring budget and in a single house. Does that kind of seat-of-your-pants spirit come through in the movie at all or will it be like The Avengers: Shakespeare Edition?

[Laughs] It definitely will come through—though hopefully not so much that people go, “Wow, this looks like they shot it fast!” But yeah, it is literally homemade. ’Cause it was my house we shot it in.

Yeah. My wife designed the house. She’s an architect. That was another reason we finally decided to make the movie. I was like, I have the space, the whole movie takes place in one location. And I happen to live in it, and it happens to be beautiful. I mean, I’m in love with that house. My only regret was that we didn’t have any kind of rigs or steady cams or anything like that, so I couldn’t move from space to space as much as I wanted to. Because part of what’s beautiful about that house—and what I like about a film—is the flow.

I heard that you used to throw these, like, Shakespeare parties at your house.

They were Shakespeare readings. Shakespeare parties sounds like we all get in the big collars and quilted hose and dance to a lute. It’s just people showing up and reading. We started it years ago with some of the Buffy and Angel people—actors and writers and friends—and it turned into a huge monster of fun. Everybody just enjoyed each other enormously, learned about the text, got to pretend, got to show off a little, and got to make fools of themselves. Then it kinda died down for a while, because we had kids, and everything dies down when you have kids. But during its most fertile period, we did Much Ado with Amy [Acker] and Alexis [Denisof], and it became clear to me that if I was ever going to shoot a version of that play, this is my Beatrice and Benedick. They had both done an enormous amount of Shakespeare onstage, and they were the kind of people that even when they had tiny little parts, they would just blow it up, and not in a show-offy way. When they read Beatrice and Benedick, they were just delightful.

It all happened very organically.

Did filming Shakespeare feel different from your normal supernatural and superhero stuff, or did any of the super-blank tactics come in handy?

The most interesting thing to me was that it’s not that different. When you do Shakespeare, you have the burden of trying to make it all make sense. ’Cause some of it just doesn’t necessarily track. But there’s a way that it does, and you sort of have to find that. So I’m like, well, what’s up with Margaret? What’s up with Borachio? And why on earth would Don Pedro say this this late in the scene when it’s already been said? And one by one you figure out these problems, and you go, well, wait a minute, there’s a lot more here than I realized. And what I figured out was that my version of Much Ado is just exactly the way I make my shows and my [superhero] team movies. Everybody gets to step up and explain why they’re there. They get to have their moment, you know, that explains why in their world, they’re the center of this universe. Everybody gets to shine. They are all heroes. Especially Hero.

We have to read a bit of Shakespeare this year, and we did Romeo and Juliet last year, and I had a bit of trouble with it. It’s hard to read and appreciate something when it’s an assignment for school. Any ideas on making it easier? Did you like Shakespeare in high school?

Oh my god yes. Literally my favorite subject. I loved what he had to say, I loved all the darkness, I loved all the strangeness. Hamlet is my favorite—that would be no surprise to anybody who’s hung out with me. But I also found sometimes that I needed someone to interpret it for me. The best thing is to see it. Because there are certain things that don’t make sense until you really understand the context. I would always read a play before I saw a film of it, and I remember reading Henry V before I saw [Kenneth] Branagh’s version, and going, OK, this doesn’t make any sense to me at all. Then I saw the movie and saw, A, where it did make sense and I had missed it; and, B, where Branagh used the fact that it didn’t make sense to create his own emotional through line. Both of those things were life lessons for me. He’s great at making clear to an audience what he’s saying and what he’s feeling, and sort of going beyond the text and saying, here’s why they’re talking about this odd thing in the middle of this very emotional scene. And there’s a good deal of that in my Much Ado. A good deal of finding not just the point of the scene but the life beyond it.

I guess part of it is ’cause the plays are written to be performed. I think my favorite thing about what I have read of Shakespeare is how theatrical it is. Especially A Midsummer Night’s Dream.

Your Much Ado is a modernized version, right?

It’s modernized in the sense that it takes place today, or in a sort of nethertime. I mean, there are definitely iPhones about, everybody’s dressed rather elegantly, a lot of suits. This was a purely artistic consideration and had nothing to do with the fact that we had no budget and it was BYO costumes [laughs]. But we decided Leonato is clearly like a politician, and he lives the life of an extremely rich politician. One of the things we added is that he has what I refer to as a court photographer, who’s always just there, taking pictures, because everything in the play is a big event, and very important people are always having their pictures taken during big events. But also, the way she’s looking at everyone, and the way we’re looking at everyone—which is very often through glass or in a reflection or distorted—and the way they’re all looking at each other and not really seeing each other is very much kind of the point of the thing. Also, they’re all super drunk, not gonna lie. We sort of referred to it as the Kennedy compound. They’re very privileged, and they party very hard. They’re not responsible people. And everything they do in the play is evil, irresponsible, or just plain ridiculous. So it kind of makes sense that they’re all a little bit in their cups.

Is there anything in it that you think would appeal especially to A Teenage Girl?

I think Beatrice is one of the great female characters that Shakespeare ever wrote. She is extraordinarily witty. And generally speaking, Benedick—he may get the last word in the play, but not generally around her.

There is also an element where everybody behaves like a bunch of teenagers. Status is everything, and everyone’s always forming little cliques and either turning against or trying to help other people, and gossip nearly destroys Hero and tears everything apart. It is a very fraught little world that would be recognizable to anyone who’s ever been in a school.

What I’m saying is, the villain in Much Ado is gossip.