Why are all these girls smiling? 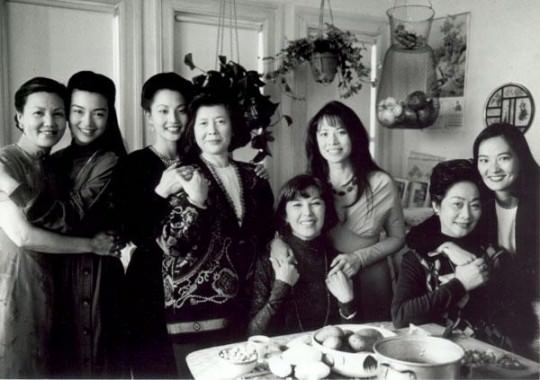 “Damn. Do all Chinese people have such depressing lives?”

“Yep,” I said, because I was 13, and because no one had ever told me what you’re supposed to do if you’re in ninth grade and reading The Joy Luck Club for English class and you happen to be Chinese just like the main characters in the book, and apparently no one in your town has ever met another real-life Chinese person before, and now you are expected to speak for every single Chinese person who has ever lived or will live, even though you are still just figuring out how to speak for yourself.

“Huh,” the other kids said.

And just like that, my world, which had always felt so infinite and indescribable and complicated, was suddenly tiny, reduced to a simple and finite and false narrative to fit into the only story my peers knew about Chinese immigrants in America: that they had suffered a lot in a strange, exotic, and horrible faraway place before coming to America, where they continued to suffer.

But in reality, when my parents came home from work, they didn’t just sit around talking about eating bitterness. Although sometimes they did talk about the sad old times, there were other times when we cracked jokes or sulked around in our own moodiness, or farted at the dinner table and fell to the ground laughing, or farted at the dinner table and yelled at each other for being disgusting, or did things by ourselves and ignored one another because there were so many things that were possible in our family, as was and is, I’m sure, the case in your family.

And even when my parents talked about the sad, old times, it wasn’t immediately obvious that what they were talking about were, in fact, sad, old times. My dad often told me stories about the time when he was sent to work on a collective farm, which were these state-owned farms in Communist China. On this particular farm, my father and the other boys had to shit outside where the pigs slept and in the summer, they’d sit around scratching their bums thanks to the mosquitoes who feasted on them while they pooped. During one especially cold winter, my dad became horribly constipated from eating too much flour (he and the other workers would often eat this cruddy, pancake-like concoction made of flour, water, and soy sauce whenever there wasn’t enough food) and, after not shitting for a week, he finally felt the stirrings of what he thought might be a turd. He ran outside, where it was below freezing, pulled down his pants, and started to push, only to realize—mid-turd—that he was still constipated. The half-turd he’d had managed to squeeze out had frozen and had to be snapped free from his butthole like a twig. (I’m so sorry, Dad, for sharing the details of your bowel movements with Rookie readers.)

When I first heard this story, I thought it was kind of funny. And also kind of sad. But in the ninth grade, there wasn’t space for a story like that to be both. In fact, when I was growing up, there weren’t very many stories at all about people like me and my family. The few instances when I encountered a character who dimly resembled me on TV or in movies or in a book were often profoundly alienating moments— I mean what did a Chinese exchange student (played by a Japanese-American actor) cheerfully asking Molly Ringwald in broken English, “What’s happening, hot stuff?” have to do with me?

And that’s why the story of my father’s frozen half-turd means so much to me. It reminds me that the story of our lives can be wonderful and depressing and funny and banal and bizarre and terrifying and traumatic, all at the same time, because you and I and everyone else in this world are vast, and we contain multitudes.

My best friend in sixth grade, Lata, was Indian. She used to invite me over to her house in the afternoons so that she could copy my homework and eat her mom’s homemade samosas in front of me without offering me a single one. “Can you hurry up?” she would say to me. “I need to copy it before my mom asks me to help with dinner.”

“Fuck no. You’re no saint,” Lata would shoot back. “You’re shitting yourself if you think you’re a saint.” Lata swore and lusted after boys and she had a fine booty at a time when mine was still suffering from acute depression, but mostly how I remember her is that she was the most ruthlessly resourceful girl I had ever met. She somehow got away with not learning anything in school while still getting grades almost as good as mine. Sometimes I would go through the trouble of writing down the wrong answers to homework assignments at her house and then going back to my house and redoing everything the right way.

The next year, I moved away to a nicer, wealthier town in Long Island, and we lost touch. At my new school I was one of two Asian kids in my honors class. Everyone else was white. In ninth grade, after we finished The Joy Luck Club, we read this book Shabanu: Daughter of the Wind, about a feisty twelve year old Muslim Pakistani girl who must marry a wealthy but horrible older man for the good of her family. That same year, our social studies teacher was handing out readings on arranged marriage in Indian society. I remember one about this woman who set herself on fire in an attempt to escape her abusive husband. God, I thought, it must be, like, the saddest thing in the world to be born Indian. (Also back then, I did not know how to distinguish between Indian and Pakistani.)

While I was filling myself with what I thought was totally commendable pity for all the poor, suffering Indian girls in the world, it never once occurred to me that my friend Lata, who never took bullshit from anyone, was also an Indian girl. It was almost as if the inclusion of Lata would have spoiled my ability to feel singularly sorry for Indian girls everywhere. I didn’t feel at all sorry for Lata. I wanted her to give me a freaking samosa and stop asking to copy my homework.

Here’s what I wish I knew back when I was in high school and so proud of myself for being the exceptionally compassionate, caring person I believed myself to be: focusing only on the pain and degradation of any oppressed group of people does another kind of damage to those individuals. It turns them into stereotypes of pain and damage and ignores everything else about them, including whether they’re funny, or stupid, or weird, or brilliant, or irreverent, or stylish, or creative, or boring, or selfish, or anything else that people are capable of being. It takes away their complexity and vastness and reduces people to one-dimensional figures. So yes, this is a post about style, but more than that, it’s a post about not denying these girls the dignity of their multitudes.

In that spirit, I present to you a selection of photos of black and brown and yellow girl gangs in American history whose stories will not be pinned down or relegated to the same old stereotypes, and whose poufs seemingly never flatten.