First kisses, Friendship Night, and the importance of snuggling.

Friday Playlist: Hanging Out With the Pink Ladies 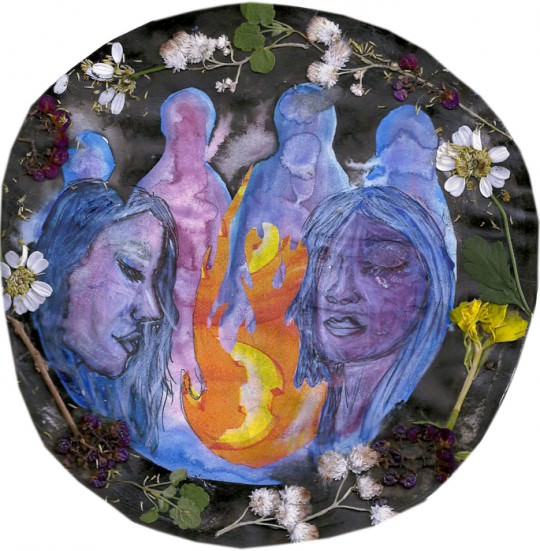 It takes a certain person to be a camp person. Camp people reading this know who they are. Rookie writers Lesley and Elizabeth are both camp people, plus best friends in real life. I know! It’s cute. And as camp people, one of the many things they have in common is their raging love for the summer bonding meccas of their respective youths. Elizabeth went to Camp Merriwood, an all-girls camp in New Hampshire; and Lesley went to Camp Summit, a coed camp in upstate New York.

We asked them to have a Gchat about their summer-camp experiences. And they did so! Here’s proof:

ES: How many years did you go and how long was it every summer?

ES: Five summers, ’89-’94. Seven weeks. In the wilds of New Hampshire. The best summers of my life, no contest. It is honestly the best thing my parents have ever done for me.

LA: It was the best thing my parents ever did for me, too. I still have dreams about camp and still go to the reunions and we all still love each other so much. We have a whole Facebook page where we all bond over mem’ries.

ES: I have dreams about camp too!

LA: I had my first kiss at camp. Were there any boys you guys used to see? Have dances with?

ES: Yes. We had a brother camp, Moosilauke, that we shared athletic fields with, and had dances and stuff with, but those boys weren’t cute. They were, like, our bros. Sometimes we snuck them over to hang out, but not for making out—just to chill and be a little bad, I guess? The really cute boys went to Kingswood and Deerwood. If you met a boy at a dance (I think we called them “socials” like it was 1952) and kissed after or whatevs, he gave you his shirt. The Deerwood ones were navy blue with a white D on the front.

LA: Cute! We had things we called “socials” and the big dances were called “discos.”

LA: It WAS stressful.

ES: I had middle school and high school to be worried about boys. I loved having the summer free.

LA: It’s weird, because I was friends with so many girls, but the girls in my group, whom I loved, ended up getting very competitive over guys.

LA: The puberty thing was a hot-button issue. The girls with the big boobs got boyfriends. So I got dissed a lot.

ES: Awww, Lessles! I learned how to shave my legs at camp, and how to put in a tampon.

ES: What a mindblower shaving was.

LA: When I first shaved my legs, I cut myself soooo deep.

ES: I have a scar on my inner thigh from camp. Some sort of driftwood incident.

LA: Hahaha driftwood incident. So much goes on at camp every summer. I think about things and still laugh. We had a lot of private jokes that seemed super funny at the time. And songs we would listen to together in a really serious way. Like “Fire and Rain” by James Taylor.

ES: JAMES TAYLOR WAS HUGE. We had this thing called Friendship Night. It was toward the end of the summer and it was dark outside and everyone had a lit candle. We would sing this song about friends and then file into the dining room, where you were supposed to sit in silence and write a letter to yourself to read the next year. If you were a returning camper, you would have all your letters from the summers before to read. I would kill to find those letters. WHAT did I write to myself at 15??!?!?!

LA: I have a big bag of the letters I used to write to my parents from camp. “Dear Mom, send me a package. Love, Lesley.”

ES: Hahaha. I got drunk for the first time at camp. When you were 14 you got to go on a trip to MONTREAL, where the drinking age is 18. They sent all these 14-year-olds with a few 21-year-old college girls. The tradition was to buy cases of beer and get wasted in your hotel room. Because at least one girl could pass for 18. It was the first time I ever really drank beer. It was so gross to me. But I chugged it all night, like seven beers! I can’t even drink that much now. We were WASTED.

LA: Did your counselors enourage it or something?

ES: No. But they would go out on their own and we were, like, wasted in a hotel.

LA: Sounds so fun. I went to an art program when I was a junior in high school called the Bennington July Program. Me and this girl drank Scope to “get drunk” and then we made out with each other.

ES: You had such a Sapphic teenagedom.

LA: Did any of your girl friends at camp make out? Secret lesbians or bi-curious?

ES: There was a lot of nonsexual affection. Like, we slept on these tiiiiiny cots? And it was customary to share one with your best friend. Me and Melissa Stevens shared a teensy cot for weeks.

LA: Aww cute. Lizzie I wanna snugs with you in a non-lez way!

LA: Some girls get freaked out but not this girl!

LA: OK I think this is a good ending. A plan to snuggle. An all-girl snuggle gang. Me and you are the leaders.

ES: I love this gang. You get jumped in by a lot of hugz. And ear nuzzles.

LA: In conclusion, summer camp is about snuggling with your friends. OK let’s make sure this is saved. Wait, do you know how to save? I just tried to copy and paste and it didn’t work.

ES: I think we can just check Chats?