A Love Letter to R&B Girl Groups of the ’90s

When else was it cool to wear almost the exact same outfit as your friends BUT NOT QUITE? 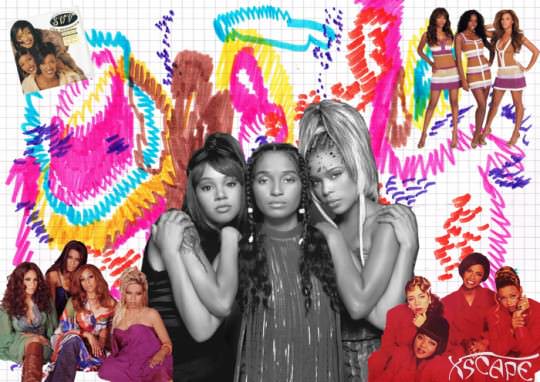 If you were a teen during the ’90s R&B girl-group renaissance like I was, or even if you’ve more recently been exposed to some of their music, you may very well think of groups like En Vogue, Xscape, Sisters With Voices (SWV), TLC, and, later, Destiny’s Child. Ladies who riffed and swayed their way into my living room (via the Box, of course) and my heart. I simultaneously looked up to them and identified with them, coveting their impeccable style and undeniable sex appeal while marveling at how accurately they captured the adolescent intricacies of my boy-crazy mind.

Like their cultural predecessors from the Motown era—the Supremes, the Ronettes, the Marvelettes—these groups were in many ways adhering to a classic model: talented, beautiful black women singing what were for the most part straightforward rhythm-and-blues tracks with gusto and showmanship. But they were also doing something new: their songs tackled themes like sex and relationships from a female perspective. These ladies, with their soul-baring harmonies and midriff-baring crop tops (always paired with baggy pants), were able to redefine the R&B genre, and to reach new audiences for crossover success.

And did they ever deserve it. They were all so talented! Yes, even the groups that came together less-than-organically, with the occasional help from music industry manipulation or aggressive stage moms, were brimming with talent.

I’ll never forget the first time I saw the video for Xscape’s “Just Kickin’ It.”

I knew smooth when I saw it. The women in that video rocking bandanas and baggie jeans and winding hard and slow to the beat, well, that was smooth. And it wasn’t just a pop-culture sugar rush; that song stirs a deep nostalgia in me. When I first heard them, the lyrics “Kick off your shoes ’n’ relax your feet / Party on down to the Xscape beat / Just kick it” connected perfectly with a vision I had of a perfect day spent hanging out with my best friends, talking about crushes. That song made me feel nostalgic before I knew what nostalgia was.

Some were better known than others. 702’s “Where My Girls At?” is one of those songs that blew up 10 years ago, but can still make the occasional cameo in my pre-party or cleaning playlist. It gets stuck in my head every time.

Total is that group whose song you’re always singing, even though you may not even know whose song it is. (They’re the ones singing the hook on “One More Chance” with Biggie, for example).

All Saints’ “Never Ever” is THE best song to sing in the shower. (Don’t believe me? Try for yourself! The harmonies are on point.)

And MoKenStef’s “He’s Mine” makes me feel guilty even as I love to sing along, as does TLC’s “Creep.”

These groups weren’t explicitly political like some of their hip-hop contemporaries, but there was a message of empowerment in their music nonetheless. En Vogue, TLC, and Destiny’s Child consistently dished out sage and pertinent advice wrapped in gorgeous, matching (but not identical) packages (see here, or here) (I mean seriously, when else was it cool to wear almost the exact same outfit as your friends BUT NOT QUITE?).

If I was feeling trapped in a bad situation, En Vogue reminded me I just needed a “positive change” and to “free [my] mind.” TLC encouraged me not to “go chasing waterfalls” or “mess with scrubs.” And SWV taught me to admit when I was “so weak in the knees I [could] hardly speak.”

Female singing groups had (have) to work hard to be defined outside of their sex appeal and their connections to male artists and record executives. Eventually, we know that stars like Beyoncé Knowles and Lisa “Left-Eye” Lopes (RIP) emerged from the ’90s girl-group renaissance as icons, and their cultural influence is a given these days. That’s fair; every genre has its breakout stars. But for me, there will always be something especially powerful about what these trios and quartets were putting out back then. It wasn’t just about their music, style, or talent, though all three were groundbreaking. A big part of their musical and cultural power came from their girl-gang status. By making music together, they were defying cultural stereotypes and expectations of jealousy and hatred among women, and making sisterhood look damn good. That’s why ’90s R&B girl groups are my favorite girl gangs of all. ♦