Literally the Best Thing Ever: The Macy’s Thanksgiving Day Parade

It’s an onslaught of corniness, giant balloons, lip-syncing pop stars, and high school marching bands. And it is WONDERFUL. 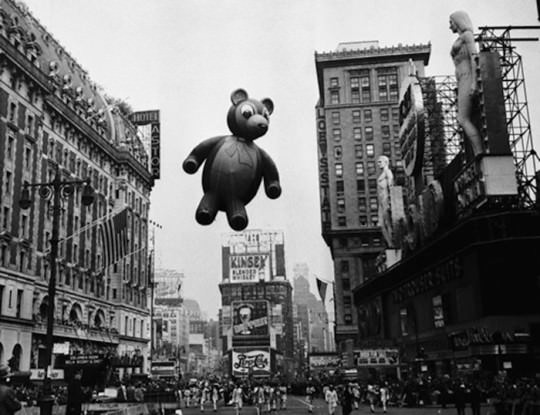 Somewhere toward the end of my teens, I lost the ability to sleep in, even when I tried. I’d wake up thinking that it was noon, only to discover it was actually 6:45 AM. Determined to stay in bed and be lazy, I started watching early-morning television. One year, staying at my parents’ house for Thanksgiving, I again awoke at the crack of dawn, and, snuggled in my bed, started watching TV. As time ticked on, I noticed a delicious cinnamon smell wafting in from the kitchen. The lazy side of me wanted to stay in my warm, soft bed. But the industrious side said, “Get up, stupid, you’re missing the cinnamon buns!” And so off I went to the kitchen, dragging my blanket behind me.

My mother was in the middle of making herself a cup of French-vanilla coffee when she spotted her lazy middle child hovering over the giant tray of hot cinnamon buns on the kitchen table. “You’re up!” she said, “Good! We’re all downstairs getting ready to watch the parade.”

I’ll be honest: I used to hate the Macy’s Thanksgiving Day Parade. I found it unbearably corny and couldn’t understand why everyone in my family was obsessed with watching it every year. Here are two things I have learned as I’ve gotten older: one, that it’s worth it to spend as much time as you can with your family; and two, that many seemingly unpleasant experiences improve drastically with the addition of giant cinnamon buns and French-vanilla coffee. And so, despite my longstanding eye-roll policy regarding the parade, I followed my mom downstairs, plopped myself on the couch with my big dumb blanket, and prepared myself for an onslaught of corniness, which is exactly what I got. But you know what? It was the BEST.

The parade itself hadn’t changed, of course. I’m not sure if it was age or just a cinnamon-vanilla-blanket happiness haze, but that particular Macy’s parade was the one that kicked off my now-undying love for the tradition. Now, every year, I look forward to breakfast pastries and several hours of ridiculousness as Matt Lauer and company introduce giant balloons, floats, marching bands, dance crews, and pop stars.

The trick to enjoying the Macy’s parade is to embrace the corniness and absurdity. The whole thing is amazingly bizarre, when you think about it: Matt Lauer will spend five minutes talking about an enormous floating Snoopy balloon, some Disney star will lip-sync in the most obvious way possible, an actor will flash an “I’m contractually obligated to be here” smile while waving from atop a float, some Broadway performers will belt out a few numbers, five bazillion high school marching bands will put on impressive shows, and everyone will flip out when Santa Claus comes to town, because Macy’s doesn’t mess around in the casting department, and their Santas are always on point. And then, periodically interrupting all of this are the first Christmas commercials, and if you can’t find the hilarity in the only time of year when people are shown on television losing their minds over green bean casserole, well, I don’t think I can help you.

As a bonus, the parade is immediately followed by the Westminster Kennel Club Dog Show, a several-hour spectacle of people in fancy suits running their perfectly groomed dogs around an AstroTurfed stadium. As far as holiday programming goes, this is a tough one-two punch to beat: first you get to see Kermit the Frog as a giant balloon, floating down the streets of New York City, and then you get to watch a dog beauty contest. And, perhaps best of all, you can enjoy all of this madness—the balloons, the bands, the floats, the silly host banter, the disgruntled actors, the lip-syncing pop stars, the beauty-pageant dogs—from the comfort of your couch, while surrounded by your loved ones, eating cinnamon buns and pumpkin pie. If that’s not something to be thankful for, I’m not sure what is. ♦