Literally the Best Thing Ever: The Golden Girls

I relate to them more than anything I see on the CW about teens or young adults.

About a Girl: An Interview With Blake Nelson 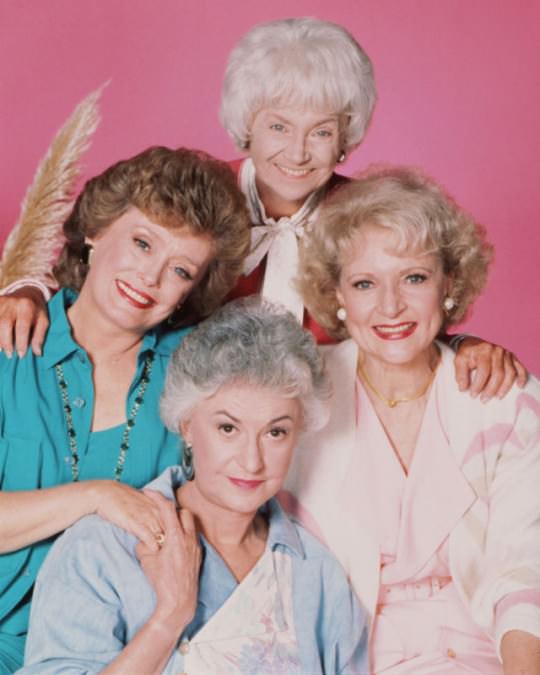 What do you most appreciate in a close friend? I need certain qualities like honesty, trust, loyalty, and the ability to crack a mean dirty joke. And you know who embodies all of these qualities pretty much better than anybody? The characters on The Golden Girls. The show, which aired in the ’80s and ’90s, was about four Florida women in their “golden oldie” years living together as roommates and best friends. Despite their advanced age, I relate to them more than anything I see on the CW about teens or young adults.

The group was made up of Dorothy, a dour, intellectual woman with a sharp sense of humor; Blanche, an egotistical Southern belle with a rapacious appetite for male company; Rose, a sweetheart space cadet who could never quite keep up with the others; and Sophia, Dorothy’s tiny, wickedly funny mother. Although they were all vastly different, it would be a mistake to lock them into these archetypes as if they were frothy Candace Bushnell characters. Don’t get me wrong, the over-the-top ladies of Sex and the City have their place and time, but it’s definitely far away from the real-world scenarios that unfolded in the Golden Girls’ wicker-furnished stronghold in Miami. These girls—my girls—were too fast-paced to pause for rhetorical laptop musings and cosmos, despite being at least a decade older. With SATC, people are quick to identify with one particular character—“I’m a Carrie,” “I’m a Miranda,” etc.—but you can see parts of yourself in each Golden Girl, because of their complex charms, varied histories, and perspectives on social issues.

Each Golden Girl is a life idol to me in her own specific way, from Rose’s indefatigable (if somewhat dopey) sweetness, to Blanche’s self-confidence and refusal to be slut-shamed, to Sophia’s hard-assed old-world wisdom, to Dorothy’s…well, everything about her, really. Dorothy, impeccably portrayed by Bea Arthur, dominates both the house and my heart with her intelligence and verve. You know that girl in your high school who’s not only waaay more well-read than everyone around her, but can also apply her smarts to the kind of impossibly perfect, well-timed quips that stick with you for days? Dorothy is that girl’s spiritual grandmother. She reminds me of my best friend in the world, Lilly, despite the fact that Lilly has a mohawk as opposed to a well-coiffed silver bouffant. The Golden Girls made older women visible in a way they hadn’t been before: as people with active social lives, beautiful clothing, fulfilling jobs, and, best of all, friendships that rang true to people of all ages. The show actually makes me less nervous about getting older, in a way.

You know how you love your best friend because he or she tells you when you’re acting insane, melodramatic, or otherwise over the top? Dorothy, Blanche, Rose, and especially Sophia are often hysterically, devastatingly honest with one another in the same way. Nothing is off limits, and the topics range in outrageousness from Blanche’s robust sex life to Rose’s dimwitted stories about growing up on a farm in Minnesota. Their candidness with one another is way more affectionate than the guarded niceness of other sitcoms I’ve seen, or the feigned, outré bitchiness of shows like Gossip Girl. Also, they say shit to each other that you have to love somebody to be able to say, or else you’re just a terrible person. Don’t we all reserve a special, albeit kind of awful, realness for the people we hold dearest?

These four AARP-eligible mavens focus not only on getting to know one another, but also on exploring and deconstructing just about every controversial issue of their day without glossing them over or working toward a saccharine moral. One of my favorite episodes, “Adult Education,” has Blanche clashing with a professor who teaches a difficult class at her night school. She approaches the guy, asking about how to improve her grade, and, as the wink-nudginess of the title suggests, he offers to swap her a roll in the hay for a guaranteed A. When she tells her friends about it, they’re justifiably outraged, and Dorothy gives Blanche the courage to report his ass. A big part of this is Dorothy sharing her own story about the importance of refusing to stand for a man misusing his privilege and perceived authority in a sexual way. Being the queen she always was, Dorothy went to the board of education, which investigated the case and forced him to resign. “Of course, much later, I found out I was not the only person he had harassed,” Dorothy tells Blanche. “I spoke out, and because I did, a lot of other women didn’t have to go through the same thing.” AMAZING, IMPORTANT, TRUE. In this moment, Dorothy basically lifted the text of every feminist zine to ever exist and translated it into prime-time gold. It sounds crazy, but I actually channeled Blanche when I had to confront my own harassers at a certain point in my education.

Blanche eventually sits down with the dean of her school, and he declines to take her seriously and tries to bury her problem in the bureaucratic purgatory that is sexual-harassment paperwork. When she tells him that she won’t be ignored and needs him to actually deal with the problem, he asks her if she has any witnesses, which she doesn’t. He then parrots the much-beloved refrain of any and every idiot who has tried to shut up a female victim of sexual wrongdoing: “Without substantial evidence, it’s your word against his, and a man’s career is at stake.” THIS EXACT SITUATION HAS HAPPENED TO ME, and although I hope it hasn’t happened to you, too, I wouldn’t be surprised if you or your friends have gone through it as well. Maybe this is why I felt so gratified when, instead of standing for this tired old trope, Blanche essentially tells him to go fuck himself before storming out of his office. She wills herself to earn the grade with hard work, then confronts the professor with this beauty of a monologue: “I, sir, am a lady. Maybe not the smartest lady in the world, but I do know that my self-respect is more important than passing your damn course, and you, sir, can kiss my A!” She underscores this (admittedly corny, but still awesome) last line by shoving her finished exam against his chest, to wild cheers and applause from the studio audience and tons of melty swooning and fist-pumping from me.

The girls also had the bitchinest style around, from Blanche’s low-cut sequins and kitten heels to Dorothy’s swingy chiffon blouses. Even Sophia had a fashion trademark: her wicker-and-bamboo purse can be seen in just about every episode, often blending in with the living-room furniture. Their fashion sense is equal parts hysterically dated and authentically brilliant, and I’m often torn between trying to give the weighty topics on the show their due and coveting the ladies’ insanely great oversized-teddy-bear-sweater-with-pantyhose outfits. Luckily, there’s more than enough room for both.

Even if I weren’t totally biased as a result of loving their characters so much, I’d find that the real women behind the Golden Girls are just as admirable and socially prescient as their TV counterparts. While I don’t want to understate the importance of the effective, amazing work Rue McClanahan and Betty White did for animal-rights charities, Bea Arthur’s lifelong devotion to working with oppressed communities is especially touching. Over the course of her career, she used her fame to champion the rights of women (duh), the elderly, Jewish people, and, perhaps most notably, LGBTQ people. The legacy of her altruism continued even after she died in 2010: She bequeathed $300,000 of her estate to the Ali Forney Center, an incredible organization that provides housing and so much more to homeless LGBTQ youth in New York City. Thanks to Bea, this is now my charity of choice.

Onscreen and off, these ladies fought hard for what they believed in, whether it came to friendship, social consciousness, or monochromatic pantsuits. Every episode was a study in girl love and strength. Plus, if you watch it with your grandma, I guarantee you a great bonding experience—when else will you both be able to giggle together and talk openly about something as serious as sexual harassment? The Golden Girls might even make you wish you were closer to her age, so you could run with television’s ultimate girl gang. ♦