Literally the Best Thing Ever: The Baby-sitters Club

Looking after children wasn’t the point.

Play Well With Others 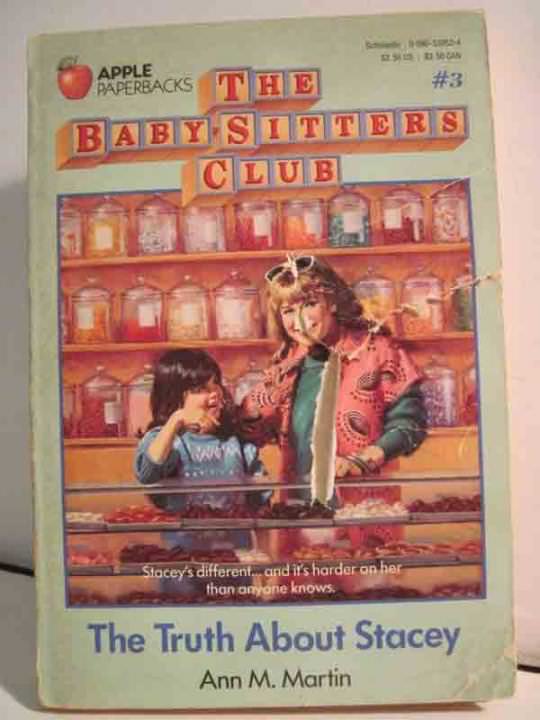 The Baby-sitters Club is a long series of books about a group of girls who… babysit. When I was younger, I really, really wanted to be a member of the BSC, despite the fact that I didn’t really like kids. Babysitting wasn’t the point. The point was that the BSC was made up of the coolest girls EVER. And they got to do the coolest things, like travel to Europe and star in ballets and stay the same age for years and years (seriously, they had like two Halloweens and six summer vacations and never made it to high school). Being in the Baby-sitters Club meant you had it all.

The club started off with four girls: Kristy, Claudia, Mary Anne, and Stacey. It grew to about 10 or 15 members in the end, if you count temporary members. Each character had her own UNIQUE personality, complete with her own hobbies (softball, ballet, horseback riding), quirks (banging gavels, hiding candy), and clothing style (more on that later).

Also, quite a few of the girls and/or children suffered from TERRIBLE LIFE-THREATENING DISEASES like diabetes and asthma. This is not an exaggeration in the slightest. If Stacey ate a chocolate bar, she was pretty much doomed to go on a sugar binge and end up in the hospital. This was mentioned in every book, because diabetes was the worst thing that could ever happen to someone. Unless you were Abby, whose love of sports threatened her life every day because of her asthma attacks. Or Anna, whose diagnosis of scoliosis meant a horrifying future of being caged in metal undergarments. I think these were actually supposed to be lessons on diversity and overcoming challenges, but they only succeeded in making me want a disease of my own so I could be doted on by my caring friends. And then I was diagnosed with asthma and no one cared because in real life every other kid has asthma and it’s actually no big deal. Dreams crushed.

But back to the girls. They were awesome. How awesome? Let’s look at Claudia, the most flamboyant member of the group. She was an ARTIST and she had an amazing sense of style, so amazing that eventually the internet was created just to have on it a blog called What Claudia Wore. She was also addicted to candy and hid it in every corner of her room (leading to lots of sad moments for Stacey, who had to munch on pretzels while Claudia passed out the goodies). And she was bad at spelling, which is notable because many chapters started off with journal entries, and Claudia’s were just riddled with errors. I’m sure at some point she misspelled her own name.

Not everyone could reach Claudia-levels of uniqueness; some of the girls filled well-worn niches from stereotypical high school life. There’s Kristy, the tomboy. Mary Anne, the shy one. Mallory, the bookworm. Etc. The crazy thing was that they were all friends. Best friends. Sure, there were fights and I think I remember the club breaking up at one point, but it never lasted. Because if there was a True Love version of friendships, these girls had it.

They also dealt with real-life issues, apart from creator Ann M. Martin’s weird obsession with chronic illnesses. Several of the members had divorced parents and blended families. Mary Anne and Abby had both lost parents, and Claudia lost her beloved grandmother early in the series. They dealt with racism and child abuse and the death of a teenage friend. Sometimes these issues were comically heavy-handed, but they were there, and they made The Baby-sitter’s Club feel somewhat real.

And through their lives, their successful businesses and jet-setting adventures, I was able to dream. Even as a 13-year-old, I could be successful and have awesome friends and amazing experiences. Because I was only 13 for 12 months, some of that had to happen a little later, but it did.

If you haven’t read these books (or one of the many spin-off series), get to the library right now and pick one up. You’ll laugh, you’ll cry, and you’ll start drawing little hearts over your i’s, because that’s what babysitters do. ♦