In Defense of the Spice Girls

We thought they were stupid, plastic, and bad for women. We were wrong. 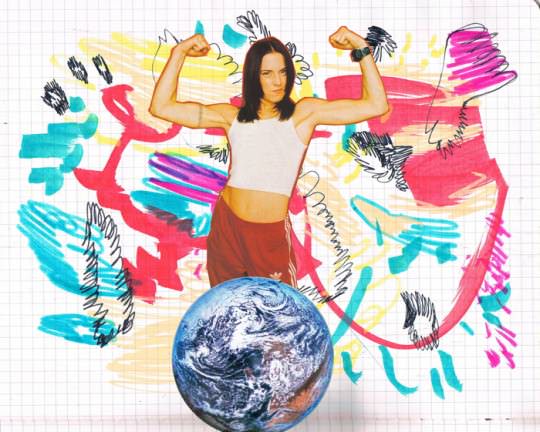 In the late ’90s, there were few people on earth I hated more than the Spice Girls. I was not alone. The Spice Girls had plenty of fans—usually very young girls—but most adults simply could not stand them. They were so peppy! So poppy! So perky! So…ugh. An article in Jane magazine contained the line “One of the bigger tragedies of 1997, in my opinion, is the success of prefab pop stars the Spice Girls.” Roger Ebert was forced to review their movie Spice World, and was not pleased: “Let’s face it, the Spice Girls could be duplicated by any five women under the age of 30 standing in line at Dunkin’ Donuts.”

But this was nothing compared with what the Spice Girls got from feminist media. In the Bitch Magazine anthology Bitchfest, the Spice Girls are mentioned at least twice, and not in happy tones: Rita Hao worries that “the Spice Girls end up pushing a vision of femininity and feminism that re-creates women as rather dim.” Rachel Fudge grumps that “Riot Grrrls had already been loudly proclaiming the revolutionary power of girlhood…when the prefabricated, plasticized Spice Girls hit the scene prattling about ‘girl power.’” She also more or less credits them with ending Riot Grrrl itself. So: the Spice Girls were stupid, plastic, bad for women, and made Bratmobile cry. And if all of that was too subtle and understated for you, check out this article by the feminist Fay Weldon: “How the Spice Girls Have Killed Feminism, Subverted Morality, and Embarrassed Us All.”

Friends, sisters, Lady Gaga fans: I am here to tell you that we were wrong. It is time to mount a defense of the Spice Girls. Because here’s the thing: although we didn’t know what we had in those five perky, themed-outfit-wearing British ladies at the time, girlhood wouldn’t get such good publicity for at least another decade.

I get why people disliked the Spice Girls. It wasn’t just that their songs were often annoying and generic; it wasn’t just that they represented the unwelcome shift from the authentically guitar-bearing artistes of the early ’90s to the synthetic pop vixenry of the late ’90s (and, uh, now). There were plenty of reasons to be worried.

For starters, the Spice Girls were sold to us as a group of friends, just goofing off and making top-selling singles together. But they were actually a carefully selected group of strangers chosen, after hundreds of auditions, by entertainment managers Bob and Chris Herbert. They had endless merchandising and sponsorship deals, and were involved with everything from Pepsi ads to Polaroid ads to Barbie-style Spice Girls dolls. Everything about them—including their Scary/Posh/Sporty/etc. nicknames, which they came up with in collaboration with a magazine editor—was under the control of men or corporations. Geri Halliwell (“Ginger Spice”) almost didn’t make it into the group, because she looked older than the other girls; when they asked her age, she reportedly said, “I’m as old as you want me to be. I’ll be 10 with big boobs if you want.”

So. Not quite so Girl Powerful, then. All this behind-the-scenes male control, all this manufacturing and marketing, all the seductive, boy-friendly posing and pants-free tank tops at awards shows…well. It wasn’t hard to conclude that the pro-girl message was a big ol’ con.

That’s what I thought, anyway. Until I watched the movie Spice World, and came across the scene of Sporty Spice in full-on drag, gently caressing Baby Spice’s butt. Also notable: the scene where Ginger Spice scares off a potential date by talking about “feminism”—she actually uses the word feminism!—and her friends all laugh. At him.

Yes, the Spice Girls were created to cash in on “feminism” and “girl power,” at a time when those things were popular. Yes, the “Girl Power” slogan ripped off Riot Grrrl—although, actually, the Spice Girls ripped off girl groups like Salt-N-Pepa or TLC far more than they did Pacific Northwestern indie culture. But do you know what it looks like when someone “rips off” girls being empowered? Well, if the lyrics to “2 Become 1” are any example, it sort of looks like…girls being empowered.

OK. I’m going to make you a promise, right now. If Taylor Swift EVER writes a song in which she expresses how much she wants to bang some dude, but also sings about refusing to bang said dude until he puts on a condom—for that matter, if Taylor Swift ever sings about wanting to bang a dude, and includes lines like “are you as good as I remember, get it on, get it on,” rather than “it was enchanting to meet you,” or “today was a fairytale,” or “you are an elf from the vale of Lothlorien, will you shower me with pixie dust from your unicorn’s hooves, by which I mean let’s do it”—I will personally buy a physical copy of Speak Now. And I will eat it.

Of course, not all Spice Girls songs were subversive. In fact, their most famous song is straight-up terrible: “Wannabe,” which basically happened after hours of the Spice Girls singing, fake-rapping, and making up words at random were spliced together into something that sounded sorta-kinda like a song. Aside from being one of the most annoying things you’ll ever hear, it’s also impossible to erase from your memory: to this day, if I ask another girl roughly my age to “tell me what you want, what you really, really want,” she’ll promise to “tell you what I want, what I really, really want,” and we’ll go back and forth for a while, and then it will just end up that she wants to “zig-a-zig-haaaaa.” I don’t know why I keep asking.

The main “girl power” message from “Wannabe” was just “if you want to be my lover, you gotta get with my friends.” A lot of girls were not too thrilled with this message. Why weren’t the Spice Girls singing about something more substantial? Why this silly, lightweight, feel-good message? Why didn’t somebody answer the question of “tell me what you want, what you really, really want” with “better domestic-violence laws”?

Well. Leaving aside the question of whether the Spice Girls were effective policy makers, let me just contrast “if you want to be my lover, you gotta get with my friends” with this message of female solidarity, from another, more recent girl group:

I know you like me
I know you do
That’s why whenever I come around she’s all over you
And I know you want it
It’s easy to see
And in the back of your mind
I know you should be home with me
Don’t cha wish your girlfriend was hot like me?

Yeah. Feel bad about making fun of “zig-a-zig-haaaaa” now? Because I do. “Wannabe” was lightweight, shallow, and deeply goofy. But at least it was about liking other girls, not about hating them, being “hot,” and getting into mud-wrestling fights with other ladies for the sake of The Most Important Thing In Life, A Man.

There was lots of giggling, with the Spice Girls; there was lots of hugging; there were a lot of bright, colorful outfits; there was a lot of hyper, bubbly silliness, and sometimes it would just wear a cynical person right out. But the Spice Girls weren’t for cynical people. They were for very young girls—sometimes girls who were still in grade school. (Those Spice Girl dolls weren’t selling to 22-year-old gender-studies majors. At least not unironically.) And in the moment that those girls were starting to figure out what “girlhood” meant, to them, they were relying on an image of ladies having fun together and supporting one another. Maybe they were even reading interviews in which those ladies said things like this: “Just because you’ve got a short skirt on and a pair of tits, you can still say what you want to say. We’re still very strong.”

That was Baby Spice, who said that. Baby! The meek, cutesy one! We didn’t get another pop star willing to say stuff like this—or to dress up in drag and romance her bandmates—until Lady Gaga.

But we all kept complaining about the Spice Girls—especially us feminists. And eventually, they broke up. Big victory, right? Well, no. Because the Spice Girls were not replaced by other, more serious girl groups. They were replaced by Britney Spears. And Christina Aguilera. And others like them, setting the trend of iconic, sexy, solo pop superstars that persists up into our current day of Swift, Gaga, and Beyoncé. The Spice Girls had told the world, “If you wanna be my lover, you gotta get with my friends.” And the entertainment industry responded with, “Lose the friends. Then we’ll talk.”

In my defense, though, those Pepsi ads were rrrrreeeeally annoying. ♦