How to Use Picnik Without Looking Like a Tool

Picnik is an easy, free tool for photo editing. But there are dangers!

If you, like me, are too lazy to figure out how to use or illegally download Photoshop, Picnik is the easy, free alternative for photo editing. But it’s not hard to spot a Picnik photo from a mile away if the editing isn’t thought out. Here’s how to use Picnik without making something like this: 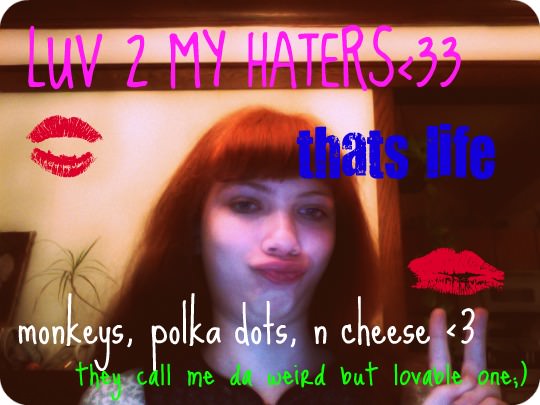 And because I am no better than people who are narcissistic via Photo Booth, I will use this photo I took of myself and my girl gang jacket using a self-timer as an example. Look at the ugly original version! I feel like such a fraud. 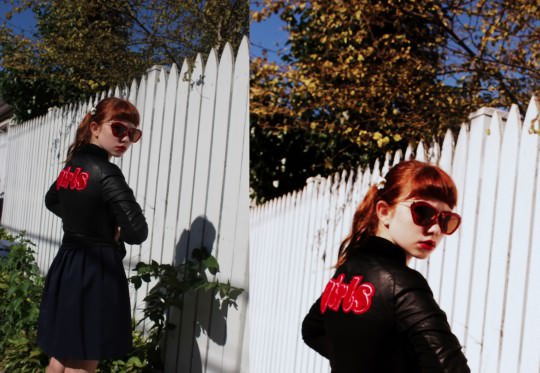 1. Basics
Autofix is your friend. It is the first thing in the sidebar under Basic Edits. Sometimes it screws up and makes everything blue, but most of the time it gets all the shadows right. It’s just a nice way to make sure your photo is in its most basic state before you get started. 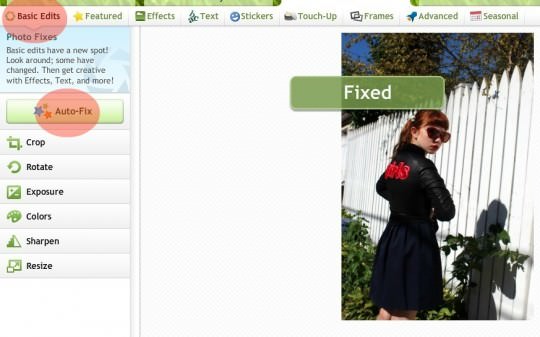 Crop is helpful for composition and whatnot. Autumn de Wilde wrote us a great guest post some time ago that is really helpful for getting into a composition-wary mindset. Lots of other editing programs can crop stuff, but I particularly like how Picnik shades the to-be-cropped area. Straighten, under Rotate, will help you get the composition how you want it, too. 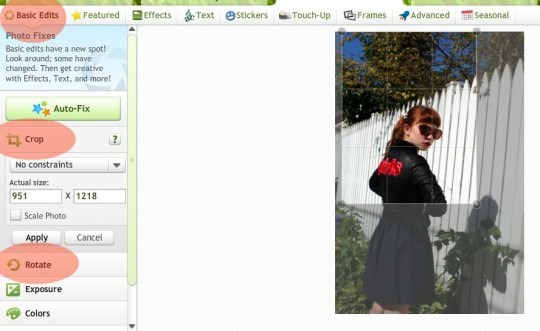 It is with this basic photo as your canvas that I advise the following life-changing tips.

2. “Vintage”
Yes, I realize it is dumb and a little depressing to use a photo-editing site to make something look like it was taken long ago on ye olde film camera. And yes, I’m going to tell you how to do it anyway, because it just looks PRETTY, OK?

I usually go to CinemaScope under Effects first, because it gives a great grainy look. Uncheck “Letterbox my photo,” because Letterbox will give away that you used Picnik and not, I don’t know, photographer fairy dust. 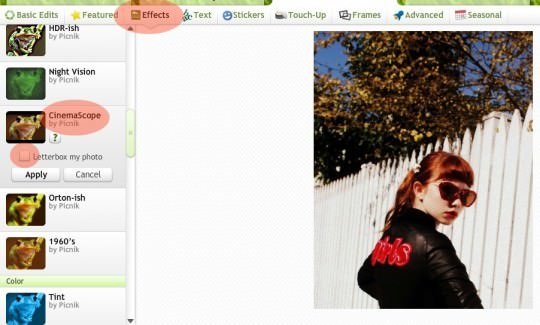 Also distinctly Picnik-y is the coloring of CinemaScope—kinda pinkish/brownish/yellow. Go back to Basic Edits and mess around with Temperature under Colors. The more negative you go, the bluer it will be, so just a little bit should get rid of the fake-vintage-tint coloring. 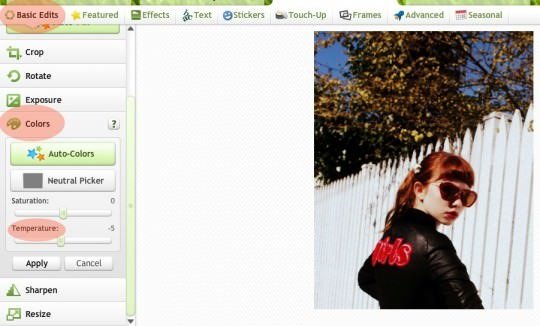 Now you have a photo that’s just good and grainy. (Picnik has an effect that is just film grain, but all it does is add little dots on the photo. Stick with CinemaScope!)

To be honest, I don’t totally remember how exactly I edited this one, but it looks like the next thing I did was to mess around a bit with the stuff under Exposure in Basic Edits. I recommend going back to this tool frequently—there’s no surefire effect you’ll get from messing with the varying notches since it varies for each photo, so just experiment and see what looks good. In general, Contrast should be higher than Exposure. Use sparingly and thoughtfully. 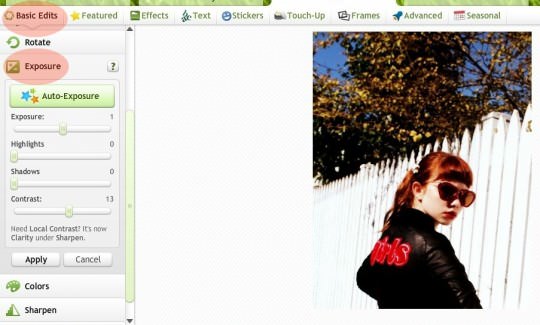 Your eyes will get tired and mushy from staring at the same thing for so long, to the point that you can’t tell what looks good anymore. Lucky for you, Rugrats is on Instant. 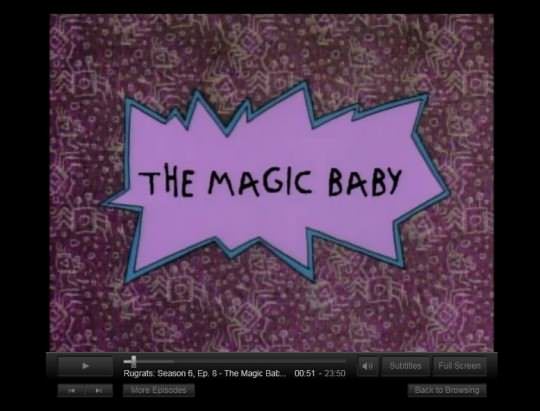 I’m pretty sure my editing ended there. It’s easy to go overboard with so many options, so make sure you know what you’re actually going for. Do you want it to look like a legitimately old photo? Like film? Or a film still? Do you just want to make it look nostalgic and yellowy? (“Yellowy” has got to be the grossest word ever.) Know what you want so you will know when to stop. For all you Type-A personalities out there, that’s a good life lesson in general! You’re welcome.

If you don’t know what you want, just remember to take a step back every once in a while and see if you’re satisfied with what you have so far. That’s a good life lesson for lost souls! God, I should just write a DIY on Being A Human Being. I’m such a frigging genius.

The 1960s effect is nice but can also be the biggest indication of a Picnik-edited photo, which defeats its whole purpose of making a photo look authentic! To avoid that, get rid of the rounded corners. It doesn’t look like the pretty ratted edges of film, it looks like a computer shaved off a corner and made it a perfect circle. 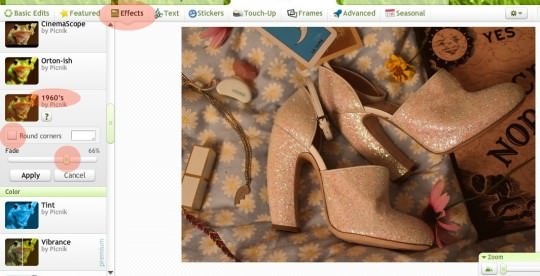 Also, 1960s makes everything white into PINK. Since the Temperature trick from earlier only works on yellows (the Temperature scale goes from blue to yellow), you’ll have to use Highlights under Exposure under Basic Edits to get rid of this one. If that loses the vintage feel you wanted, make it a little positive on Temperature for a yellowy tint, but only a bit, so you don’t get the problem you had with the pink all over again. Or go to Sepia under Effects and mess with the shade and fade. 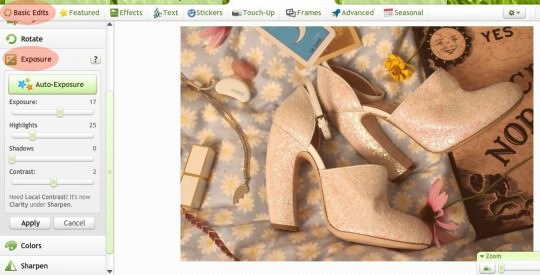 This is what I mean when I say know what effect you want in the end. I wouldn't edit the other photo to make it look like it's from the 1960s, because it has a different vibe to me, and I think the pinkish stuff would look wrong.

Tint and Sepia (both under Effects) should especially not be used without also messing around with Fade, Exposure, Colors, etc., just because all they do is make everything one color. 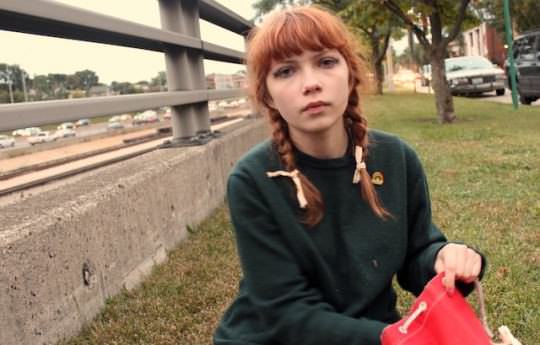 I don't have a screenshot of when I edited this photo, but it was basically what I said above.

Heat Map 2.0 (under Effects) seems ugly at first, but if you mess around with the different styles and fade it a LOT, it can add a really nice vintage photo-lookin’ tint. It is less flat and 2D than the normal Tint effect, which, again, just makes everything the same shade of one color. 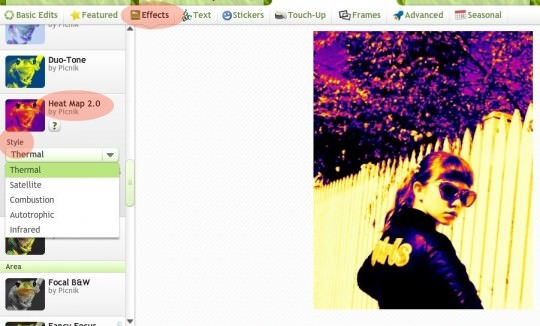 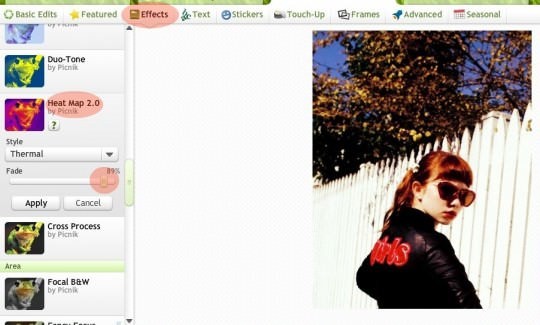 Cross Process makes white look yellow and everything else look blue. I generally avoid it because it so badly wants to look like film and just doesn’t. Sometimes it works, though, but fade! Fade, I say! 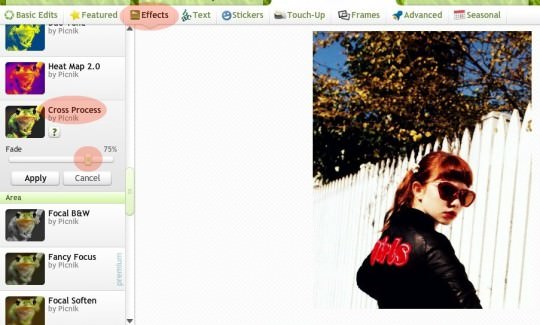 3. Dreamy
Make Exposure higher than Contrast (see step 2 of 1960s editing above). Orton-ish is nice, just be careful that the Bloom doesn’t get too sharp, and Brightness has the potential to mess with your colors, and fade it a lot. Soften, another effect, is a less complicated Orton-ish, without all the shadows and everything. 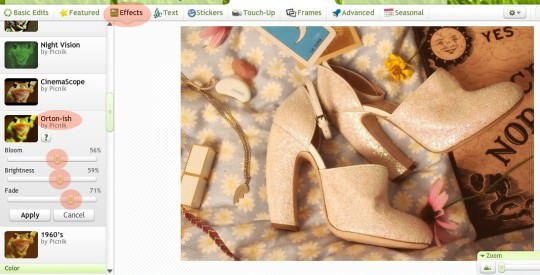 4. Technicolor
Kind of like an old film, I guess. Increase the Saturation under Colors, but no more than maybe 20. Saturation is this weird thing where you can’t tell when you’ve gone overboard since it just gets more and more colorful and your pupils get more and more dilated. But have some self-control, for Pete’s sake. 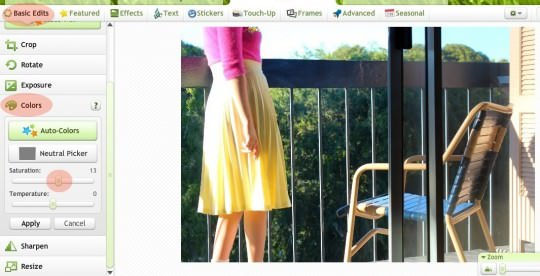 You’re actually gonna use CinemaScope second this time, because it mutes color, and it would’ve been hard to saturate all the shining skies and everything after using CinemaScope first. 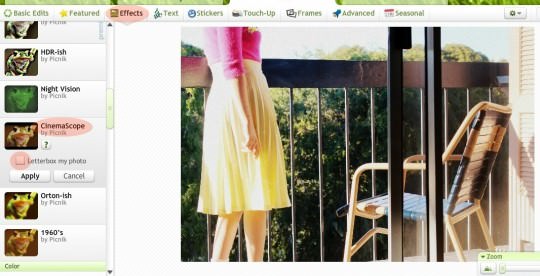 5. Creepy
This is for when you want to look like some kid who was in carnivals in the 1910s or something. You can mess around with Sepia and CinemaScope a lot, or for black and white, Infrared Film will do the trick. It’s maybe the only effect I don’t think should be faded at all, because black-and-white mixed with normal color looks really edited and kind of just ugly. Infrared Film looks weird with a photo with too much texture, though. Be discreet and all. These ideas of mine don’t really guarantee anything, you gotta experiment and use your own taste, too. 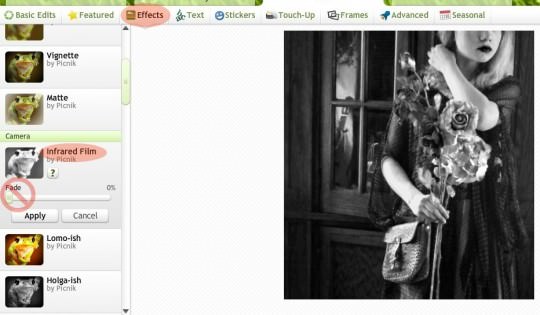 Well, that’s about it! Basically, the only effects that won’t make you look like a tool are the ones I’ve listed here—this coming from someone who has spent years of Saturday nights alone at home editing photos of herself. Um.

Seriously though, keep away from the weird Vignette, Holga-ish, Lomo-ish stuff. The biggest thing to remember is to mess with all the fades and colors and contrast and things to make sure your effect doesn’t look plastered on or easy to recreate. Creating an effect that isn’t easy to recreate is maybe the thing to strive for most. Because yes, it’s a little saddening that people (e.g., me) use a computer program to make photos look like they existed before computers, so don’t try to make digital photos look like film, just invent your own look for them. Make sense? And when you’ve been overthinking it, you can always just watch Rugrats for a bit. ♦