And this is only clothing-wise. 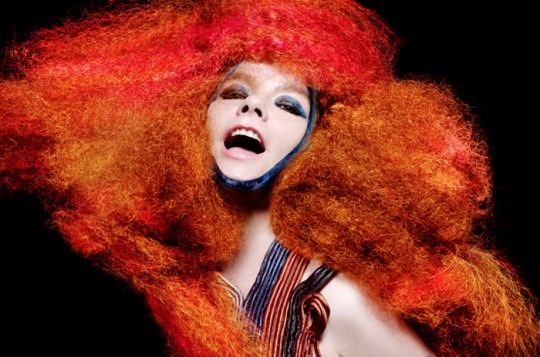 Perhaps it’s because her voice is so otherworldly that Björk is so often portrayed as something other than an adult woman; she is a faerie, a pixie, a sprite, a magic other, a child—never an exacting pop star making pop art. What really she is, however, is more like a superhero. Just when music is getting perfectly boring, she shows up with a new album, and reminds you that you could stand to be living a more imaginative life—or least being more creative with your look. In honor of the enigmatic Icelandic singer’s latest, Biophilia, and the giant orange afro wig that has been engulfing her head of late, here are 10 inspiring moments from her musical past.


1982: Performing with Tappi Tíkarrass. What’s a more subversive onstage look than the classic ’90s kinderwhore babydoll dress? I’ll tell you: literally dressing like a baby doll. Here, a 16-year-old Björk, in her first serious band, takes what set her apart—her femininity and her youth—and exaggerates them for a feminist, fuck-you effect. It’d be like if Lana Del Rey started performing in full-on Toddlers & Tiaras drag.

1985: On TV with her band Kukl. Björk’s being 19 years old and seven months pregnant is not necessarily inspiring on its own. That she is performing with her anarcho-feminist punk band in a half-shirt on national television is.

1988: Björk’s Mr. Wizard Moment on a European Christmas special. When Björk’s band the Sugarcubes becomes famous, she uses a TV interview to explain how television works and the changing nature of her relationship to it. Her nerd mind and her fantasy mind intersect. She needs her own Mr. Wizard-style show about household science where she debunks myths and disembowels small machines. I would get cable just to watch Björk’s Everyday Science. Also: Her au naturel brows are a solid argument against tweezing. Also also: she’s wearing a watch on both wrists.

1989: Video for the Sugarcubes’ “Eat the Menu.” Björk again subverts the high feminine ideal by rocking a figure-skating dress and sparkly tights with a bowl cut, no makeup and some sneaks.

Circa 1992: Björk’s house in Iceland on Cribs. Björk gives a tour of her house and also takes us to her favorite bubbling mud pit. I like that she really knows that she needs to live near water and have a surplus of over-the-top chandeliers.

1993: “Big Time Sensuality” video. I see a lot of girls around doing the campus-casual pajama bottoms, as if their billowing patterned flannelwear might magically pass for actual pants-pants. Here, Björk reminds us that if you are going to do an “outdoor jammies” look, you should step it up: sure, she’s wearing a full-length silk nightgown—but with a mohair half-sweater and a headful of mini-buns.

1996: Bravo Profile on Björk. Björk says in the interview, “If you want to make something happen that hasn’t happened before, you’ve got to allow yourself to make a lot of mistakes. Then the real magic will happen. If you just play it really safe, you won’t get any treats.” This could be your new mantra.

2000: Dancer in the Dark. Björk had been acting in art films since she was a teenager, so it made sense that the controversial director Lars Von Trier would cast her as the lead in his depressing and strange musical. Not exactly a risky career move, these two weirdos working together. The real risk is that she plays someone who suffers, is exploited, and then dies tragically, spending the last minutes of the movie swinging at the end of a noose. Dancer in the Dark was the last thing you wanted or expected from Björk, and she did it anyhow.

2001: The Swan Dress. While every other woman at the Ocars is shellacked with makeup and girdled into breathlessness, Björk shows up with messy hair, a dress that looks like she’s wearing a dead bird draped from her neck, and a pair of strappy cha-cha heels. Oh, and she also lays an egg on the red carpet. The lesson: special occasions call for a memorable dress.

2009: She uses girl bands to back her up. Björk has used all-female choirs pretty consistently, including indigenous singing groups. For her latest performances she’s got a crew of Icelandic women two dozen deep, filling in the oohs and aahs of her heavenly harmonies. Here, in a performance recorded for her Voltaic box set, she’s got an all-lady horn section. If you ever wonder if your French horn can really take you places beyond the band room, consider this: