Girl gangs I have loved and lost.

We’ll Always Be Together 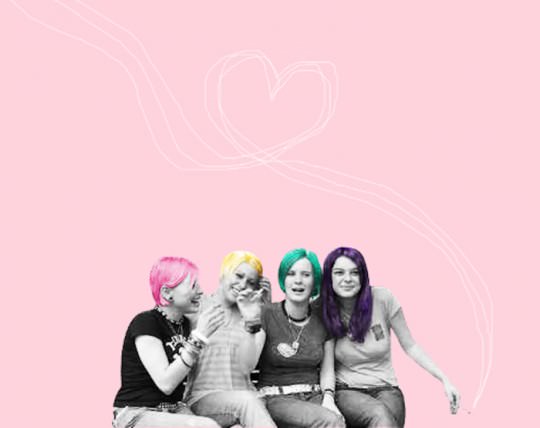 The Fab Four #2: Emily, Becky, Sonja, and me. Illustration by Emma D.

In my experience, groups of teenage girls treat their friendships like bands: you’re not really, truly official until your gang has a cool name. Every time three or more girls fall madly in friend-love, they grasp for some sort of snappy moniker to legitimize their bond. If I had to guess, I’d say that it has a lot to do with wanting something awesome-sounding to write on walls, of both the social media and the graffiti varieties (more on the latter in a minute). Also, who didn’t see Grease 800 times as a child and envy the bad-girl camaraderie of the Pink Ladies? Mostly, though, I think it’s a result of wanting to place ourselves in a new context, one characterized by the qualities we love most in our friends. Girl gangs take on names so we can take on bits of one another’s identities, which can be a really validating and awesome experience. Identifying with an official group can also have its downsides—who among us hasn’t been painfully excommunicated from a ring of friends at some point or another? For better or for worse, I’ve been a part of plenty of girl gangs over the years, some with cooler names (and people) than others:

Much like the aforementioned Pink Ladies, the first girl gang I was a part of was the female answer to a group of tough guys—well, as tough as guys can be in middle school, anyway. Sixth grade was a little too early to be thinking about pregnancy, beauty school, and drag racing, but we had plenty of small-time dramas of our own.

My hometown had separated grade schools into different districts until that year, when we all merged in one building. Our middle school was like a beautiful melting pot of training bras, Lisa Frank school supplies, and mossy retainers. We scrambled to assert our places in this newly expanded social structure. The noisiest of the misbehaved and skateboard-obsessed guys quickly banded together, built a shaky plywood quarter-pipe at the abandoned house across the street from the school, and christened their pack simply the Crew. Since I was also fairly loud and in possession of a skateboard, not to mention in instantaneous love with a good half of them, I wanted in.

Due to the gender segregation common to many if not most younger kids, this was not to be. Lucky for me, though, these guys had a bunch of brassy female friends who would gather around after school, braying flirtatiously in their New Jersey accents at some boy or another as he hit his unhelmeted head on the pavement after a failed trick. These would-be sirens of the skate park called themselves the Sexxi Crew, and although at 11 I didn’t consider myself particularly sexxi, I set my sights on rolling with them. The group’s dynamic was pretty well established before I found my place among their ranks, so I was more of a peripheral member. More central to the structure of the Sexxi Crew were Krysten,* a perpetually confused-looking Wet n Wild devotee who wore a daily uniform of rolled-up Soffe shorts and tight Abercrombie T-shirts; and Marisol, a frowny new girl who had just moved to our suburban neighborhood from Newark. She was the first in our school to have nameplate hoop earrings, a trend that soon caught on like really tacky wildfire. The leader of the pack, though, was Jacki, who had two tiny dogs named Mercedes and Cristal and a serious rhinestone fixation. She could always be counted on for a wild story about drinking Mike’s Hard Lemonade in the abandoned house with one of the members of the Crew. Jacki’s appreciation for the finer things in life, coupled with her oddly premature experience with alcohol and making out, made her the sexxiest among us. She was clearly the best choice for our leader.

Jacki forever cemented her bad-girl cred one day during our after-school ritual of getting gross brownie-flavored Frappuccinos and trying on discount-store lace thongs over our jeans at a nearby strip mall. The combination of caffeine and flimsy underwear made us feel sooo grown-up, which may have given Jacki the courage to take our misguided attempts at maturity to the next level. As Krysten, Marisol, and I looked on in awe, she whipped out two cans of pink and black spray paint and, in delicately looping cursive, graffitied “~Sexxi Crew~” on the back wall outside the T.J. Maxx. I have no idea where she got the paint, since we weren’t even teenagers yet, but it was another testament to her position as the untouchable queen of the tough girls. Unfortunately for her, though, this title came with a police investigation, which was quickly launched to find out who could possibly be behind this utterly criminal defacement of a respected community discount institution. In the minds of our small-town authorities, some pink paint in an alley was a more serious issue than the adolescent drinking and splintery plywood-inflicted lacerations that our stomping grounds provided just steps away from our school. After some hard-hitting detective work on their part, Jacki was arrested. I was barely a part of the Sexxi Crew in the first place, having only just perfected my intonation of the phrase “OH MY GAAAH!” when witnessing a skateboard-based mishap, so I promptly set out to find a different group of middle-school girls, perhaps the kind who decided to crack their books instead of their gum, but definitely ones who didn’t come with police involvement. Despite this disavowal of the Sexxi Crew, my crushes on their modern-day-T-Bird counterparts persisted until long after I became OK with my friends getting hassled by the cops.

I’m fairly certain that most of the girls that I know, at one point in their lives, have been in a crew called this. Or the Fab Five. My original Fab Four formed in the seventh grade, its core members being Maria, who was sharply sardonic and bore the power of being widely accepted as the second-hottest girl in school; Beth, who was a hysterical and kind girl from an enormously wealthy family; and me. We three loooooooved one another in the obsessive, around-the-clock way that only girls of that age are capable of. We never separated, except to go to class, and even then we stayed invested in the group’s welfare by spending writing heartfelt notes to one another, which we always signed off with “BFF4L” or some similarly devoted acronym. Maria and Beth defended me from the scorn of the other 12-year-olds when I messily home-dyed my hair purple, accidentally turning the skin on my entire body the same color in the process, and cried with me on the phone when my alcoholic mom threatened to move our family to the South for the thousandth time. (She’s been sober for a few years now.) I could go to them for just about anything.

Maria was always up for a magazine-quiz-heavy hang session and taught me how to flat-iron my hair and apply eyeliner to my waterline, the two key elements to her success with our grade’s boys. While Maria was creatively invested in her appearance, Beth was more into applying her artistic energy to do-it-yourself projects with me. Beth and I created name-based sub-sects of the Fab Four, like when we learned guitar together and formed a band called Boo Boo Bazooka. We also founded a very self-aware poetry group called Confessions of a Tortured Teenage Soul, or COATTS for short. COATTS had its own website (not this one), on which we posted oh-so-dark verse about hating our parents and being misunderstood, with plenty of edgy imagery of blood, spiders, and the color black (the deepest color, doy).

I know that you’re thinking that I must be terrible at math, as I’ve only accounted for three members. While you’re definitely right about my math skills, the other girls in the Fab Four were pretty forgettable and not as essential as the original trio. They were added and subtracted (see? I got this) in what we called “tribal councils,” which was our weird euphemism for AOL chatrooms. In them, we’d brutally break the news to one girl that she was OUT in the most impersonal format possible. Beth, in an uncharacteristic diversion from her normal sweetness that probably should have been a warning sign, was the main organizer of these. Maria and I were certainly just as horrible for taking part in them, though, adding digs about how the girl in question was “fake,” which everyone knows is the utmost in adolescent insults. After removing whoever it was that week, we’d ceremoniously usher in another member to our ranks by letting her know that we LYLAS, or love you like a sister. The departed girl would then be ignored in the hallways, while the new one would join us for weekend sleepovers until the process began again. I’m half-convinced now that these peripheral members were brought aboard solely so we could justify our gang name, which, in retrospect, isn’t such a great reason to terrorize someone online.

The internet is such a powerful vehicle for preteen hurt, which I’m sure is even truer today than it was then. When we weren’t using it to break the hearts (</3) of our ex-members, it served as an essential tool to the Fab Four’s friendship. We were too young for cell phones, but we needed some way to be in constant communication without our parents bitching at us. One day, I was IMing Beth, who, like me, had a screen name based on the writerly pseudonyms we had affected as members of COATTS. Mine was, for whatever reason, liegeliberty24. I didn’t realize until years later that this made me sound less like an eloquent wordsmith and more like a great lover of LARP and Renaissance Faires. I think Beth actually came up with it for me, so the blame for that weirdness lies with her, as well as for what happened as a result of our online chat that day. She said that she was at a family party at her house and that it totally blew except for the presence of her cool 15-year-old cousin, Benji. She decided that he would like me since we had similar taste in music, so she gave him my screen name. I immediately got an IM from BenjiGCGDAFSC, the initials of which, he explained, stood for Good Charlotte, Green Day, Anti-Flag, and Something Corporate, my favorite bands at the time (I KNOW—remember that I was 12, though). I invited him to a punk show I was going to that night at my favorite local venue. He replied that while he loved that place, he couldn’t make it, but his band, the Impassioned, played there all the time and I should come see them sometime. Predictably, the fact that he was a musician, not to mention the romantic-sounding name of his band, sealed the deal in my becoming totally crushed out. At the time, Beth also had an online boyfriend whom she had never met, so she encouraged the flirtation wholeheartedly and helped me see it as a totally normal way to connect with somebody.