Everything Is Bagel Bites and Nothing Hurts 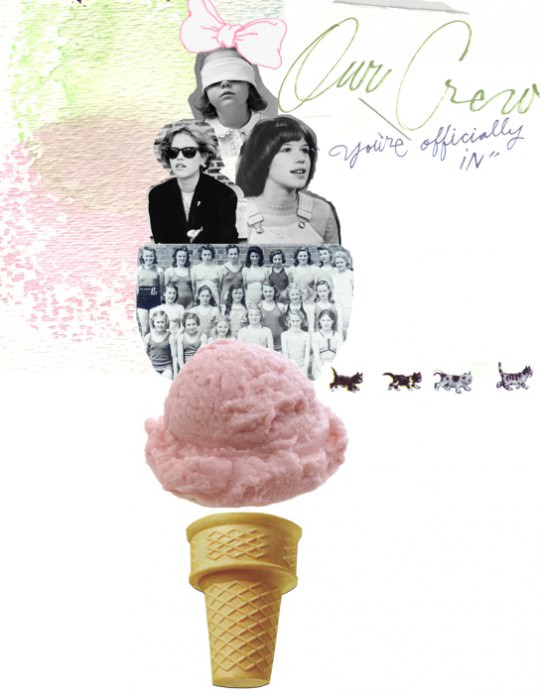 When I was 15, I was blindfolded, spun around three times, and forced to eat a sardine smothered with hot Louisiana sauce. I still have no idea what “hot Louisiana sauce” actually comprises, but I do know that sardines gross me out, and I would never have eaten one were I not under strict orders from the captains of the PHS girls’ varsity swim team.

My friend Megan and I were the only freshman at the team’s first sleepover, and we’d heard rumors of initiation rituals, some that had most certainly been hyped up by the urban-legend cycle (“I heard they made one girl skinny dip in Mirror Lake, but like, these fish were doing it right near where she was swimming, right? Nine months later, she gave birth to seven goldfish. True story”), and some told to us directly by the team’s sophomores, who claimed their initiation was “no big deal,” and that we shouldn’t freak out about it. And so it was that Megan and I went to the sleepover with our fear meters resting somewhere between UNPLANNED FISH BABIES and NO BIG DEAL.

After a few hours of stalling and silently praying our teammates would forget, we were dragged out into the team captain’s backyard, blindfolded, and given spoonfuls of gross: sardines for me, cat food for Megan. “Congratulations,” the captain said, beaming, as I spit half-chewed sardine into the grass, “you’re officially in.”

I guess I was supposed to feel pretty great at that point: relieved, accepted, and even loved. But I felt like a pile of crap in more ways than one, and even though I was “in,” all I wanted to do was throw up and go home.

A few months later, after swim season had ended, I was invited to a sleepover with three girls from my class. I had entered high school as a bit of a floater—my best friend had moved away, and the crew I’d run with since elementary school had splintered a bit because of class schedules and the general nature of growing up. I didn’t really have a steady unit of friends that I belonged to.

These three girls, on the other hand, had been fairly tight for years, and had recently started inviting me along on Friday and Saturday nights, which I was incredibly excited about, as I liked all three of them very much and probably would have even eaten a sardine to prove it, though these were the types of girls who never, ever would have asked such a thing.

After a few months, we became a fairly inseparable foursome, though in the back of my mind, I always worried that I wasn’t quite in yet, that the three of them might decide that they didn’t want to break the bond they had between them, and that I’d go back to floating around, trying to find someone to eat Bagel Bites and watch Molly Ringwald movies with.

Right around my 15th birthday, I was invited to a sleepover at my friend Diana’s house. I figured it would be the standard sleepover—we’d watch an ’80s movie, eat Totino’s pizza rolls, and talk about all of the boys we wanted to make out with, even though none of us had actually kissed anyone yet. But when I arrived at her house, her mother just smiled and sent me downstairs, where my three friends were waiting with a giant chocolate chip cookie that had “Happy Birthday” written on it. They all began to sing, and I felt what I think my swim captain had intended me to feel after shoving sardines in my mouth—like I belonged there, like I was “officially in.” That night, I realized that I had a crew, and it was really the best birthday present I could have asked for. (I also realized that night that it is not a good idea to eat approximately 7000 metric tons of Bagel Bites and then dance on top of a couch. Just a tip from me to you.)

Loyalty should be a simple thing—I love you, you love me, let’s watch out for each other. But the idea can be complicated by outside factors: time, age, people who don’t quite understand how to demonstrate it. When you’re very young, you prove yourself to your friends by sharing with them, by letting them play with your toys or read your books or come over to your house to meet your dog or see your room. You want them to like the things that you like, to see your toys and your dog and your room as a reflection not really of your character but of themselves—you want to be brain twins, an unbreakable team, a never-ending chorus of excited “me too!”s. A simple “that’s stupid” or “ew, nobody likes that anymore” from an elementary school best friend can be a totally confusing heartbreaker, because it implies that you’re growing apart, and signifies that friendship is going to become slightly more complicated than “we both love X, therefore we love each other.”

As you get older, you find different ways of proving your loyalty to the people you care about. You may come across a group of friends that you love so deeply that you go all out to show the world that you’re devoted: matching bracelets, secret languages, 80 million pictures in your dumb signature pose, holding hands in the hallway, a proper crew name , a Tumblr composed entirely of inside jokes, a willingness to raise one another’s fish babies, whatever. Yet after a while you begin to realize that you don’t need any of those things—the fact that you’re inseparable is proof enough; you have each other and that’s what counts.

Of course, this doesn’t mean your crew will always stay together. There will be challenges and differences. There will be disagreements and breakups. There will be a panicked scramble to figure out where the hell you fit in, and that may happen more than once.

You may meet certain people in your life who thrive on the panicked scrambling, who look for scared and lonely people to jump on. These are typically the people who will make you “prove” your worth by selling yourself out, treating other people like shit, or doing something stupid and dangerous that you don’t really want to do. They’ll promise you their devotion, popularity, whatever—but what they want is your willingness to do what they say, and the right to be cruel to you if you don’t. People who want you to suffer in order to prove how much you want to be near them aren’t looking for friends as much as they’re looking for followers.

It’s not entirely surprising that people submit themselves to humiliation or sadness in order to find some type of belonging; the heart is a dumb and fragile thing, and most people are just trying to keep theirs together as best they can. We go through all of these ridiculous friendship rituals because we want to know if it is OK to open up, if we’re in safe territory, and sometimes we’ll go through hoops (and spoonfuls of cat food) in order to get the answer. But the best kinds of initiation rituals aren’t the ones that are based on humiliation, fear, and intimidation, but the smaller, quieter ones, based on love, ridiculousness, and a shared sense of excitement. With real friends, you don’t need anyone to tell you that you’re “officially in.” You just know that you’re in, and you’re in it together. ♦