We’ll Always Be Together

Girl gangs in movies usually comprise a fierce set of characters with badass attitudes spitting out memorable one-liners. Not only do they have eternally cool nicknames, but they also possess some of the best style seen on the silver screen. Let’s take a look at (and steal) some looks from our favorite cinematic girl gangs! Remember, it’s best to mimic only these things about them and not their law-bending ways…I don’t have enough bail money for y’all. 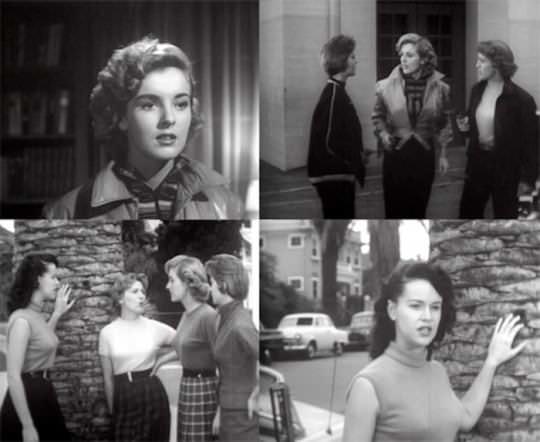 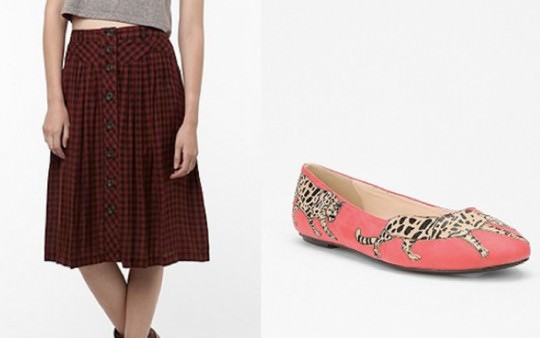 The Violent Years (1956) is an old Ed Wood film about a poor little rich girl named Paula who rebels against her parents and leads her friends down a path of juvenile delinquency. Her gang’s daytime style staples include perfectly coiffed hair and snug sweaters, but once the sun goes down, they throw on leather jackets and accessorize with pistols to rob gas stations, vandalize classrooms, and assault young men. Let’s pay homage to these troublemakers by dressing more like their innocent alter egos. I like their long plaid skirts (may I call that a MAXI-PLAID?) and this one from Urban Outfitters would work pretty well. You would also need a good pair of flats, just in case you have to make a run for it. These leopard-appliqué flats, also from Urban, will be perfect for late-night chases. 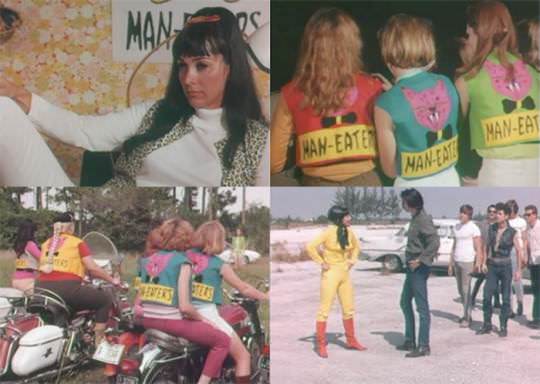 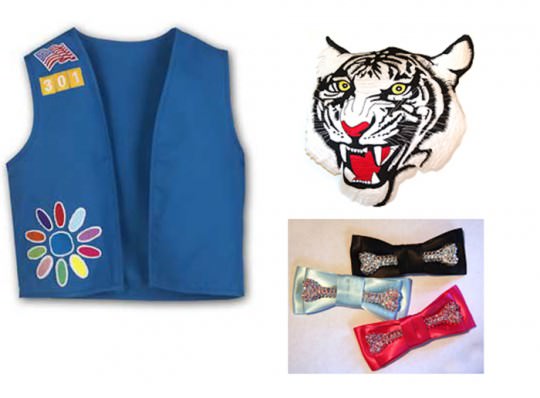 She-Devils on Wheels (1968) is about the Man-Eaters, a biker gang who get their kicks by racing one another for first dibs on a herd of hunks each night. Man, how I LOVE this movie. They “ain’t no daisy-pulling broads,” as their leader Queen retorts, they’re brutal bitches in bubblegum vests! Now, let’s make our own! If you were in Girl Scouts as a kid, find one of your old patch vests and copy the pattern in different colors for each of your friends. Then think of your own girl-gang name (my all-bangs gang is called the Fringed Femmes) and plan a patch-making craft night using felt or iron-on letters. You can also buy an already-made patch with a menacing animal face on it. Top the whole look off with a matching accessory all your girls can wear, like these bone bows from Cutie Dynamite. Fun fact: The Man-Eaters’ theme song, “Get Off the Road,” was covered by both the Cramps and Josie Cotton. 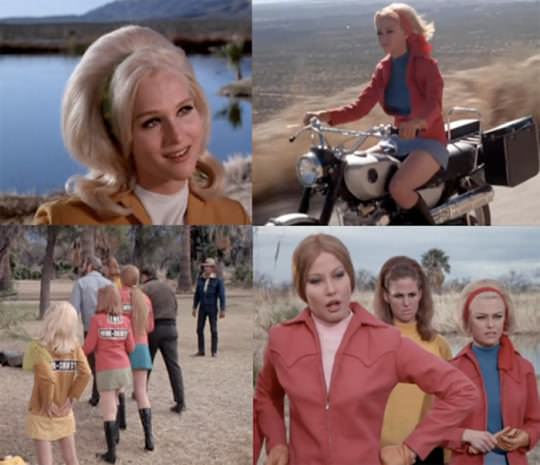 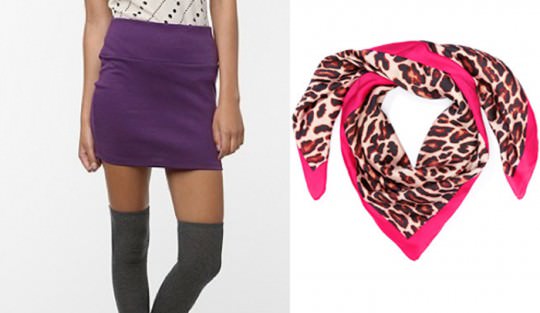 The Mini-Skirt Mob (1968) is another gang of motorcycle babes, whose leader seeks revenge on her ex-boyfriend and his new fiancée. It’s like a Lifetime Original Movie on wheels! Naturally, the girls wear miniskirts, in every color of the rainbow, along with matching jackets bearing their gang name like the Man-Eaters do. To burn rubber like these devilish dolls, get a colorful mini, like this Sparkle & Fade one from UO. Then find a vintage scarf at the flea market or buy this pink-and-leopard one from Monsoon and tie it around your neck or in your hair. I love the Mini-Skirts’ makeup too: lots of lashes, black eyeliner, and a nude lip. To get their look, try Urban Decay’s Big Fatty Mascara, Bobbi Brown’s Long-Wear Gel Eyeliner, and M.A.C.’s Cremesheen Lip Glass in Over Indulgence. 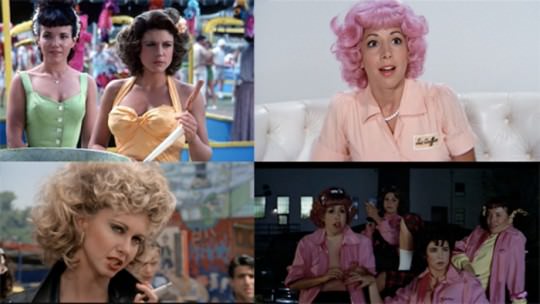 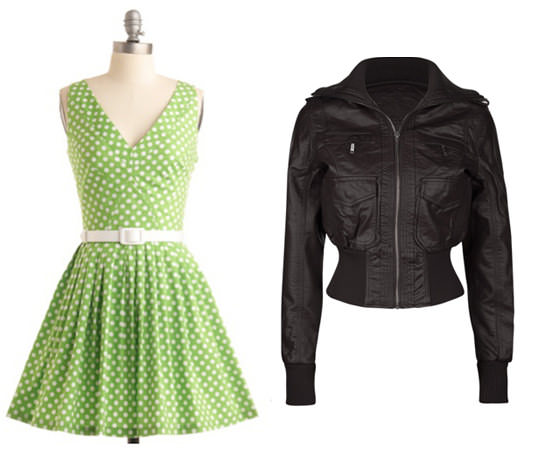 Grease (1978) stars a girl gang many of us are familiar with: the Pink Ladies. Cat-eye glasses, neck scarves, pastel polka-dots, leather jackets, Frenchy’s pink hair, and Sandy’s shiny black pants are all things that any girl would want in her wardrobe. I’ve always loved the light green dress that Jan wore in the carnival scene, and this Lime Fizz Dress from Modcloth would be a great tribute. Throw a fitted moto jacket on top like this one from Tilly’s and you’ll instantly nail that good-girl/bad-girl balance, just like Sandy. 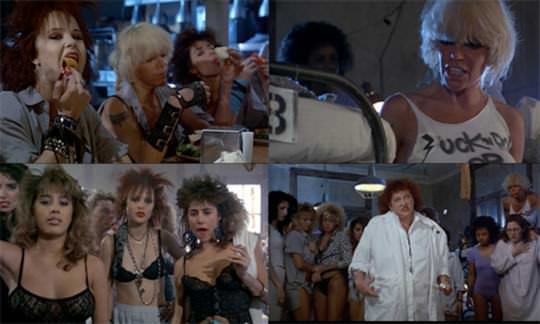 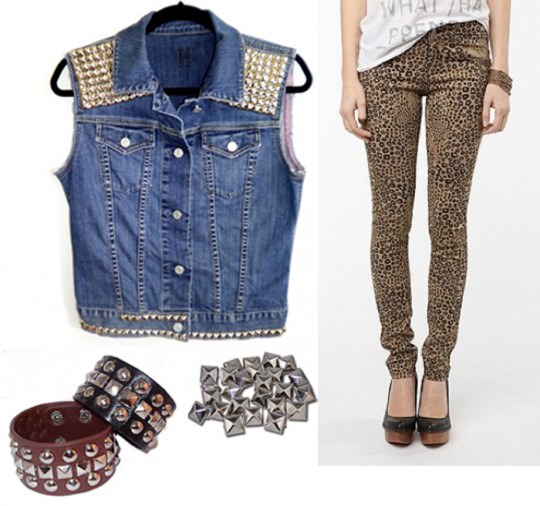 Reform School Girls (1986) takes place right in the clink, with the “Queen of Punk,” Wendy O. Williams, as the meanest cell mate. There are endless amounts of lace lingerie, stacked punk bracelets, Sharpie-decorated tank tops, and leopard print, but you can interpret their look by studding EVERYTHING! Make a denim vest like this one on Etsy by thrifting a denim jacket and buying studs from Studs and Spikes. I’d pair it with some leopard pants like these ones from Tripp NYC. Tease your hair like your life depends on it and spray it with Bumble and Bumble’s Does It All. Collect a few studded bracelets to stack on your arms like these inexpensive ones from Angry Young and Poor. Related side note: When I was a teen I worked at a pizza parlor, and one day I wore a spiked bracelet while making a pizza. As slapstick likes to ensue constantly in my life, one of the spikes fell into the dough! The customer found it and it was safely returned to my wrist. Luckily I didn’t get fired! Today’s life lesson: remove your spikes before making pizza. 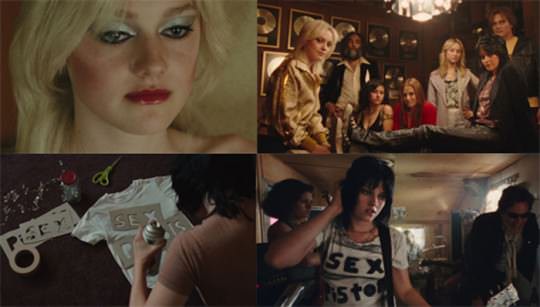 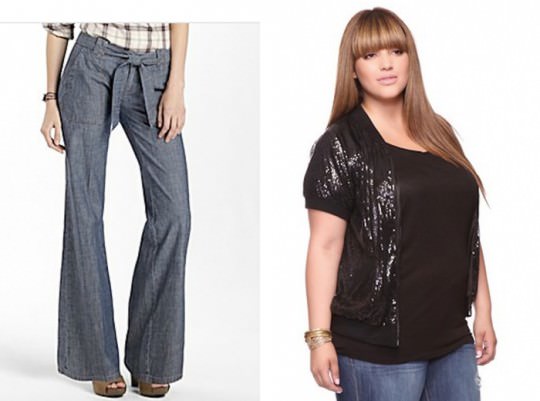 The Runaways (2010) are not a criminalistic girl gang like some of these other ladies, but they were a group of tough chicks who banded together in the name of rock and roll. Since this was in the ’70s, we see a lot of disco glitter and bellbottoms. We also watch Joan Jett (played by Kristen Stewart) DIY her own Sex Pistols shirt! Make your own punk band shirt with stencils, safety pins, and spray paint. I love these bellbottoms from I Heart Ronson for JCPenney and anything sequinned would be perfect for a Runaways-inspired outfit. This sparkly short-sleeved jacket is pretty cute, but you should wear even more sparkle on your eyes! Dakota Fanning has the best makeup in this movie. Try out her look by lining your eyes with Milani’s LIQUIF EYE pencil, then applying shimmery shadows from Urban Decay’s Book of Shadows (particularly Gunmetal and Gravity) and Revlon’s Diamond Lust in Celestial Silver. Finally, paint your nails with Milani’s One Coat Glitter and prettify your punk-rock pout with Urban Decay’s Stardust Lip Gloss. Now grab your leather jacket, tease your hair, sharpen your lipstick knife and round up your girl gang…you’re ready to show the world who’s boss! ♦