About a Girl: An Interview With Blake Nelson

The author talks to us about Dream School, the sequel to his much-loved novel Girl.

How to Do a Pompadour 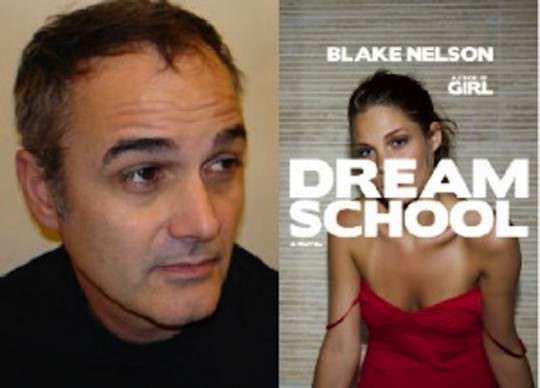 Blake Nelson has written 12 books, but his most beloved (by us at least) is probably his first, 1994’s Girl, which was written from the point of view of a suburban high school student named Andrea Marr and chronicles her discovering the mid-’90s music scene in Seattle, falling in love for the first time, and growing up a little. Dream School, the sequel to Girl, comes out next month and takes Andrea to college on the East Coast.

I emailed Blake some questions, which he was wonderful enough to answer. Naturally, I couldn’t stop asking him about Andrea.

For a certain subset of readers, the story of Girl’s publication, first as excerpts in Sassy magazine, is the stuff of ’90s alt legend, but for those of us who were in single digits at the time (or not yet born), can you explain how that came about, preferably using early- to mid-’90s slang?

Girl was my first novel. When I finished it, I sent it to publishers and they were like: “We don’t understand this.” The rejections came pouring in. So then I tried sending it to Sassy. Of course, they understood it and published several chapters. Meanwhile, there was one book editor who was still considering Girl. But she couldn’t decide. She kept saying: “But who’s the audience? Who’s going to buy it?” So then Christina Kelly at Sassy called and said: “We’re getting all these letters from readers who like your novel.” So I ran up to the Sassy offices and got this stack of handwritten letters from 13-year-old girls in places like Oklahoma City, and I ran across town to that book editor’s office and put them on her desk and said: “Here is the audience! These are the people who will buy it!” And that’s how it came to be published.

When did you decide you wanted to write a sequel? Did you ever worry about messing with the sanctity of the original story?

I wasn’t worried. I thought, if the sequel sucks, I’ll just throw it away.

It was about six years after Girl when I wrote Dream School. Since she was now in college, Andrea had to be more mature, less chatty than she was in Girl, but I still thought she was interesting, and it was still fun to follow her around and see what she did. Also, describing college was fun. I was really pleased with that. Dream School shows what college is like for smart people. It’s so lame how people portray college as just sororities and guys with beer cans strapped to their heads. College can actually be really great.

Who is an ideal reader for the stories of Andrea, as in what age, gender, and sensibility? I gave my little sister (who is very different from me in a lot of ways) Girl as a high school graduation present, but I’ve been too nervous to ask her what she thought of it, or even if she read it…

Yeah, it’s hard to know who’s gonna like what. I told one group of high-schoolers the other day: “If you think Keds are cool and Uggs are not, you will like Girl.”

You and Andrea share a lot of biographical details (hometown, college, profession). Is she you? If so, why not just make her a dude?

I did write about boys around that same time. But the ’90s was a very girl-oriented time. People really wanted to know what was up with them. “What do teenage girls think about?” That was the question that was in the air. “Why are girls so cool?” “Have girls ever been as cool as they are right now?” It didn’t seem like they had. A lot of that was the flowering of feminism, and just the way things worked out. Generation X got screwed in a lot of ways, but we had amazing girl culture. Kathleen Hanna, Sassy, all the great zines… I was just exploring the same things as everyone else.

How did you inhabit the head of a young woman for the first time and how did you get back into that mindset to write Dream School?

I just tried it. That’s what you do as a writer, or any kind of artist. You try things. With Girl that female voice just instantly worked. It was so fun to get Andrea talking. She had so much energy, her sentences would loop around and reconnect to things, or end in these funny non sequiturs, or just trail off into total confusion. Her voice felt exactly right. It was thrilling.

If I were hoping to get my brain to a place like that I would be way into the blogs of teenagers on websites like LiveJournal and Tumblr. Girl and Dream School have a real diary quality to them that might remind people reading them today of what they see their peers do daily on the internet. Do you ever find yourself going down the teen-blog rabbit hole?

I love to read teen blogs. I go on scouting missions to Lookbook and from there find interesting blogs that I check back in with. Tumblr is great, but it’s so visual, there’s not as much writing, but that’s OK. I love how certain blogs just set a mood. Young people are so inventive and interesting, especially if they are left to their own devices.

When did you start writing?

I was a musician in my teens and early 20s, and most of my energy went into that. I wrote a lot of songs, which was good training for writing fiction. I learned how to keep trying even if your first attempts are terrible! I didn’t start writing seriously until after my band days, which was my mid-20s.

What did you read as a teenager?

I read stuff like Jaws or The Doonesbury Chronicles. Just whatever I happened to pick up. Then when I was in bands, I had a lot of free time. That’s what happens when you’re a musician, you sit around a lot. And people started turning me on to better stuff: Kerouac and Henry Miller and Tom Wolfe.

Now a lot of your work, including Girl, Dream School, and your other new book, Recovery Road, about addiction and rehab, can be found in the Young Adult section of a bookstore, but I’ve read that you didn’t necessarily begin with those intentions.

It’s true. I didn’t intend to be a Young Adult writer. And a lot of my books fall into a middle ground, of not totally YA and not totally not.

But that’s OK. The books find their way. Recovery Road, which I worried was going to be too extreme for the YA crowd, has been embraced. And rightly so, because it’s the best kind of YA book, not preachy, not message-y, but still a solid story that’s honest and real.

It seems like most YA fiction these days, especially the commercially successful stuff, is set in paranormal worlds (vampires, werewolves, and wizards), whereas your stuff is often grounded in the mundanity of everyday life. What do you think of the current landscape of books for people in their teens? Do you keep up with the Twilights and Hunger Games of the world?

The problem for me with the wizards and stuff is it’s all so nerdy. I like stuff that is more trying to be cool. Even if it fails, I’d rather experience the effort. And by cool, I don’t mean smoking a cigarette on a street corner. I mean, something that’s good, and has style and integrity, and will last, and is addressed to other good stuff from the past.

Like Ryan Gosling. I suspect he might be a total dork. But he’s trying to be cool. And that tension makes him fun to watch in his movies. You root for him and you feel like you might learn something.

When did you realize that you were good at writing for teenagers?

When Girl came out I got a lot of mail from teenagers. I guess I thought the audience would be a little older. But the letters were great. I was so impressed by them. I hadn’t planned to write YA books, but after that it made sense to. And plus, I like teenagers. I like thinking about that time in my own life.

One thing about me: I didn’t hate high school like some people. I was an odd kid and suffered the usual miseries, but I never got too worried about it. I’d get a big zit and I’d see it in the mirror and I’d laugh. I’d be like: “I’m a teenager! I got a zit!” I would do things like kiss girls’ hands when I was introduced to them. I seemed to be living in several different centuries at once. I was weird. But I enjoyed my youth.

What are some of your favorite television shows and movies (past and present) with teenage female leads?

My all-time favorite teen movie: Splendor in the Grass. The greatest! Of more current things, I love Taylor Momsen, mostly because she was so amazing in the movie of my book Paranoid Park. And also Gossip Girl. And I just watched Twin Peaks for the first time, since Tavi kept posting about it. That was great. I especially liked the promiscuous dark-haired girl, with the lipstick, I forget her name. [It’s Audrey. —Ed.] As a writer, those kind of characters are the best. They present the most dramatic possibilities.

Are there any parts of Girl or Dream School that women have taken issue with? For instance, Andrea’s first orgasm, or other parts you biologically or emotionally could not have experienced? Did you do research or reporting for stuff like that?

No research, I just made it up. And I got a lot of it wrong, I realized as I got older. But one thing I’ve noticed is that people are insecure about sex, so if a female character says: “Whenever I kiss a boy, my ears tingle,” the female reader thinks: “Oh no! Why don’t my ears tingle?” instead of thinking: “That doesn’t really happen! This is a guy writing this, not a girl!” Also, I think in some cases, if you have a good story going, people will go with it. It’s like when you hit a wrong note as a musician. If you’re really tearing it up, nobody cares if you make a mistake.

Surprisingly though, I still meet people who have never seen my picture and think that “Blake Nelson” is a girl. That’s weird. ♦

Dream School comes out on December 6.