How to deal with secrets—your own and everyone else’s. 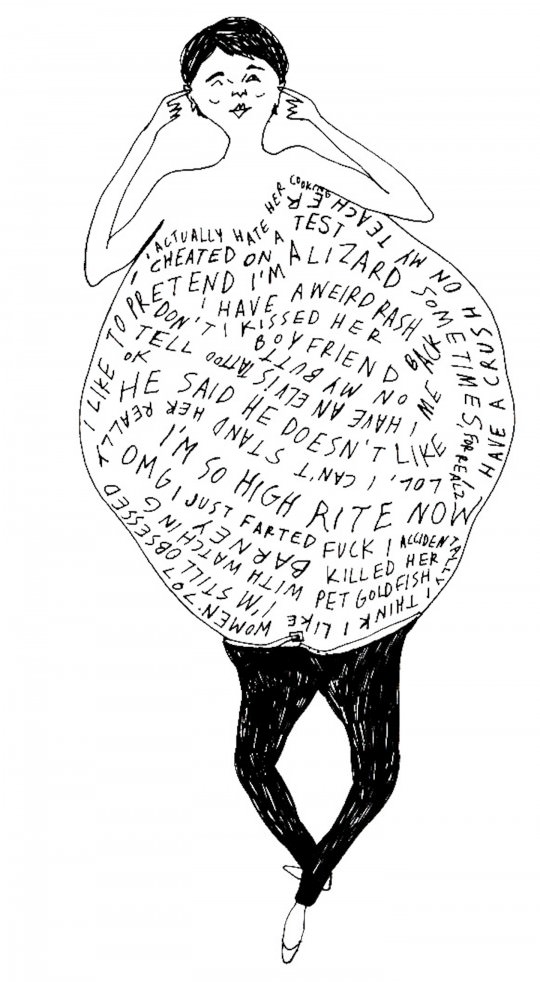 Secrets are tricky little things. The whole point of keeping a secret is so certain people don’t find out about it. “DUH, we knew that, Hazel,” I can hear you all saying (or possibly screaming) to your computer screens. But once in a while you might tell a friend a secret or she might tell you one of hers. Depending on how big the secret is (e.g., “I’m actually an extra-terrestrial, lolz”), keeping it could be an overwhelming task. Although keeping a secret seems like a simple thing to do, it has proven to be very difficult for some young ladies I have encountered. In fact, when someone tells me, “Can I tell you a secret?” it is often not their secret, but someone else’s.

To keep a secret and deal with others’ secrets please, oh pretty please, consult these pointers.

1. Just because it’s not a serious secret doesn’t mean it should be repeated!

If your friend says “I have a crush on Kevin” or “I want to punch my computer essentials teacher,” it’s not that big a deal, because everyone has a crush on someone and punching computer teachers is just a universal desire. But that doesn’t mean you should tell anyone that your friend said those things! Maybe your friend’s computer essentials teacher is an asshole, and if she gets wind of your friend’s feelings she’ll give her a bad grade. Maybe when Kevin finds out your friend has a crush on him, it will make things awkward between them and ruin a friendship. Sometimes your friend might say something to you without labeling it a secret, and then assume that it won’t be passed on. Check yourself before you wreck (i.e., embarrass) someone else. No matter how silly a piece of information may seem, you never know what somebody might want to keep confidential. Be careful or you might lose a friend by accidentally spreading information that you thought wasn’t a big deal but was, in fact, a huge deal to them!

2. Nobody is obligated to share a secret, not even with their best friend.

If someone does not tell you something, it does not mean they are keeping a secret from you. When Kitty Kelly came out with her book Oprah, a “shocking” biography, she kept saying she was going to unleash Oprah’s “world of secrets.” How do we know Oprah was keeping those things secret? Maybe she just didn’t talk about them in public. There’s a difference between private and secret. Just like Oprah, your friends are not obligated to tell you everything about their lives. And they’re allowed to have secrets, too! When a friend keeps a secret from you, you might feel left out, or as though your friend doesn’t trust you. But even your best friend doesn’t have to tell you all of her secrets, or any of them, and vice versa! (That is, unless you have some weird twinsies pact that requires the disclosure of all hidden information from both parties.) And if you want to keep something to yourself don’t let anybody, even if they are your friends, force you to change your mind. Your friends just have to deal! Don’t forget that you too are just like Oprah: a strong female role model who can make her own decisions! Now, where is my free car? Haha! No but seriously, give me a free car.

3. If keeping a secret means putting someone in danger, that secret isn’t worth keeping.

If your friend tells you that they’re being abused or have hurt someone else, you need to tell someone. Tell your parents (if you trust them) or tell your teachers, the police, etc. This might seem like an obvious thing to do, but not everyone is courageous enough to help a friend this way when they really need it. Some people might be afraid of seeming like a tattletale or, even worse, losing that friend. I don’t care how many times your friend tells you not to tell anyone about her abusive relationship: you need to tell someone. I know this is dark, but you never know what could happen. If your friend were to get hurt, or even killed, could you live with the guilt of keeping that secret? Some things just aren’t supposed to be secrets.

Have you ever had somebody say to you, “Can I tell you a secret?” and you say yes and then they respond with, “Well Becky blah blah blah but oh my gawd don’t tell anyone! Don’t tell her I told you!” Seriously? You’re revealing someone’s secret that they obviously don’t want anyone else knowing, but then ordering me not to do the exact thing that you just did? Listen, if you encounter someone who is doing this to you, don’t just sit there and listen. Shut that person down! Tell them that what they’re doing is wrong and make it very, very clear. Like this: “Whatever you’re about to tell me seems like it’s something that Becky doesn’t want me to know, so I’m gonna stop you right here.” Telling other people’s secrets makes you look desperate for attention. Secrets hold a lot of power, but revealing someone else’s to the public does not make you look powerful. It just makes you look desperate, mean, and sad.

Being aware of other people’s privacy is an obligation. Many people do not realize how easily a secret can spread. A friend of mine once hooked up with a boy but wanted to keep it a secret. She shared this secret with only a couple of her friends but it somehow got out. Then people were openly talking to her about the hookup as if it wasn’t a big deal, because those people didn’t know it was a secret to begin with. A private matter turned into a casual, public conversation extremely quickly and it really hurt my friend.

It’s important to respect other people’s secrets and to take them seriously—you can’t control information once it’s out, and you never know what tidbit might end up hurting someone. Like the fact that Tavi was actually never potty-trained and she has to wear Depends to school! I know, it’s totally weird. I wonder if they’re like Meadham Kirchhoff-designed Depends. But don’t tell anyone I told you. I’m like 99.9% sure that was supposed to be a secret. Ugh, I hope Tavi doesn’t read this… ♦