Some kids’ stuff is just tooooo scary for kids.

Childhood is generally thought of as a happy period of one’s life. Most children have few responsibilities and can frolic in the flowers and watch cartoons as much as they please. Books, TV shows, and movies geared toward children are typically light and funny, just what kids love!

But there were some things I watched and read that, looking back on it, were sort of creepy and even downright terrifying. When I remember these shows and books, I’m like, “So that’s why I could never sleep at night!”

Here’s a list of the reading and viewing material that kept me up when I was wee. 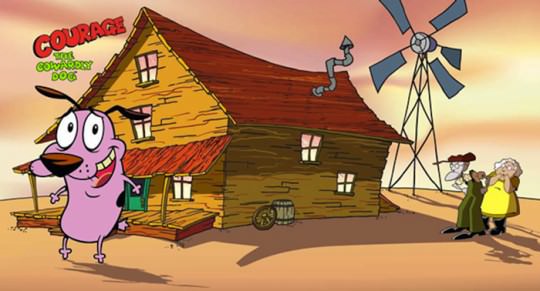 This animated series aired on Cartoon Network during the years 1999-2002. The premise was that Courage, a cowardly little pink dog who lived in the middle of nowhere, would have to keep some sort of ghost/demon/phenomenon from destroying his owners each episode. I have seen that poor little mutt terrorized too many times to count. The show had a very dark sense of humor, with plots that usually revolved around murder, death, and disturbed characters.

I was in first grade when I saw my first episode, titled “Freaky Fred.” Fred was a mentally deranged barber who was obsessed with shaving off people’s hair. Enough said.

Although characters came in funny shapes and sizes (a butcher pig here, evil eggplants there), they were always a little too disturbing for a Cartoon Network show. I mean, just watch this clip from the final episode:

DOES THAT LOOK LIKE A KIDS’ SHOW TO YOU? No! It looks like a David Lynch short, or your worst nightmare. Cartoon Network started re-airing the show not that long ago but it was moved to the later, more mature programming time of 2:30 AM. Obviously, Courage the Cowardly Dog was just too macabre for kids to handle. Thank you, Courage, for keeping me up all those nights and thank you especially for King Ramses:

That dude is the freakiest thing in cartoon history.

This 2002 horror novel by Neil Gaiman became a movie in 2009. I initially boycotted the film because I didn’t think it would live up to book’s creepiness, but many people have convinced me I would appreciate it. I still haven’t seen the movie, but I promise to in the near future! In the story, a girl named Coraline enters an alternate universe similar to her own, but in this one her mother is evil and everyone has buttons for eyes. That’s totally not weird at all. Not to mention the Other Mother has a history of kidnapping children, growing bored with them, and locking them in a closet for eternity. Freaky!

But the most disturbing part of this children’s book—I repeat, this is a book for CHILDREN—is the illustrations. I’m a visual person; images stay with me forever. Therefore exceptionally eerie pictures are basically burned into my brain and I NEVER FORGET. 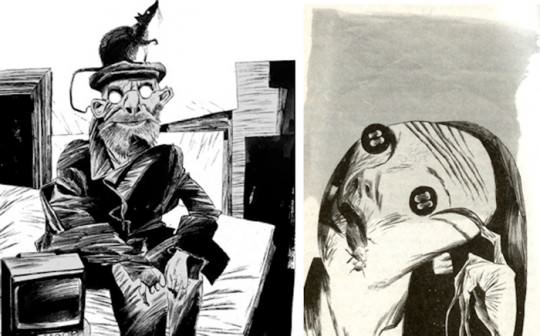 A crazy old man + the Other Mother eating some sort of beetle. Yum!

“‘Come here, little girl. I know what you want, little girl’…She walked through several rooms with low, slanting ceilings until she came to the final room. It was a bedroom, and the other crazy old man upstairs sat at the far end of the room, in the near darkness, bundled up in his coat and hat.”
– Coraline, Chapter 10

…makes for a nightmarish novel. But like LITERALLY nightmarish because I am pretty sure I had several different fever dreams involving buttons being sewed onto my parents’ eyes. Aaaah!

A Series of Unfortunate Events 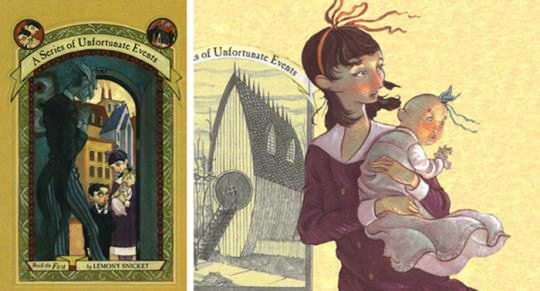 I was really into this series of books, by Lemony Snicket, as a child. Due to their dry, black comedy the books read like Coen Brothers plots for kiddies, or at least that’s how I remember them.

The premise of the series is that the three Baudelaire children live a fantastic life with loving parents until their house burns down. Whomp-whomp…the parents are dead and the kids have to move in with a creepy cousin named Count Olaf who eventually tries to marry the eldest daughter, Violet, to gain their inheritance. Did I mention Violet is 14 years old? It’s OK, though—the three Baudelaire orphans end up escaping Olaf and moving on to different homes with wonderful adoptive parents. Oh, but then Olaf tracks the kids down and kills their new parents. Like, in every book. Seriously. So in this series we’ve got a serial killer pedophile trying to ruin the lives of three unfortunate orphans. I think my teacher read this series to my class in second grade. How fun! 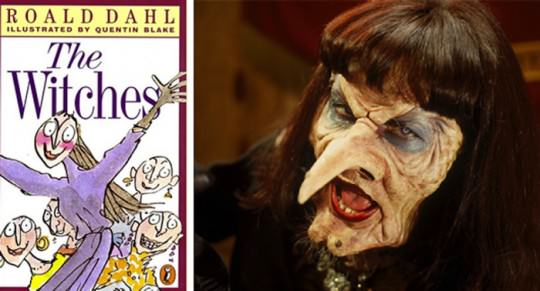 Who could forget this amazing Roald Dahl book, originally published in 1983? I read it in 2002 (second grade), but it was still terrifying. The story of a boy who ends up stuck in a hotel that is hosting a witch convention, The Witches is gruesome and haunting.

I must say the movie might have scared me more than the book. Who could forget the Grand High Witch’s ugly face in the film? Ew! I will never forget the story of the girl who was trapped in a painting by a witch.

That story has freaked me out since I was a child. I just watched it again for the first time in years and now I know I won’t sleep tonight. “Papa…papa…” 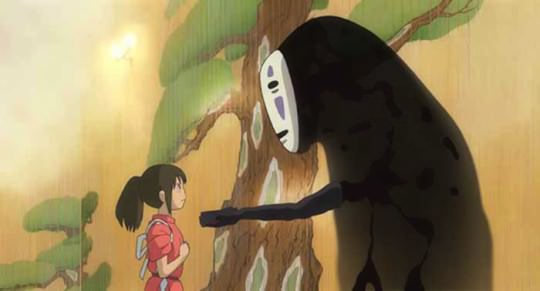 Spirited Away, or Sen to Chihiro no Kamikakushi, is an animated Japanese film written and directed by Hayao Miyazaki. The movie opens with Chihiro, a young girl, riding in a car with her family, to their new home. They stumble across an abandoned amusement park, and Chihiro’s parents are distracted by a delicious-looking buffet. Her parents start eating and then, yada yada yada* … suddenly Sen’s parents have turned into pigs and there are ghosts and monsters all around her. Woah Nelly, what happened?! Chihiro’s name is changed to Sen for work purposes and she is forced to work in a bathhouse to try and save her parents. While catering to a variety of creepy spirits, she eventually befriends the creepiest ghost of all: a tall, dark, masked thing named No Face. SPOILER: turns out No Face has anger management problems and eats people. If you haven’t seen the movie, please do because I cannot even begin to describe how terrifying this creature is.

It’s very easy to categorize this movie as a sort of twisted fairy tale, but underneath the surface lies an even more terrifying concept. Spirited Away, according to some movie critics, is actually a metaphor for child prostitution. I can see why the Disney Corporation (the film’s American distributor) wouldn’t want to promote that interpretation. On its own this is a really unpleasant story with some horrifying imagery, but this metaphor might be the scariest thing about it.

Where the Wild Things Are + In the Night Kitchen 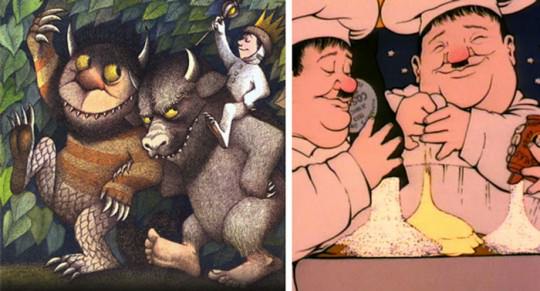 Now these items, ladies and gents, are the scariest children’s media OF ALL TIME. Many of you may be familiar with Maurice Sendak’s Where the Wild Things Are, my very favorite childhood book. After being sent to his room for being bad, a little boy named Max uses his imagination to whisk himself away to an island inhabited by Wild Things. At first the Wild Things want to eat him, but then they embrace him and make him their king. Then Max feels homesick and wants to leave but the Wild Things are like, “Oh no, please don’t go; we’ll eat you up we love you so.” We’ll eat you up we love you so? Is that not the creepiest ever? This book has frequently been banned due to its obviously controversial content, but little children still love it because all little children love books about adventure!

But did you ever see Maurice Sendak’s short film In the Night Kitchen?

Yes, this is a video made for children! I don’t know about you, but I have nightmares all the time about three fat bakers who try to bake me alive inside of a cake. Not to mention those three men definitely look like Hitler. Right? My favorite part is when the boy (while in the nude) floats past his mother whispering, “Mama.” Or maybe my favorite part is when the boy is BAKING IN AN OVEN? Sendak is crazy terrifying, but apparently that’s what it takes to make a good kid’s story/TV show/movie. Sheer terror and a lot of scary. ♦

* This is a Seinfeld reference.