The Perks of Being a Killjoy

Figuring out how to call people out on their bs. 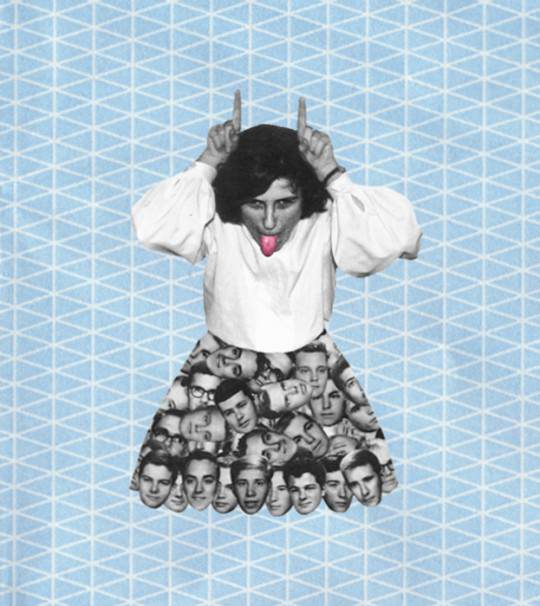 You’ve probably been in a situation at some point where someone you’re with makes a comment—about women, girls, people of color, queer people, poor people, whatever—that pisses you off, and you don’t know if you should say something, or how to say something. We have too. So we talked it out on Facebook.

TAVI: So I’d like to talk about figuring out how to call people out when they say something that offends me as a girl, and calling them out in a way that will actually be effective. Like if you’re with a group of friends and someone says that Rihanna deserved it, or in class when someone says that Jane Eyre needs to quit her whining and enjoy her life as a domestic governess, and you wanna say something, but you don’t know how.

Most of the time I don’t really care if people don’t get what I’m trying to say or do, but in this case, I want them to understand. I feel bad if I don’t say anything, because history (on a large and a personal scale) is full of people who maybe wanted to say something about injustice or inequality but knew that to do so would not make them many friends—and some really messed-up things happened or continued to happen for the sake of the comfort of the people who wouldn’t or couldn’t say anything. (This comment has been sponsored by Say Anything, starring John Cusack, coming out April 14th, 22 years ago.)

If I react in an angry way, I only perpetuate the Angry Feminist stereotype; if I’m nice, I feel like I’m just complying with the idea that women have to be nice and aren’t allowed to be angry. Of course, discrimination can be very personal and beyond my own experience, and I wouldn’t want to tell anyone how they’re supposed to feel or react to anything they feel strongly about. So this isn’t about deciding how angry anyone is allowed to be…I guess it’s about figuring out how to use that anger.

LORI: This issue is so so tricky! Tavi, I think you hit the nail on the head when you describe a certain lose-lose element to calling people out on their bullshit. Speaking up can alienate people or get you quickly dismissed the next time something comes up, but staying quiet can feel like a personal failure or a soul-crushing moral sacrifice. There should be a name for this. The Pansy Paradox? Catch Twenty-[Something]?

I think it’s more of an art than a science to determine when and how to call people out. But I feel like I trust myself to make those split-second decisions based on some loose criteria:

PIXIE: I have found that it’s always better to challenge people than to yell at them. “What do you mean by that?” or “Do you know what that word really means?” or “Did you know that’s actually offensive?” is usually more effective than just saying, “That’s offensive” without providing an explanation as to why. Nobody likes to be accused of being racist/homophobic/sexist, etc., especially people who don’t realize that they’re being that way.

ANNA: I remember when I first got into feminism, I REALLY got into it. I believed that the world could be divided into two kinds of people: those who identified as feminists, and those who just did not like women. I tried to “convert” everybody who didn’t see things my way to the magic of gender equality.

Of course, I still believe that feminism is incredibly important and that we have a lot of work to do. But damn if my older methods weren’t exhausting. Now, part of it is knowing when to pick your battles, as Lori alluded to—sometimes I have to ask myself, “Do I have the mental energy to deal with this sexist prick today? Or is this the type of thing I should try to ignore now and mock with my friends later?”

TAVI: I feel you on the first-getting-into-feminism thing! Lots of rage there. Which I fully support! I think it’s so important to recognize unfair bullshit and be angry about it. And in the moment, when a person in one of my classes says something I take offense to, I do feel angry. But I’ve learned that going off on people or rolling my eyes to make them feel stupid or throwing all these terms of feminist theory at them doesn’t really work. If anything it’s gotten me stereotyped as The Feminist, and then nothing I have to say is considered because apparently I’m just looking for things to complain about.

Like when we read Things Fall Apart in English and we had to say whether we would want to live in the Igbo culture or not and one guy made a half-serious joke that he would because then he could have multiple wives and abuse them. Once I was literally met with applause for just for speaking up and telling that specific guy off, but it was way more the girls. I think the guys felt attacked.

So then…where’s the place for this RAGE? What are some ways to express it when you don’t wanna be perfectly nice and thoughtful, when you just wanna be mad, as you deserve to be, about how messed up things are?

ANNA: That reminds me of something that happened to me once at a party. I decided to call someone out for saying something, but I did it in one of those super-elaborate, trying-to-avoid-confrontation, “don’t you think there is a better way to go about this conversation” kinda ways and it was followed by an awkward silence where I thought, Oh crap, now I’ve ruined this party for everybody. But my point was taken and the subject was changed and within minutes the tension was gone. Later, a woman came up to me in private and said, “I was thinking the same things but was too nervous to speak up.”

The moral of this ambiguous anecdote is: sometimes when you think you are being the “humorless feminist,” you might be saying something that everyone was thinking but didn’t want to be the one to bring it up.

Melissa McEwan wrote a wonderful essay about the relationships between women and men for her blog Shakesville, called “The Terrible Bargain We Have Regretfully Struck.” There is this one line that particularly resonated: “Swallow shit, or ruin the entire afternoon?”

CINDY: Here are my two cents on “calling someone out”:

ANNA: Humor is SO important. I mean, sometimes I have that feeling that Tavi mentioned where I think if I try too hard to be funny I am just buying into that “feminist are humorless” stereotype by being determined to prove them wrong.

I feel that this post by our own Sady Doyle on her site Tiger Beatdown is relevant here.

TAVI: I’d like to add though that sometimes it’s just the wrong time, and you shouldn’t feel guilty if you weren’t sure how to say anything so you just didn’t. Most of the time I’ve been glad I said something, though. Also, GUYS I THINK I ANSWERED MY OWN QUESTION ABOUT THE RAGE THING! Because a bunch of rad zines just came in the mail. Zines! And music! And art! Taking all that anger and energy and doing something that makes you feel a release, feel creative and productive—and bigger movements, I think, like the energy at SlutWalk—are amazing. But now that I think about it, I guess I am composed when I wanna get my point across but I let Bikini Kill act as my therapy…

ANNA: Sometimes, having all that rage by yourself can feel overwhelming. But when you can channel it into an artistic outlet or political movement—I mean, goddamn. It’s like an extra “fuck you” to the patriarchy when you can take all the shit they throw at you and turn it into something beautiful. ♦