The Enchanting Charm of Elle Fanning

Taking a break from this month’s teen witches to bring you some unabashed enthusiasm. 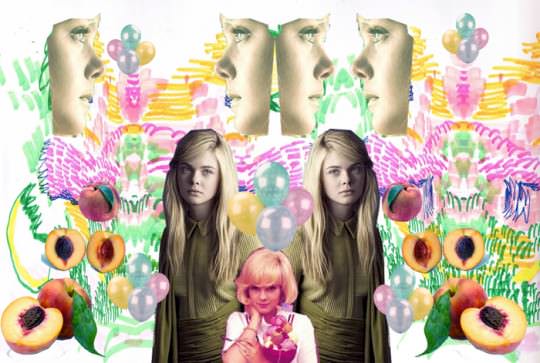 When Stephanie wrote about ways to improve a bad day last month, she forgot to include maybe the best instant-happiness supplier of all: Elle Fanning.

She was sweet and secretly wise in Somewhere, and a badass in Super 8, but my (probably universally shared) girl crush on Elle is also for her her-ness. She has personality and style, and, I don’t know, maybe a slight golden glow appears around her face when she smiles! Do not, however, mistake this special quality of hers for the same surface appeal of various young and famous ladies labeled “It girls.” She’s talented, remember? And smart. So smart that I was tempted to ask about her process and career but she’s such a goddamn fairy that I just wanted to know what kindsa things are in her world instead. Her enthusiasm for art and film and fun turned out to be infectious. I became this weird, giggly, nice person talking to her, and I think my voice even ranged more than two octaves! It was amazing! My apologies to your puberty if this interview undoes any of your own voice-deepening.

TAVI: So, I know that you really like The Virgin Suicides. Can we just freak out over how good it is for a sec?

I think just the girls in it, and their moodiness. It’s so cool. And the style of it, the way [Sofia Coppola] filmed it. I take a lot of style inspiration from that movie, and from how the girls in it dress. I have blonde hair like they do, so I sort of feel like I can pull it off. I try to, at least! [Laughs]

You totally pull it off!

One of my favorite things about that movie is their teenage bedroom and all the little details. Do you have any little keepsakes or favorite parts of your room like that?

Every year I get a new Barbie calendar and there are all these old Barbie dolls on the calendar, and I’m very obsessed with schedules and everything, so I love writing in different things that I have each day on it. So that’s one of my favorite things in my room. I also am obsessed with Marilyn Monroe, and I went to an auction and got her face cream and powder. Her actual one!

I know! Crazy! So I have that in my room. It’s literally the best thing ever. The lotion on it is sort of glued shut but the powder, some of it’s still in there.

That’s insane! You need a Marilyn Monroe Barbie, though—do you have one?

I do, I do. I have the “Diamonds Are a Girl’s Best Friend” one, and I have the Seven Year Itch one, with the white dress.

What are some other things that influence your style?

I’ve recently gotten really inspired by the ’60s. I don’t know if you know her, but Sylvie Vartan is a French singer from the ’60s and she has platinum blonde hair and she wears her hair in pigtails sometimes. She’s super cute and I just discovered some of her music. It’s in French so I don’t really know what she’s saying, but it’s still pretty cool! [Laughs] And I like the way she dresses. If you look her up online you’ll see some of her pictures. She’s cute.

Do you take a language at school?

Yeah! I take French at school but I’m only in French B, it’s like 2nd year. It’s OK. I wanna learn it. I’m trying really hard! It’s such a pretty language. So girly. I can understand people better than I can speak it. I feel sometimes embarrassed to say it to people ’cause you feel like you’re totally screwing up the language and you sound awful.

Since I do a lot of artsy stuff outside of school—ballet and singing and stuff like that—when I’m in school I like to be super studious. I like science. That’s my favorite subject.

It’s going good. Do you have a school uniform?

I know! Isn’t it crazy? [Laughs] We have the plaid skirts and things like that. We have to have a white collared shirt, and then in junior high and high school it’s khaki bottoms—so skirt, shorts, or pants—and then plaid if you want.

Some of our readers have been looking for ways to make their school uniforms more fun. Do you add anything, accessories when you can?

I do. I try to add belts to the high-waisted pants. I actually got these really cool ’80s khaki pants—I think they’re men’s, so they’re super big, but they look cool when you pull them up really high with a belt. Last year all the girls got in trouble for their short skirts, and it’s sort of happening again, so I’m trying to do the opposite and I’ve decided that the longer plaid skirts look sort of cuter in a weird way. If you wear them a tad longer it makes them look, like, super school-uniform. So I like it.

I read that you’re from Georgia. Do you guys visit there a lot?

Yeah, we try to. My dad’s the youngest of eight kids, so I have 14 cousins in Georgia. So we try to go back whenever we can.

What’s your favorite place to visit?

I like New York. I used to only go there for work and stuff, and so now that my sister has moved there, ’cause she’s going to NYU, I feel like I can go there just for fun, just to visit her, you know? So that will be better. But I like the feeling you get there.

Do you have any pets?

I have a dog and a horse and a fish. My fish has actually been alive for about four years. And that’s pretty good!

Yeah! They’re supposed to die after like a week!

I know! And it’s like a generic goldfish, too. But it’s a weird color. It’s see-through, so you can see its veins and stuff. It’s so weird. It’s like fluorescent.

It’s probably like the spirit of Marilyn Monroe keeping it alive.

Thank you so much for doing this. Good to talk to you!