How We Dress Does Not Mean Yes

A report from SlutWalk NYC. 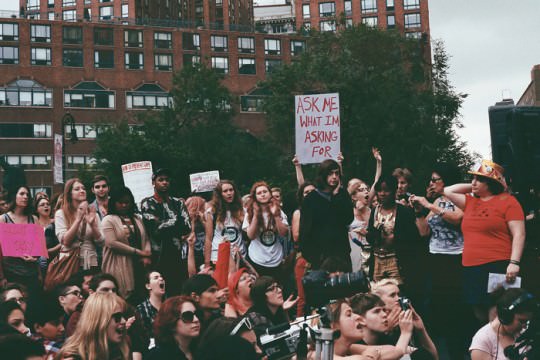 All photos, except where indicated, by Maya Dusenbery.

This past Saturday morning, I was running late to meet my friends, so I didn’t have time to think too hard about my outfit. I pulled on my favorite pair of jeans and a T-shirt—my default ensemble when I’m in a hurry.

I looked at myself in the full-length mirror on my closet door, twirling my body around to each side so I could view myself at all the angles that others would soon be seeing. How does my body look in these clothes? I thought as I eyed my own ass. Is this shirt/jean combo flattering? Do I like how I look? I didn’t bother to worry about things I would usually consider, like if I was showing too much skin, or if my jeans were too tight.

There was nothing particularly special about the outfit I chose to wear that morning, except for one thing: it was Saturday, October 1st, and I was headed to SlutWalk NYC. I was in a good mood. I felt free and happy. And I wanted to look good. I wanted to feel pretty. Hot, even. And I didn’t feel guilty, ashamed, or scared to admit it. 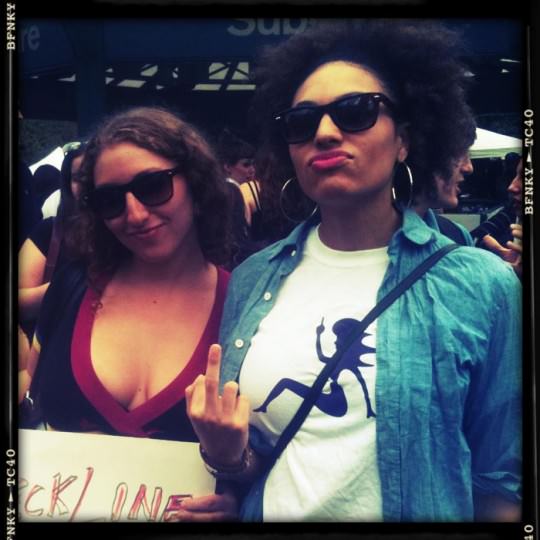 That’s me on the right, being a faux badass with my friend Nona. Photo by Amanda Marcotte.

SlutWalk is a march against sexualized violence. While it’s similar in a lot of ways to existing movements like Take Back the Night, SlutWalk is also new in some very big ways (big in some very new ways?). It began in Canada when a Toronto police officer said that women should “avoid dressing like sluts in order not to be victimized.” It has since spread to cities all over the world, including LA, Philadelphia, London, Amsterdam, Buenos Aires, Capetown, Hong Kong, and my very own New York. 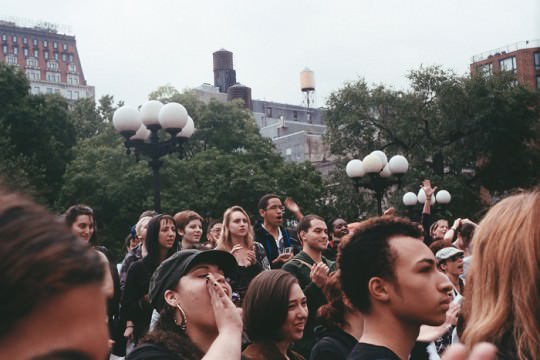 I write for Feministing and work in women’s health here in NYC, and I’d been doing some organizing for this event. I had been pleased to find a diverse and friendly group of people involved in the preparations, including second-wave feminists in their 60s and 70s, students, artists, young professionals, journalists, and activists of a multitude of genders and races.

I was especially thrilled to see high-schoolers at the meetings. Indicators and definitions for slut vary widely by cultural context, but I think it’s safe to say that the teenage experience is pretty universally filled with strange and sometimes bizarre encounters with sexual roles, responsibilities, experiences, and expectations. From piercing catcalls to ghost boobs, high school can be a site of great sexual pride and deep sexual shame. Some girls have to endure street harassment on their daily walk to school. Others get shamed for having lots of sex, or having any sex, or seeming like maybe they’ve had sex at some point, or maybe they had a sexual thought, or were molested or raped or … it’s endless what people will shame you for. 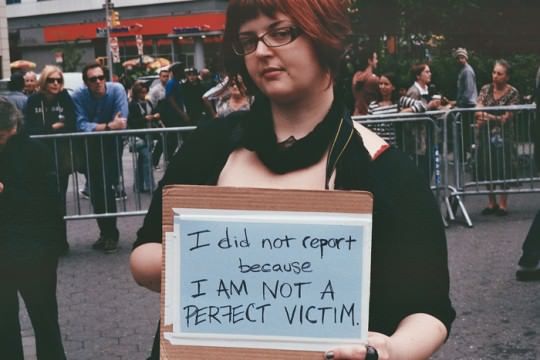 In high school, I had the good fortune of running with a crew that liked to celebrate positive sexual experiences; as it happens, my best friend from childhood is now a sex-positive educator and activist. (We once made a condom kite together for geometry class to raise awareness about STD prevention. Seriously! We covered the kite with condoms, which filled with air when the kite was in flight, making it more aerodynamic. But I digress.) Our tight-knit crew boasted a variety of comfort levels and values around sex. We were like a United Colors of Benetton ad, but with diversity of sexual experience as well as color. 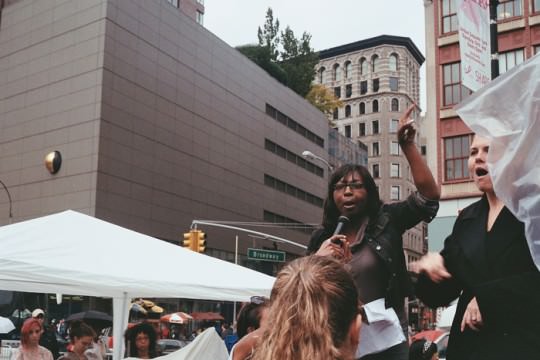 Fast-forward to two days before Saturday’s march. Word spread around New York that in response to a series of sexual assaults in Park Slope and surrounding neighborhoods, Brooklyn police officers were telling women not to wear shorts or skirts in order to avoid being assaulted. It was like Toronto—and high school—all over again.

That’s why, on the day of the march, I felt determined to escape, if only for one morning, this idea that clothing has anything to do with safety. Even though I found that I didn’t really want to wear a skimpy outfit to the march (it was cold, and I liked the clothes I had on), just the idea that it was OK to look hot, to look like a young female human being with a body, and it was OK to want to do so, was incredibly liberating. Marching with thousands of like-minded community members in a protest that was escorted and permitted by police made it possible for many of us to attain previously unimaginable levels of safety. In a city where women are taught to cover their bodies if they want to be safe, a girl was able to march topless alongside me in Union Square, unafraid. No boundaries, no threats, no consequences. 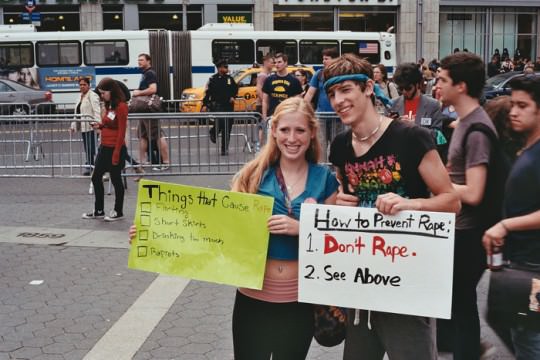 All of a sudden, I felt a rush of gratitude to the SlutWalk founders and organizers for creating such a moment for me. It was like the antithesis of my high school hallway and one of the few times in my life that I recognized how traumatizing it had been to walk the halls feeling policed, judged, and disrespected—to walk the halls feeling like my social and physical safety were dependent on other people’s impressions of how “good” and unassuming I was being.

The rest of the march was amazing. Everyone was gorgeous and vibrant and brave. It felt exhilarating to be part of something so big, and to know that I was becoming part of an international movement to support victims of violence and assault, of which slut-shaming is a part. And it was just fun to be in the middle of a group like that, protesting something together, yelling together, chanting, and listening to live music.

I don’t want to lie and say it was a perfect day. There were certainly some bummer-inducing aspects to the march: rain, another march that unfortunately coincided with ours, and some last-minute and important critiques around SlutWalk’s inclusiveness and diversity that resulted in several valuable speakers pulling out in the 11th hour, including my friend and colleague Jamia Wilson. As a woman of color who helped organize and marched in the rally myself, that last one was an especially hard pill to swallow, though of course I respected all of these women’s decisions. I took the criticisms issued at the march very seriously, and have written about the deep ambivalence I feel toward SlutWalk, even as I feel so passionate about it. 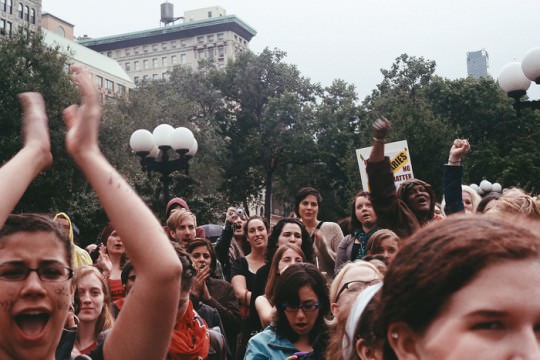 But SlutWalk was still a pretty powerful moment in my life. Plus, it was a lot of fun. It helped grant me the explicit permission to exist simultaneously as a sexual being and as a full member of society, worthy of safety and love.

P.S. Here are some of our favorite signs from the march. (These snapshots were taken by Anaheed.) 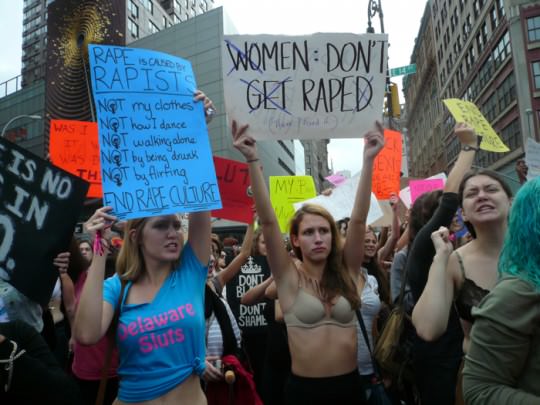 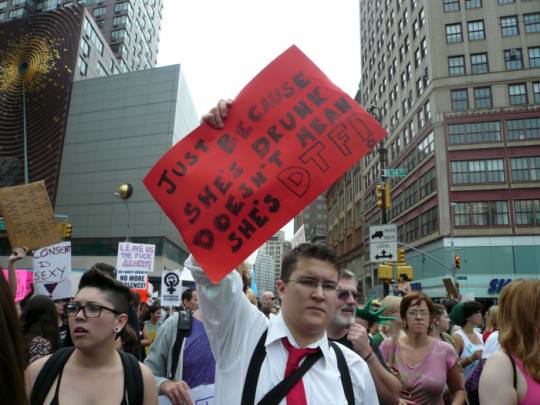 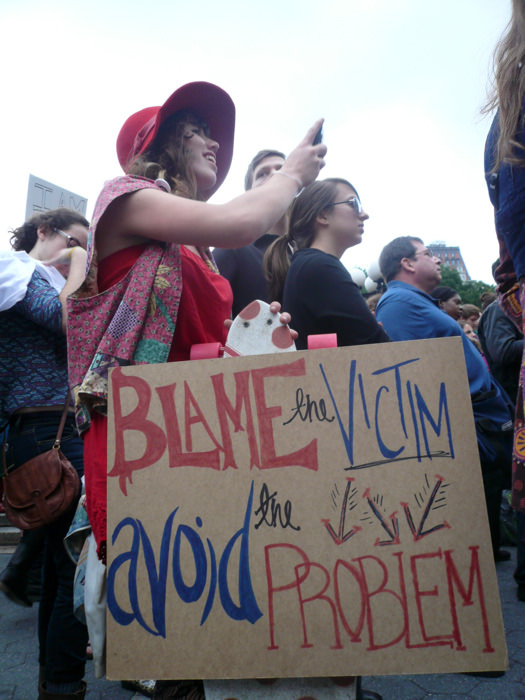 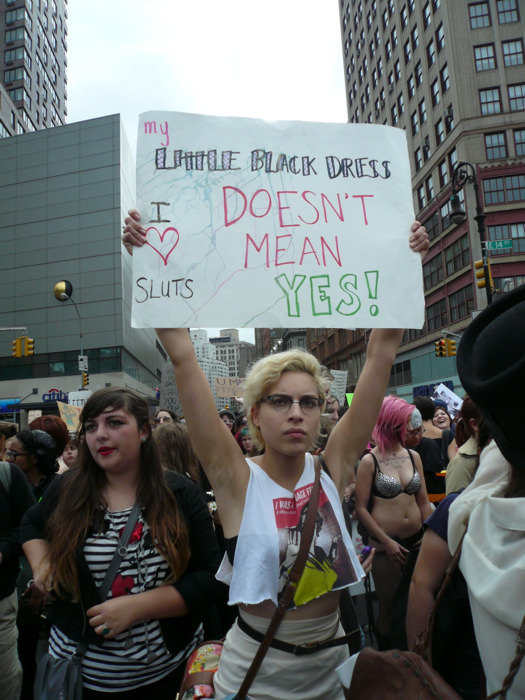 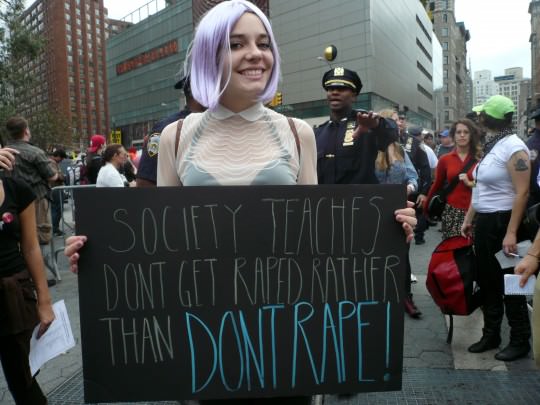 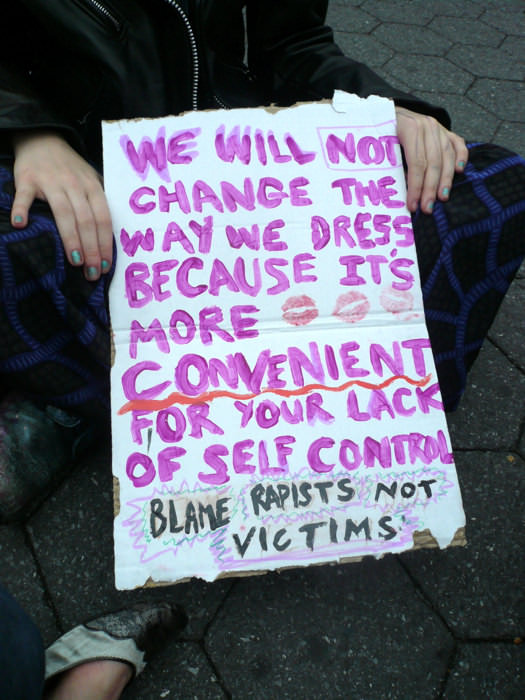 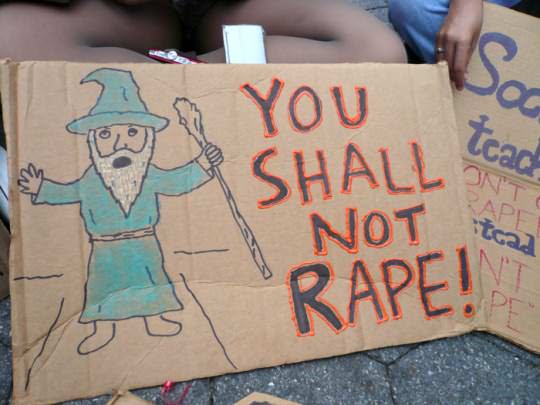 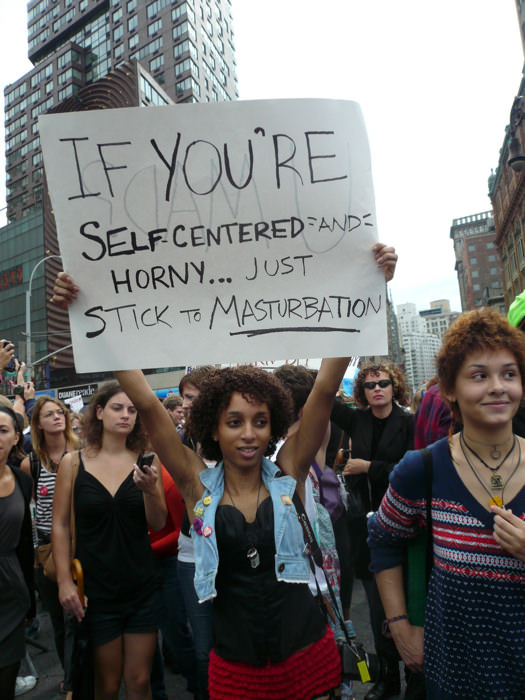 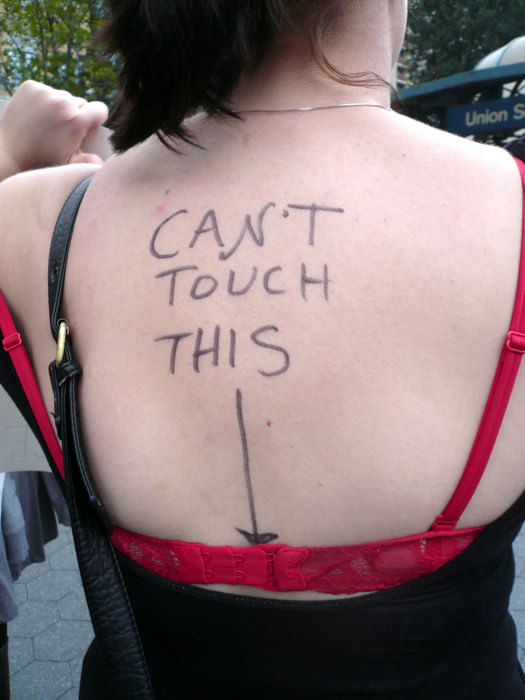 We ran into some of our friends there, too! Like:

Molly and Arabelle from the Teen Witch story: 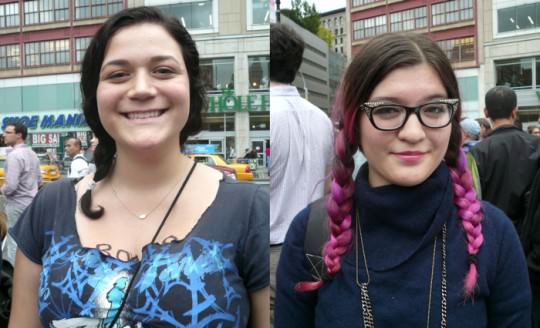 And Claire’s Diary, who are doing this month’s theme song: 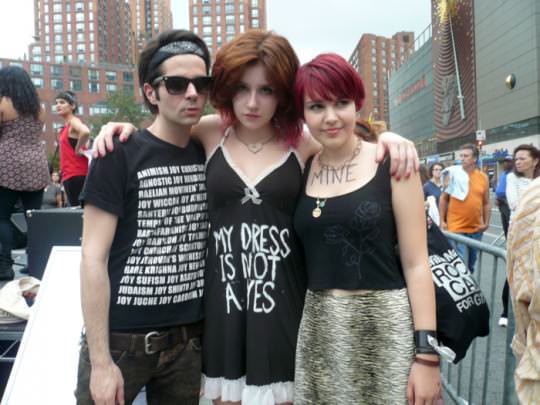