Secrets of the Top Bunk

It came from above and landed with a thud. 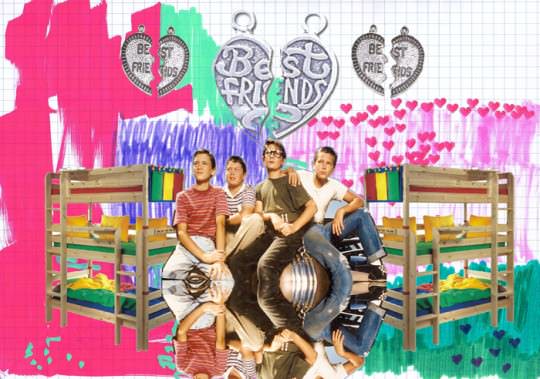 It was usually on my bunk bed.

I didn’t share a room with anyone, so the top twin mattress typically sat empty. But on the weekend nights when I was lucky enough to host a sleepover, that’s usually where it happened. After hours spent chugging IBC root beer from glass bottles and mimicking stunts we saw on Jackass, the sugar high would start to fade and we’d crawl into bed. Sleep was still a long way off.

The lights went out. Our voices were hushed. There were long stretches of silence. And then: I felt really stupid when I saw Gretchen holding hands with that other guy. It came from above and landed with a thud. Admissions of weakness meant Serious Time was upon us.

There’s a wooziness to getting sleepy that’s like being drunk, although of course we wouldn’t know that until much later. It makes for the same kinds of confessions and the same sort of honesty. I often didn’t know what to say, but my best friend understood I was listening. When I had updates on a secret crush of my own, I would reciprocate, as if to say, here, you keep mine and I’ll keep yours. That way neither of us could afford to let go—it was mutually assured destruction. I talked to her on AIM until 1 AM, I might admit. Both the action and the confession were out of character.

The real secret about secrets is that boys have them, too. Not just secret crushes, but also fears about school, concerns about our bodies … you know, secrets. When boys are behind closed doors, late at night, there’s a lot of giggling and sometimes tears. Sound familiar?

I asked some current teenage boys about their closest confidants and they confirmed some things I experienced in my own bunk-bed days. If a teenage boy has a true best friend—that is, someone they tell more than just the superficial stuff—it’s almost always another boy. Girls are cool, but they’re often speaking a different language and you can’t really invite them for a sleepover. And nothing facilitates sharing like darkness and pajamas.

The biggest bombshells I remember came one night when my best friend told me about his family problems. He was a perceptive kid, and so he knew more than he should have about his parents’ rough patch. He was angry, so I was too. And it only could’ve happened in the bunk beds, late at night. The only other time we talked about it, over food-court pizza, it was harder to discuss. I think it was the eye contact.

Dr. Niobe Way, who wrote a book called Deep Secrets: Boys’ Friendships and the Crisis of Connection, spent 20 years interviewing young dudes around the world about this stuff. The stereotype of boys not being emotional and not wanting intimacy couldn’t be more wrong, she found. “Boys want that kind of stuff as much as girls do!” she told me excitedly.

We usually work best one-on-one, she said, and though our sleepovers are very different from girls’—there’s usually no nail painting or MASH games—sleepovers are as sacred for guys as they are for girls.

The difference is often in our way with words. Guys use physical, macho language about their best friends and secret-keepers (“He had my back”) while young women tend to stick to more-emotional explanations (“She was there for me when I needed her”). “But the substance is the same,” said Dr. Way.

All of this is in the ’80s movie Stand By Me. The boys in the film confide in one another, and they tell their secrets late at night. While their secret was more dramatic than most (a dead body), my group of guys included the same types: the dreamy one, the troubled one, the chubby one, and me, the peacemaker. Gordie, in the movie, grew up to be a writer, too. Within the group, each dynamic was distinct, with some pairings more natural than others. As we got older, most of us grew apart, but the best best friends—the ones who shared secrets—remain close today.

Dr. Way has written about how accurately that film captures male friendships. “I never had any friends later on like the ones I had when I was 12,” says adult Gordie at the end. “Jesus, does anyone?”

We all wish we did, but it rarely lasts, and that, too, can come down to secrets. After all, adult sleepovers are rare, often replaced by dating, and so best friendships can fade.

The rewards of maintaining those secret-based relationships, though, are worth it, which Dr. Way illustrated to me with science. In an experiment she writes about in her book, someone is given a weighted backpack and told to stand at the bottom of a hill, where they’re asked to look up and estimate how big it is. If the participant is standing next to a trustworthy friend, they tend to estimate the hill as less steep than if they’re standing alone or with someone they dislike. Your friend’s support doesn’t even need to be spoken. You just know he’s got your back. ♦