There Is a Light That Never Goes Out

What The Rocky Horror Picture Show meant to me (a lot). 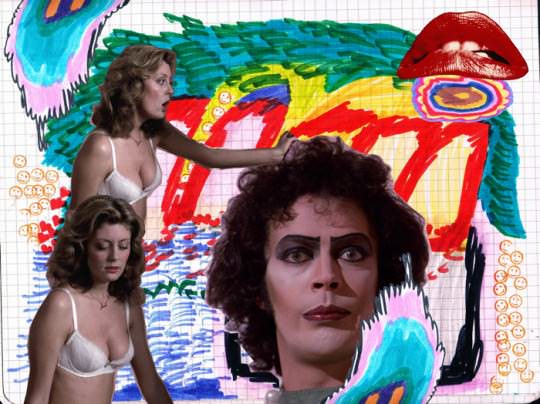 All illustrations by Minna.

The year I turned 13 (exactly 20 years ago this month!), two very special men came into my life. While they both had long, flowing hair, androgynous costumes, a yearning for togetherness, and a flair for controversy, they couldn’t have been more different. One of them was Dr. Frank-N-Furter, the Transylvanian transvestite from The Rocky Horror Picture Show. The other was Our Lord and Savior, Jesus Christ.

Let me explain how these two fellows wound up in my life. It was 1991 and my parents had been divorced for about seven years. I lived with my dad, but my mom would sometimes come over to our house and they would treat each other with the kind of stilted cordiality you usually reserve for people you run into at the airport—you know you know them from somewhere, but you don’t want to ask their name because it might offend them and you also vaguely remember that this person may have a tendency toward violence.

I’ve always been the perfect example of the introvert/extrovert personality-type dilemma. When I was young I was painfully shy, to the point that I think my dad was a little concerned. He went out of his way to enroll me in extracurricular activities: karate class, art class … he even forced me to be a mime (“PLEEEEEEEEEEASE DON’T MAKE ME BE A MIIIIIME!” I’d sob on the car ride to mime class). I didn’t want people to see me or know who I was. On the other hand, I loved making my friends pretend to be the band Blondie and force performances on the mailman in the lobby of our apartment building, so go figure.

To further his campaign to bring me out of my shell, my dad also encouraged me to audition for my junior high’s production of The Phantom of the Opera. I secretly yearned to be onstage, but was petrified to let anyone know. My father helped me prepare, though, and I got a small part. I was over the moon! I had heard that junior high was a treasure trove of freaks and geeks, but didn’t know where to find them. Turns out they were all lurking in the theater department (duh). That’s how I first heard about The Rocky Horror Picture Show.

For those of you who don’t know what Rocky Horror is (where have you been since 1975 aside from mostly not born?), I will try my best to explain it, though it is difficult because on one hand it is a silly piece of nonsensical fluff and on the other it is a way of life.

While it was a huge hit onstage in London in the early ’70s, Rocky Horror didn’t do so hot in the movie theaters upon its release in 1975. It did, however, manage to generate a crazy midnight-movie cult following a year later, which continues to thrive around the world as we speak.

At the midnight showings, a live cast of performers act out the entire movie while it plays onscreen behind them. Everyone in the audience dresses up too, sings along, shouts audience-participation dialogue, and throws props at the screen. It is a giant slice of glittery mayhem and should be experienced by all before it is too late (death). (No, the Glee tribute ep doesn’t count.)

The plot, in a nutshell: Newly engaged squares Brad and Janet are so jazzed about their upcoming wedding that they decide to rush to the home of their friend, Dr. Everett Scott, to share the news. Unfortunately, their car gets a flat, so they walk over to a nearby castle hoping to use the phone, only to find there is an intergalactic science convention going on hosted by some singing, dancing aliens! Their leader, Dr. Frank-N-Furter (played by the supernova of talent that is Tim Curry), informs everyone that he likes to wear ladies’ undergarments and has just created a muscle-bound stud in his lab. Then there’s some murder and Mickey Mouse hats and cannibalism and everyone gets turned into a statue and winds up really horny and runs amok in fishnets and sings in a swimming pool and the castle blasts off into outer space, the end.

My best friends, fellow theater geeks Tiffany and Lisa, had snuck out one Friday night and gone to a midnight showing at the Fox Theatre on the Hill in our hometown of Boulder, Colorado. They returned with scandalous tales of feather boas, squirt guns, flying toast, loud rock music, and men in ladies’ underthings. It sounded terrifying, forbidden, and deeply, profoundly awesome.

A few nights later, my dad took my brother and me to his girlfriend’s house for dinner. Her name was Janice, which was hilarious because she had the same dippy, easygoing demeanor as the Muppet she shared a name with.

“Have you ever heard of something called The Rocky Horror Picture Show?” I asked over dessert.

“TOUCH-A-TOUCH-A TOUCH MEEEEE, I WANNA FEEL DIIIRTY!!!!” Janice bleated, to everyone’s dismay. “Come ON!” she hollered at her ungrateful audience. She left the dining room and came back with a CD. She handed it to me: it was the Rocky Horror soundtrack. “Try that on for size,” she said.

At that time I don’t think I even had a CD player (remember, this was sometime between when the unicorns vanished and when the Internet was born), so I couldn’t try it on for size until I was able to get to Tiffany’s house. She made a cassette-tape copy for me and I played it all night long and all over the weekend. I had no idea what the hell the plot of the story was, but I later learned that wasn’t really a concern.

One day after play practice Lisa and Tiffany asked me if I thought my dad would let me go to the midnight showing of Rocky Horror with them. I broke out into a cold sweat. I was dying to see it, but I was also secretly terrified. I’d never gone out without a parent before, not to mention I’d heard that newcomers to the movie had to be devirginized onstage! What did that even mean?!

That evening at home I asked my dad, “Ummm, I was wondering if it would maybe be OK if I went out with Lisa and Tiffany and some of their friends to see Rocky Horror on the Hill Friday night?”

“Taking two ladies out on the town, eh?” my dad said, waggling his eyebrows at me. I had planned a few good arguments on my behalf in case he said no, but to my surprise he immediately sad yes!

I called Lisa with the good news.

“What do you think I should wear?”

“I don’t know. What do you want to be devirginized in? I don’t suppose you have fishnets and a garter belt?”

“Oh dang it, they’re at the cleaners. I’m 13 for chrissakes, of course I don’t have fishnets!”

“All right, just go as a Transylvanian, that’s a safe bet. Black pants and jacket, white shirt, and a party hat.”

At the time, I didn’t really understand what that word meant. I’d heard it sung about in carols and talked about in church, so I knew it couldn’t have anything to do with sex, which had no business being in Christmas! In fact, when it came to sex in general, I was absolutely clueless. I’m not really sure why—my father was a hip single dad who fancied himself very progressive and very permissive. Maybe that was part of the problem: he thought he was so ahead of the curve that he just assumed I knew everything already.

In the past, when I’d asked if I could stay over at Lisa’s house, my dad would say, “OK, but make sure you wear a condom!” and laugh at me and wink, which made me blush nearly to the point of bleeding to death. I barely knew what a condom was. At this point I don’t think I’d yet been cleared of the misconception that “oral sex” meant chatting about it (if you haven’t been cleared of that misconception yet, don’t be embarrassed—but just for the record, oral sex hopefully doesn’t involve much talking, if any at all).

Looking back, I think there were a few contributing factors to my absolutely staggering sexual mystification. First of all, I was a late bloomer. I understood what sex was, technically, but I didn’t know what anyone expected me to do about it. The surges of hormonal energy I felt never seemed to be directed at a particular object.

Also, whenever sex was mentioned in school it was always referred to in some man-lady context. Maybe I would have felt more interested in it if I knew other configurations were possible. I wasn’t in denial about being gay; I just didn’t get that it was an option.

Don’t think I didn’t hear it though, the tittering and murmuring behind my back and to my face: “Is he gay?” “Do you think he’s going to grow up gay?” “Are you gay?” Or the sophisticated adults who prided themselves on being terribly open and accepting: “You’re gay, right? Don’t be embarrassed, it’s fabulous!”

If I was too young to know what a virgin was I was also definitely too young to know what gay meant. Besides, nothing deflates the fun of self-discovery like a bunch of loudmouths with the advantage of not being you telling you just who and what you are. By the time I realized that I was attracted to men I was ready to stay in the closet for another six months like a big gay groundhog, not because I was ashamed or in denial, but because I was a teenager and was fully committed to being the opposite of whatever anyone said I was, so there!

The Friday we planned on going to the movie Tiffany handed me a note between two classes. At the top of some fringed paper ripped out of her spiral notebook, she had written, in big purple block letters: “ROCKY HORROR KIT.” She then wrote out the list of props I’d need to bring to the theater for the audience participation part: 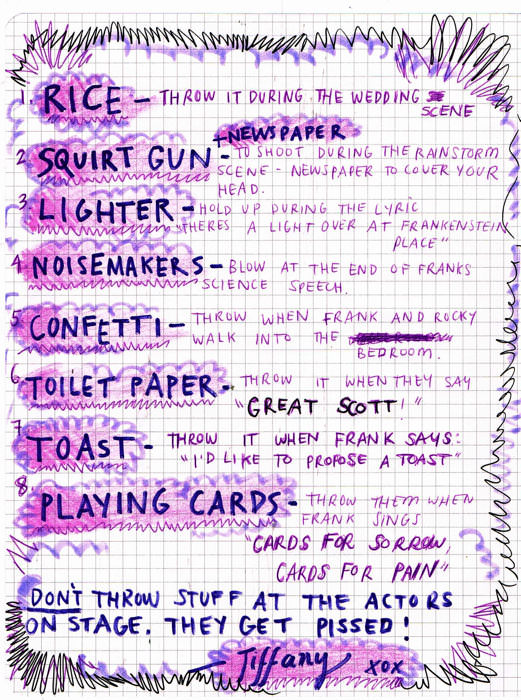