River Phoenix and I are still going steady. 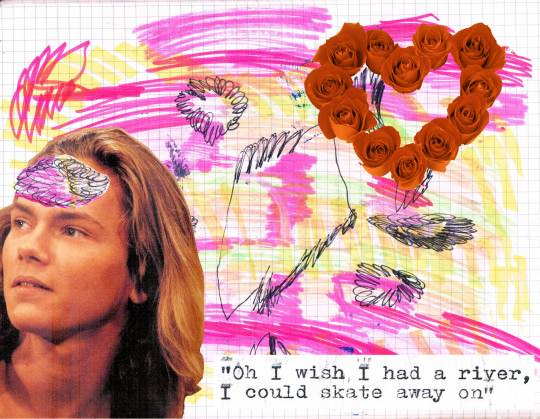 I was 13 on Halloween in 1993, when River Phoenix died of a drug overdose in front of the Viper Room on Los Angeles’s Sunset Boulevard. I was already wearing all black, in honor of the holiday, when I heard the news; I kept on doing so, in mourning, for the next few days, despite my school’s dress code, which stipulated navy blue and khaki. Though some of my male friends teased me, most people (teachers included) understood that I was sick with the loss, and gave me a wide berth.

Though we’d never actually met, River was one of my true loves, and I couldn’t believe he was gone. I loved his delicate, almost feminine face, with its high cheekbones and narrow eyes. River seemed tough, but, unlike other actors his age, also sensitive—dreamy and faraway. There weren’t any boys like River in my school—as far as I could tell, there weren’t any boys like River anywhere in New York City. When Sassy magazine published a story called “I Saw River Phoenix Brush His Teeth,” I knew just what they meant—that it was amazing to imagine such an otherworldly creature doing something so pedestrian.

River was my first in a series of dead (imaginary) boyfriends, a list that included Jeff Buckley, Chet Baker, and the king of all dead boyfriends, James Dean. These fall into two camps: the already dead (James Dean and Chet Baker, by the time I got to him) and the phonecall-in-the-middle-of-the-night (River, Jeff Buckley). I had a type—waifish and likely to moan, prone to drug use and looking good in black-and-white photographs. River’s death was the hardest to take—we’d grown up together, at least from my admittedly obsessive and skewed perspective. My family and I would talk about River ad nauseum over pancakes on weekend mornings, planning our future life together. My parents liked River, too—his portrayal of tough-kid Chris Chambers in Stand By Me had won us all over, and I think we collectively wanted to feed him, to make sure he was doing OK. His photographs, clipped from magazines, wallpapered my bedroom. I watched all of his movies over and over again, the good ones (Running on Empty, Stand By Me), the bad ones (A Night in the Life of Jimmy Reardon), and the late ones that hinted at the drug troubles to come (The Thing Called Love, My Own Private Idaho).

What is it about stars who die prematurely that is so hard to resist? Is it the unrealized potential, or is it that we never have to see the inevitable downfall? The dead-sweetheart phenomenon holds true across gender and generation: Marilyn, Kurt, Selena, Tupac, and Heath all fit the bill. There are countless actors and actresses and musicians who peak early and then vanish from view, and college kids don’t have posters of them on their dorm room walls. There is something inherently morbid about being a teenager, and I think the romance of the sex/death connection is never stronger than when you’re in high school. After all, who doesn’t read Romeo and Juliet and think, just for a second, that it’s the only satisfying ending?

There were, of course, other women in River’s life—Martha Plimpton, his co-star in Running on Empty, and Samantha Mathis, his co-star in The Thing Called Love. When he died, Plimpton said that River “left an indelible mark on [her] soul,” which made me want to hold her hand, and still does. The thing that strikes me most when thinking about River now is that he was only 23 when he died, eight years younger than I am today. He was still sorting himself out, deciding what he loved and needed, whom he loved and needed. I was a mess at 23, bloated from too much beer in college and trying to be a writer with zero success. I had a boyfriend, who is now my husband, but I fear I wasn’t as nice to him then as I should have been.

I hate to think about all the other interesting things River would have done with his life, the performances he would have given, and more important, the man he might have become. Not for me, of course, but for someone equally devoted. He would have made me happy by aging on screen, the two of us getting old together, separated only by space and celluloid. Instead, I keep getting older without him. ♦