Keeping a secret doesn’t make it go away. It just makes it grow and grow until it swallows you whole.

Friday Playlist: Every Day Is Halloween 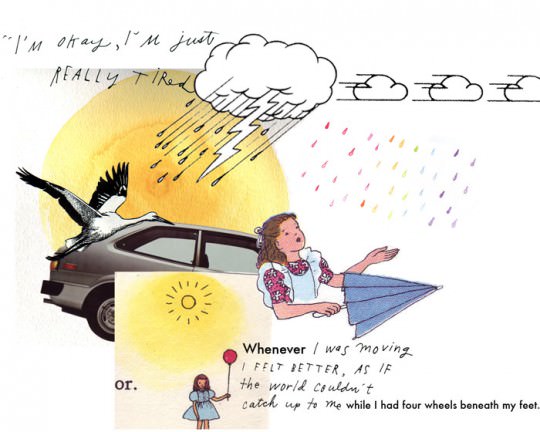 In high school, my best friend with (limited) benefits had a ’94 Honda Civic that he used to 2 Fast 2 Furious with on the weekends, racing up and down the turnpike in between parking-lot cigarettes behind a combination Pizza Hut and Taco Bell. When he wasn’t living life and tasting death or what have you, he was driving me around the back roads so that I could get ice cream, listen to the radio, and try to stop crying.

It was senior year, and I’d spent most of it having panic attacks at his house, sitting on a waterbed and trying to remember to move the oxygen through my body. They came at strange times, set off by a commercial, a song, by nothing at all. One minute I’d be OK, and the next I’d feel like I wanted to tear off my skin and separate myself from my bones. I’d get dizzy, then frightened, then angry, and then I’d cry for about an hour.

The year I got my license was the same year I started feeling tired all the time. It was a tired beyond tired, the kind of exhaustion that makes your entire body ache. I assumed it was the standard summer-to-fall adjustment process: I’d started three-hour swim practices; I was waking up early after a summer of sleeping in; I was staying up late to finish my homework. But as the months wore on and my body adjusted to the changes, the exhaustion seemed to linger elsewhere—in my heart, in my head. I just felt off, as if someone had come along and dimmed the lights a bit. I started to drag, to sense something dark floating around the tiny file cabinets that I’d always imagined lined the inside of my brain. But whenever anyone else seemed to notice the dark thing—a parent, a friend, whoever—I’d always give them the same explanation: “I’m fine. I’m just really tired.” Deep down I knew it was more than that, but part of me believed that if I covered it up well enough, it would eventually go away.

Mental illness is a relentless ghost; no matter how many times I try to exorcise it, it finds a way to make a comeback. I had struggled with OCD in middle school—everything had to be done 11 times, or else—but by some cognitive-behavioral miracle I’d managed to shed my rituals after a year or so of mental torture. I never asked for help. I hid my rituals from everyone, with the exception of my seventh-grade science partner, who must have been born with the best heart in the world, as he never said a word to me or anybody else about the repeated prayers I’d do during our lab time together. I’d spend hours at night reciting special sayings over and over until I got them right, for fear that if I didn’t, terrible things would happen. After about a year of tapping my foot and biting my lip and writing and rewriting my homework 10 times, I finally realized that terrible things happen anyway; my dog died, my perfect grades slipped, my softball team went 0-16, and I was miserable all the time. I forced myself to stop counting. I thought I finally had my brain under control.

I started hiding my depression right away in order to protect my parents. It sounds like a ridiculous idea now, 15 years later, but at the time I thought I could spare them a lot of pain by dealing with mine on my own. I didn’t want them to worry, or to be disappointed in me. I thought if I admitted that I needed help that it meant that I was too weak or too dumb—or worse, too “crazy”—to fix things on my own. I started trying to rationalize the dark thoughts I was having, the behaviors I was engaging in. Everybody gets sad, I thought, though I imagined that not everyone compulsively scratched their arms or fantasized about flinging themselves out of a third-story window.

I tried so hard to beat it, to keep it controlled, to keep it away from everyone else. I put it all in notebooks so that I wouldn’t be tempted to actually talk about it out loud, I kept all of my scratches well-hidden, and blared music in my room when I needed to cry. I pulled A’s in school and smiled when necessary and made sure to wash my face before coming to dinner, so that nobody would know I’d been crying. I faked it so real I was beyond fake, if you will. It was horrible.

Sometimes I have dreams where I’m forced to sit at a movie theater and watch something awful onscreen. I try to close my eyes, but then I realize that I’m dreaming, and my eyes are already closed, and there’s nothing I can do. I try to scream, but no sound comes out. I can try to look away but the terrible thing just keeps playing, and I sit there, unable to stop it, until everything goes black and I finally wake up.

That’s the best way I can describe what it feels like to deal with clinical depression on your own.

During my senior year of high school I drove around my hometown so often that I began to build an affinity for stupid things. I grew attached to the lights at the municipal airport, the seasonal flags everyone hung from their porches, the ugly green electrical boxes that lined the streets. Whenever I was moving, I felt better, as if the world couldn’t catch up to me while I had four wheels beneath my feet.

My best friend and I would drive for hours, him with a cigarette hanging out of his mouth and me with my left hand glued to the radio. We always seemed to end up at Dairy Queen, eating Peanut Buster Parfaits and talking about where we’d be in two years, two months, two hours, two minutes. We decided we’d still be friends. Maybe we’d have sex, or something, since everyone thought we were doing it anyway. Maybe we’d have sex and I’d get pregnant and my parents would kill him and then he’d be a badass ghost. Maybe we’d just build a boat and float away somewhere. Maybe we should get another Peanut Buster Parfait.

“Do you think I’ll always be this fucked up?” I asked him.

Only your best friend can tell you you’re fucked up and mean it in the nicest possible way. You are a mess, but you know, that’s OK, because I still love you.

“I think you just need, like, help,” he said. To know that you need help is one thing. To hear someone say it out loud is another. I realized that I needed someone to give me permission to stop hiding, to admit that I couldn’t do it on my own. I started to cry again, tears of sadness and acceptance and a tiny bit of relief, and he started the car and began to drive.

Here is something to remember about the people who love you: they love you.

It took me a few more months to admit that I needed help. By that time, I’d stopped eating Peanut Buster Parfaits. Unfortunately, I’d stopped eating everything else, as well. I was about a month into my first semester of college when I came home and was promptly taken to a hospital by my parents, who barely recognized me. I was diagnosed with a variety of things, officially, and I finally started getting the help I needed. I apologized over and over again to my parents, for letting them down, for “being so dumb,” for things I can’t even remember now. My parents, in turn, kept apologizing to me. They blamed themselves for missing the signs, for not recognizing how bad it really was. But I was an Oscar-worthy actress: I hid everything so well that I was often in denial of how bad it was myself, until it knocked my heart rate down to 43 bpm and almost killed me.

In the end we realized that nobody is to blame for mental illness. It is not something that people choose to have. Anyone who tells you otherwise is a creep and a liar, and you can tell them I said so.

What I’ve learned over the years is that the people who care for you will not be disappointed in you for having to deal with things beyond your control. They will not think you are “crazy.” They will not think you are weak or stupid for not being able to pull yourself out of it. If you stick out your hand, they will take it. They won’t be able to make all of it go away, either, but they can help you find the path and the professionals that will lead you to brighter places. They will support you. They will listen to you. They will never stop loving you. You don’t have to suffer, and you don’t have to be alone. You’re not the only one, even though it totally feels that way sometimes. I can’t tell you how things will work out, or how long it will take, but I can tell you, from personal experience, that there are lights even at the end of the deepest, darkest tunnels.

I still struggle sometimes; the ghost won’t ever leave me entirely. But I no longer hide what I’m going through, and I am very fortunate to have a team of professional people and a few medications helping me along the way. I’ve learned how to deal with anxiety without trying to cut or starve it away. I’ve learned how to ask for help whenever I need it. I’ve learned how to help myself without spiraling into a black hole. Keeping it a secret doesn’t make it go away. It just makes it grow and grow until it swallows you whole.

My old best friend and I haven’t spoken in years; I don’t know where he is or what he’s doing. We drifted apart during college, separated by state lines and significant others, and now we are slowly fading memories of each other. He is always 17 when I see him. He smells like cigarettes and ice cream. The last time we talked, we were both in a good place. We both had new and totally different plans for two years, two months, two hours, two minutes into the future.

Whenever I drive back to my hometown and see the lights at the municipal airport, I blow a wish in their direction, and hope that he is as happy as I am. ♦