In honor of Halloween (and Candy Day on Rookie), we bring you candy reviews (the first installment in a continuing series).

Something in the Air 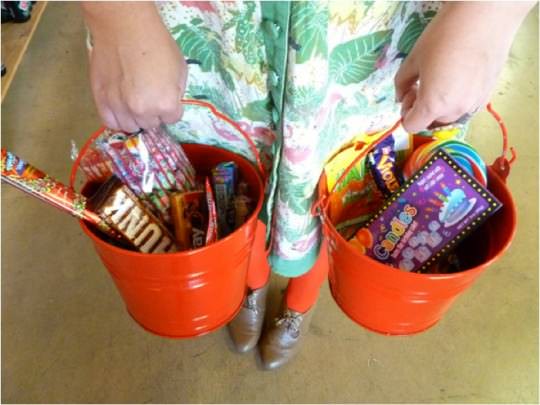 Violet Crumble (Nestlé)
I’ve been wanting to try a Violet Crumble forever. First of all, what a lovely name! It’s chocolate-covered honeycomb and as delicious as you’d think, but the strange, airy-but-crunchy texture makes me think of the girl who ate drywall on My Strange Addiction. Also, there’s no trace of violet, nor is it purple. How puzzling! My period gives this treat two thumbs up. —Marie

SnoCaps (Nestlé)
Proper way to eat SnoCaps (in a theater—these are movie candies only and don’t taste as good if you are anywhere else): Take them two at a time. Lick the bottom of one and screw them together to make a nonpareil sphere. Put in mouth. Be delighted. Extra enjoyment: pour all the loose tiny white sprinkles into your mouth after box is emptied. Do this during the darkest part of the movie, as it is not exactly ladylike. —Elizabeth

Tim Tam (Arnott’s)
Australia gave us Koala Bears, Heath Ledger, and these cookie/chocolate bar hybrids. The best way to eat a Tim Tam is by doing the “Tim Tam Slam”: bite off both ends, and use the cookie as a straw through which to drink coffee or hot chocolate. For maximum effect, I like to freeze the Tim Tams first. Once you suck the coffee through, the Tim Tam will get all melty and delicious. —Anna

16 Candles
These are yogurt balls that are supposed to taste like birthday cake, but the picture on the box looks a lot more fun than the actual candy. They look like cat doo-doo that’s been sitting in the sun. And the texture was more like stale white powdered mini-doughnuts than like cake. Bummer! —Marie

Chocolate Tootsie Pops (Tootsie Roll Industries)
I went to sleepaway camp for five summers. We weren’t allowed to have candy except when we bought it from “canteen,” which was once a week when they turned the room next to the dining hall into a little candy shop and we were allowed like two things each. I always got two Chocolate Tootsie Pops. The lolli part is sort of … grainy? Does that sound unappealing? It shouldn’t. It’s delishus. It’s a Wonkified mystery to me, really, as to how a hard candy tastes like chocolate, but I just accept it and thank Jeebus it’s in my life. After about 10 minutes the shell is thin enough to crunch thru to the Tootsie Roll insides and then you have a crunch mooshapalooza in your mouth and life is beautiful. Bonus, everyone says that if your wrapper has a Native American shooting a star on it, it’s good luck! —Elizabeth

Caramel Apple Pops (Tootsie Roll Industries)
These were my favorite candy in high school. I always had one with me. You really can’t go wrong with one of these guys. I’d offer them to boys I liked and they totally fell in love with me ASAP! MORE LIKE LOVE POTION NO. 9 LOLLIPOPS IF YA ASK ME. —Marie

Maple fudge
In Canada, the mythical land whence I hail, we love maple. We love it so much we put its leaf on our national flag. It makes sense then that our maple fudge is the bomb. Thomas Candies’ fudge, which is made in my hometown of Ottawa, is just as full of flavour-with-a-u as you would expect. Put a little bit on your tongue and let it slowly melt. Hear that? That’s the sound of your life peaking. Nothing you do from now on will ever surpass eating this fudge. —Anna

Reese’s holiday shapes (Hershey)
I don’t even like candy (I know) and I get excited every fall for the annual run of Reese’s SHAPES. They go like this: pumpkins for Halloween, trees for “holidays,” hearts for Valentine’s, and eggs for Easter. These are so much better than a regular Reese’s cup because the ratio of chocolate to peanut butter is skewed a notch more toward that weirdly dry, grainy, supersalty Reese’s peanut butter, which is the best part of a Reese’s, after all. I eat these all winter long then spend the summer awaiting their glorious return at my local Rite Aid. (Whatever you do, don’t buy the really huge versions, which are gross and kind of baffling.) —Anaheed

Creme Egg Twisted (Cadbury)
I’m a seasonal candy purist. To me, certain sweets taste good only if you eat them at the right time of year: candy corn is for Halloween, candy canes can be consumed in December, and Cadbury Creme Eggs are reserved for spring. But then I discovered the Creme Egg Twisted: traditional chocolate bar in shape, but the creamy fondant inside is pure simulated-egg-y goodness. —Anna

Coconut M&M’s (Mars)
When I opened the bag, I got a strong whiff of the islands. When I took a bite, I saw a vision of myself getting a coconut-oil rubdown by a buff hunk in the tropics. I liked these, but I wouldn’t be able to enjoy more than a few, because the coconut is overpowering and what I imagine eating tanning lotion is like. —Marie

Insect candy (Hotlix)
At the candy store I work at, these bugs (and yes, they are real bugs) tend to be sold only for dares and bets. However, dear Rookie readers, I decided it was my journalistic responsibility to tell you what they taste like. First I tried the Sour Cream & Onion Crick-ettes; they didn’t have much flavor, but the crunch of the cricket’s exoskeleton, combined with its legs getting stuck in my teeth, had me gulping down water. The BBQ Larvets (made from worms) fared better (the fact that there were no limbs involved helped), tasting almost like potato chips. The chocolate-covered worms went down easiest. I’m not sure what the rules are for eating bugs when you are a vegetarian like I am, but I probably won’t be incorporating them into my diet anytime soon. —Anna

Chocolate-covered anything
It is a truth universally acknowledged that sooner or later, everything will be available covered in chocolate. Chocolate-covered gummy bears and Jujubes are new twists on old classics, with combinations that sound wrong but taste so right. Super-sweet candies like chocolate-covered cookie dough and brownie dough are perfect if the only cereal available in your house is the boring bran stuff—popping a few of these babies in will make breakfast more interesting. Chocolate-covered ginger chunks are an acquired taste, but once you get used to them you will crave them like mad. —Anna