The more imperfect you are, the less likely I am to lose you.

Secrets of the Top Bunk 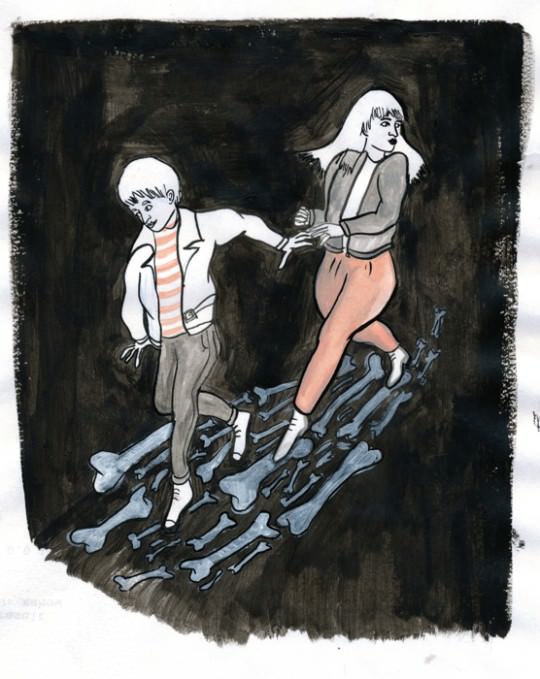 All illustrations by Cynthia

When I come home from school, I want to hurt something and the pinecones I kicked all the way home are not enough. My little brother is standing in the kitchen and he’s holding my purple lighter with all the Christmas stickers right up against his lips. His fingers are all trembly and I rush up the stairs toward him without taking off my shoes, which, in this house, is as deranged and defiant an act as pulling out a samurai sword and going apeshit on the wood furniture.

I take the lighter from my brother and he says to me, “I wasn’t playing around with it all afternoon, I promise,” and I say, “You were playing around with my lighter all afternoon? Why?” and he says, “I wasn’t trying to learn how to use it so that I could burn off my lips,” and I say, “You were trying to burn off your lips?” and he says, “No, I said I wasn’t,” and then he looks down at my shoes and says, “Ooh, I’m gonna tell Mom and Dad you didn’t take off your shoes.”

Right then and there, I don’t feel like being my brother’s first line of defense anymore. I smash the lighter down on the tiled kitchen floors. My Santa Claus sticker splits in two and there are drops of lighter fluid on my brother’s socks. I’m suddenly worried we’re going to light this whole house on fire even though I know I can just take off his socks and put them in the wash, and I know that we’re not going to die right here and right now, but then, the part of me that is always trying to get out, gets out and I feel like I don’t want to be the only one who has to know everything so I say, “This is all your fault,” and shove him, hoping to start a fight, even though I’ve known since the first afternoon my parents left us alone in the house, when he was four and I was 12, that he never fights back. I know this because as soon as my parents drove away, I pulled him away from the window where he was standing and waving to our parents, and slapped him across the face.

The look he gave me when I slapped him wasn’t fear but betrayal, and because I always have to test the limits of everything that I am given, I told my brother to remove his hand from the side of his face I had slapped moments earlier, and he did it because he does everything I’ve ever asked him to do, even if it means letting me slap him in same spot for a second time.

I was so sorry that I couldn’t say anything else but “sorry.”

A few hours later, the wild me I thought I had tamed came rip-roaring back, and I was angry at nothing again. “How come I always have to apologize to you? How come you never say sorry to me?” I held my hand up like I was going to slap him, and he flinched and shielded his cheek with his hand.

“You can be so cruel sometimes,” my friend Izzy said to me around Halloween last year. She was mad at me then, and it all started because I stood her up at the ice cream place downtown to hang out with Leonard, a boy I have loved since I was 14 and he was 16, when I went outside during my lunch period and saw him sitting in the middle of the track field and writing in his notebook.

“Last-minute homework?” I asked him.

I told my friends Abigail and Izzy that every boy in our school was scum except for one, and Abigail asked me why I had to be such a haughty bitch all the time, like why was I such a Debbie Downer about everything, and I said to Abigail that I wasn’t, it just so happened that the truth of the world was its own Debbie Downer, and anyway, it’s important to be picky about boys.

“Not writing poetry is gay,” I said.

Even though last year I was only a sophomore, Mr. Englert, the faculty advisor for our school’s literary journal, made me the managing editor, and I spent an afternoon with Izzy putting up fliers all over the school announcing our next meeting and a call for submissions.

A week later, Leonard showed up to a meeting with leaves in his hair and a strawberry sticker on his face.

This girl, Kathleen Mitchell, who really does have hair that looks as delicate as spun silk, and comes to school wearing full-on tutus and her dad’s old band T-shirts, who is the kind of girl you want to hate if only she weren’t so generous and kind and oblivious to how coveted and hated she is by everyone else, went up to Leonard and asked him what he had on his face.

“It’s a scratch-and-sniff sticker,” he said. “My ex-girlfriend gave it to me.”

“Emily. She’s got that Cleopatra tattoo on her shoulder.”

“Did you guys know Cleopatra was actually really ugly?” I interrupted. “Like worse than Medusa was ugly. She had a huge schnoz and really bad acne. Sorry. I totally crashed your conversation.”

“It’s OK,” said Leonard. “Do you want to smell the best fake strawberries of your life?”

The night before Halloween, Leonard told me he wanted to show me these bones he had found in the forest behind his house. It was the same night I was supposed to meet Izzy downtown for ice cream. I wish I could say it was more of a dilemma for me, but it wasn’t. I chose Leonard. Leonard the near-complete stranger, Leonard the boy who wrote poetry in the middle of the track field. Leonard who let me scratch and sniff his strawberry sticker and looked at me during our lit-mag meeting like I was something to look at. Was I something to look at?

“Are you easily creeped out?” he asked me when he picked me up in his car.

“Yes. I’m afraid of everything.”

When we came to the spot where the bones were, Leonard reached out for my hand. “I think his murderer stalks me in my sleep,” he said.

I shined my flashlight at the tiny skeletal remains that were clearly not human, but we both agreed—without having to say anything—to play along and pretend that a little boy went missing in the woods. We pretended we were looking at something that could potentially rock our teeny tiny world, that we had made this pilgrimage into the woods for a boy who was cruelly taken from the world, because if not for sorcery and make-believe, how else were we supposed to forge a connection that no one could come between, not even God himself—that is if he exists, that is if love exists, and not just any love, but enduring, senseless love that’s worth hurting for.

Izzy is never going to know I think about things like that. She’ll only ever know that I put a boy I barely knew ahead of her, that I raced home after he asked me if I wanted to see some bones, and I took two showers and practiced looking lost and beautiful in front of the mirror.

“I waited a trillion years for you yesterday,” Izzy said to me the next morning.

“Listen, has anyone ever tried to explain the concept of time to you before?”

“Bet you thought about it for zero seconds. I bet you don’t even feel guilty.”

And that was my cue. That was when I was supposed to tell her about Leonard. How I had turned off my flashlight after a little while because it felt dramatic and appropriate. How there wasn’t a moon last night, and in the complete darkness of night, I felt him looking at me, I heard him walking toward me, trampling over what was long dead, and I was longing for him to come closer and he did, and I was longing for him to kiss me and he did. He held my hand on the walk back to his house. I told myself that if he held my hand all the way to his house then he already loved me, and if he let go at any point then he didn’t love me yet, but everything was still possible.

He brought down a glass of ice water and we shared it while lying in his bed, talking about ghosts and the first time we noticed each other.

“I noticed you the first day of high school,” he said. “You were signing up for all these clubs after school.”

“Yeah. I’m like in 12 clubs right now. Sometimes I don’t get to go home until eight or nine.”

“I figured. My friend Johnny and I are in debate club because you get to take trips to Philly, and he has a friend there who gets us acid. We make the trip to Philly to trip in Philly. Get it?”

“Well, except we don’t do it there, obviously. We’d get caught for tripping balls on a school trip.”

“Yeah, have you ever tried it?”

“It’s not scary at all. If you want to do with me, we can do it together, and it won’t be scary at all. We’ll be by each other’s sides the whole time. And when it’s over, you’re never the same again.”

“What if you’re also freaking out?”

“I won’t. I’ve done it enough times that I can control my trips. It’s not scary, I promise.”

“Why were you at the activities thing after school? I feel like I hardly ever see you around after school.”

“My friends and I go every year to eat all the free brownies and cupcakes. We sign up for every club, eat a bunch of chocolate, and go home. I didn’t realize until I saw you there that people actually take that stuff seriously. My friends were like, ‘That girl is so intense.; I watched you stop by every booth and talk with everyone. You looked so determined, and I kept thinking, What’s she so determined to do? You’d talk and talk and talk and then walk away without even taking a cookie.”

I showed him the hole in my shirt that I sometimes hooked my thumb into. “I’m holey,” I said.

“I’m the kind of person who eats my free lunch and then steals someone else’s.” He drank the rest of the water and offered to get some more for me.

“You make me feel stoned.”

“No. I just feel dazed. This feels unreal.”

“I feel shy,” I said to Leonard, because I really did. His lips were icy when we kissed.