We love to hate a mean girl. And we love to love her shoes. Reigned by a beautiful but conniving queen bee with a couple of yes-girls at her side, the mean-girl clique is an essential part of any high school movie worth watching. Despised and envied, they are manicured, accessorized pure evil. But instead of being jealous, let’s take some inspiration from their closets! Stop hating and start emulating! 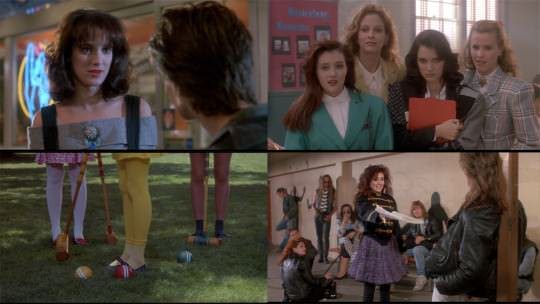 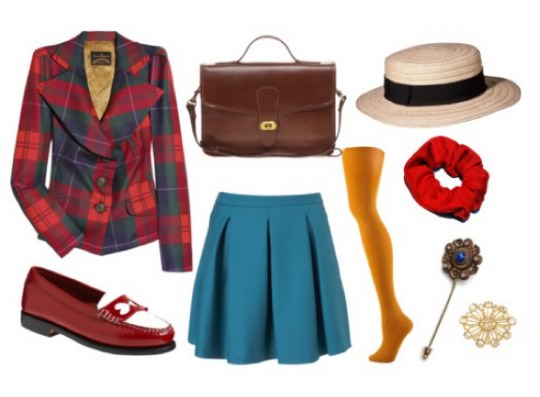 Heathers is the big sister of all mean-girl movies. A preppy clique of girls—three named Heather—dominate through humiliation and hotness, until one of their own, Veronica (Winona Ryder) turns against them. This movie came out during the less-than-subtle fashion era of the ’80s, and there are times when the girls seem to be having a silent competition over who can wield the biggest shoulder pads. There are also scenes where Veronica is feverishly writing in her diary while sporting a monocle! But we don’t have to get too crazy into the ’80s to achieve some of their looks. Colorful plaid blazers, opaque tights and a handful of brooches from the flea market would help anyone capture that Heathers essence. I don’t know about you, but I’m already visualizing myself trampling flower beds (and archenemies) in some of those Bass Loves Rachel Antonoff loafers. 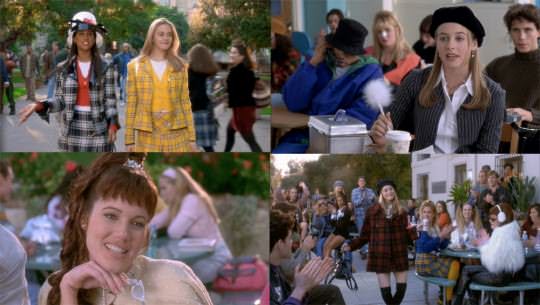 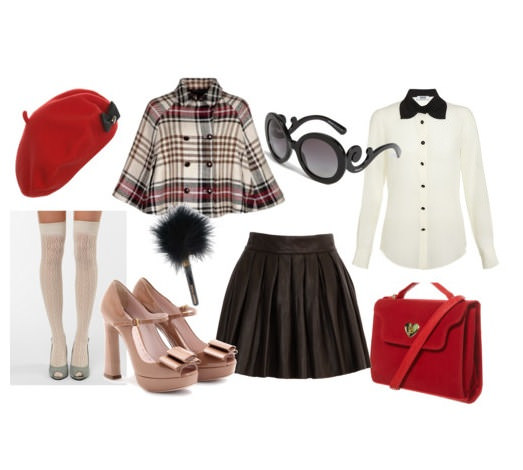 Clueless was the fashion movie of 1995, changing the lives of teenage girls all over, including mine. I even mimicked Cher’s driving-test outfit (and failed the test, like she did), and regularly sported a two-toned argyle vest with matching wingtips. I wouldn’t say that Cher, Dionne, and the snobby Amber top the list of teen movie bitches, but they’re definitely aware of their social status. Favorite quote: “She’s my friend because we both know what it is to have people be jealous of us.” I myself can totally see Amber owning an absurd collection of crazy sunglasses like the Prada Baroque shades. To work some Cher-like ladyswagger, all you need is some cute over-the-knee socks, a collared shirt, and a couple of cropped argyle vests. 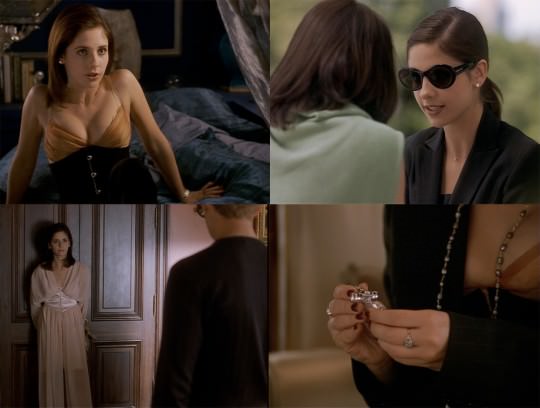 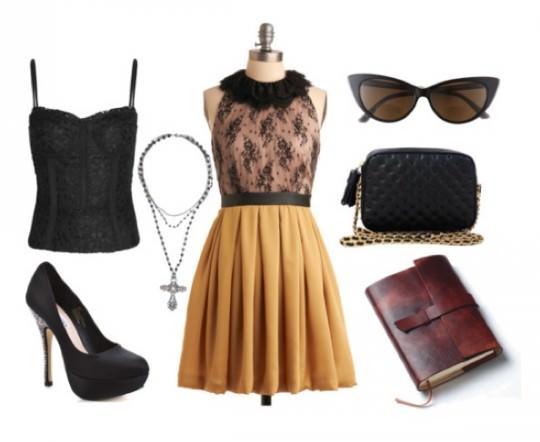 Cruel Intentions has Sarah Michelle Gellar as Kathryn in my favorite type of Sarah Michelle Gellar role: SUPREME BITCH. Although her wardrobe is a bit too sophisticated for my taste (must we wear THAT many black blazers?), I like her attitude toward cleavage, see-through clothing, and brown chola lipstain. She is faithful to simple shades, with all-black everything being her modus operandi. But Kathryn’s most memorable accessory is her rosary, which conceals her coke addiction (not the same as the Diet Coke heads of Heathers). They actually make these rosaries in real life, but since coke is for losers, I’d totally keep Splenda in there instead. 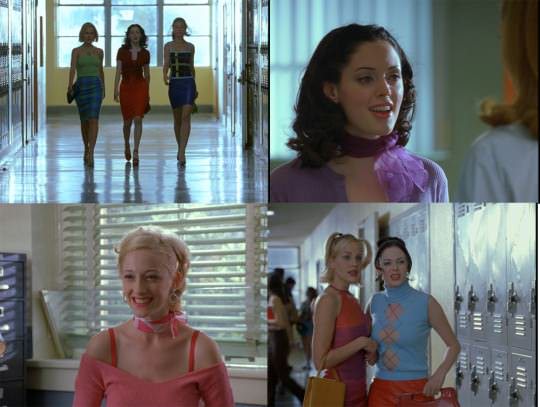 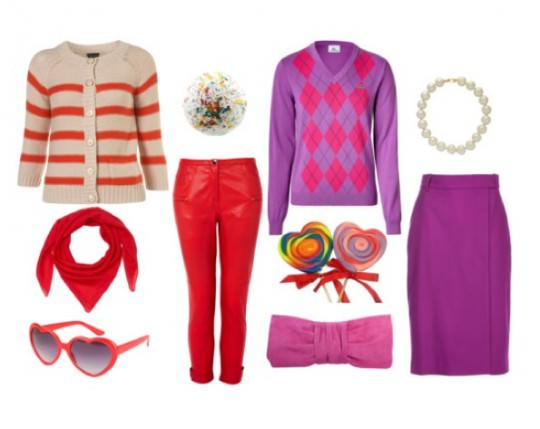 The late ’90s brought a ton of high school-centric films, including Jawbreaker, a murder-themed black comedy similar to Heathers. Instead of the usual alpha-blonde, this clique is ruled by the dark-haired Rose McGowan, who parades the hallways in tight-fitting cardigans, pencil skirts, neck scarves, and cropped pants. There is a nod to candy-colored ’50s style—kind of like a Rizzo-from-Grease vibe. These ladies aren’t afraid to wear the same colors head to toe, and you shouldn’t be either. I love walking around like a giant Crayola myself. Just make sure you don’t shove a jawbreaker down your friend’s throat … unless you catch her talking shit about your outfit. Learn it, live it, love it. 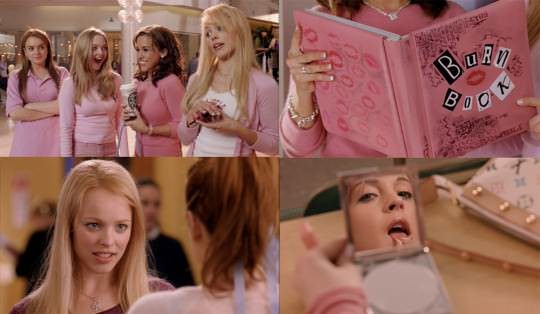 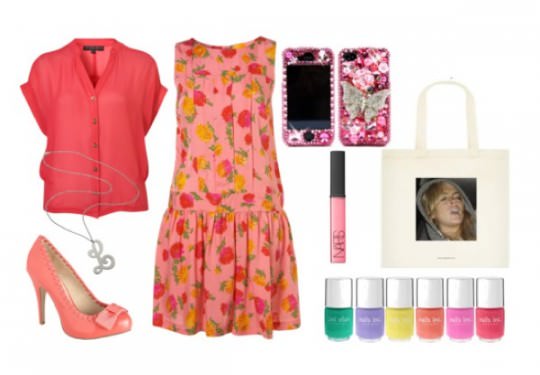 Lindsay Lohan’s swan song, Mean Girls, had memorable characters in its clique, but the Plastics’ style of dress puts me to sleep for days. Slogan baby tees? UGH. Cotton long-sleeved pajama tops? GROSS. I can appreciate a ridiculous set of self-imposed rules when it comes to fashion, like their “always wear pink on Wednesdays” commandment. But the Plastics could have gotten way more creative with that one. And I bet if Regina George had an iPhone, she would have blinged that mutha out kawaii-style and have it match her Burn Book, since they are essentially similar tools, except the phone documents disses via text. We can also take a cue from Lindsay Lohan’s real-life style choices, like her infamous courtroom manicure! All you need is a nail pen to get creative with curse words (and on a fast-track to county jail). You could go a step further and immortalize one of her many tabloid-gold faces … like I did with my custom-made Sleeping Lohan canvas tote. ♦