First Encounters With the Male Gaze

Here’s what the big deal is. 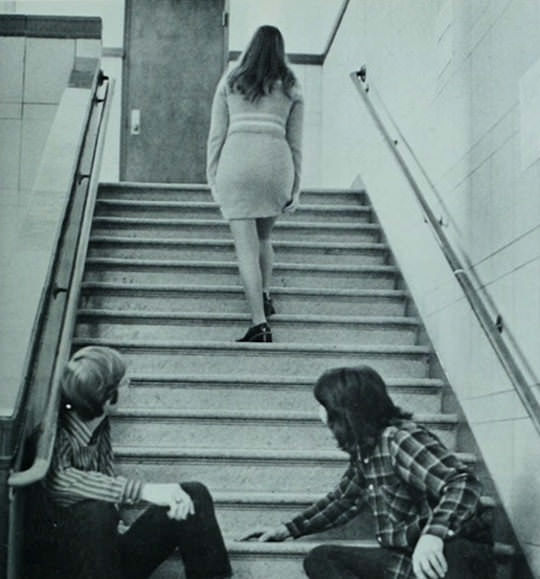 Everyone has a very personal relationship with their body. You live with this thing every day. You grew up with it. It has birthmarks and bruises and acne and battle scars, and holds lots of memories. And perhaps lately you’ve started noticing different things about yourself in the mirror every now and then. It’s not a good or bad thing, it’s just what happens. But still, it’s weird, because it is change, and it does just happen, and without your permission. Which is why it feels so weird when other people start taking notice, also without your permission.

I’m talking about catcalls, and whistles, and comments from passing cars, and hallway touching, and rumors at school, and on Facebook, and Formspring, and another social-networking site that starts with an F. (I just typed in Farts.com BECAUSE THAT IS HOW MY BRAIN WORKS and got distracted from writing this for a really long time.) Sometimes this attention is positive, sometimes it’s negative, and sometimes it’s positive in a way that sounds like a compliment but is just an FYI to you from the deliverer that they apparently have the right to offer their two cents on the state of your body.

Last year, a big, obnoxious, piercing catcall rang through the halls of my high school. A junior guy made a list in which he ranked 50 junior girls and commented on their bodies and alleged sex lives. I say “catcall” because it was not positive attention, though it disguised itself as such, and under pet names like “the amazing bisexual” was this presumptuous entitlement. As if anyone should give a shit that this guy gave their breasts a 7 out of 10.

He posted the list to Facebook and left folders of printed copies all over the school. (Sound familiar?) A mob of students cheered him on as he stood on the main staircase in our lobby, threw out copies of the list to the student body, and yelled, “Women are the future—unless we stop them now!” He didn’t know how shitty what he did was, but he wasn’t innocent. He intended to make girls feel bad by targeting the insecurities and criticisms that come up for them regularly. Too slutty, too prudish, too fat, too skinny. (Thank god, too, cause I was really worried for a while there that our world would soon be destroyed by all these damn women taking over, stomping around in their girly high heels and ruining everything!)

We have a little over 3,000 students at my school, so rumors never make it very far, but man, people were looking for any gossip about this scandal that they could find. That one guy may have written the list, but it took lots of people to pass it around. When it came up in conversation, even months later, after it was in the newspaper, and Jay Leno made a joke about it on his late-night show, there was always one person saying, “I don’t see the big deal. If I’d been on that list, I’d be able to get over it pretty easily.” And that person was always a guy.

I want these guys to know that they’re able to be so cavalier because they don’t hear unsolicited opinions on their bodies and alleged sex lives all the time. Because the changes they noticed in the mirror a year or two ago were not interpreted as permission by strangers to offer an opinion on their bodies. Because they don’t put up with the kind of language the list used on the regular, and didn’t have to see it manifested as some kind of official document or rulebook, shared and spread and broadcast for students and teachers and parents to see. I want these guys to know that of course it would be easy for you to get over, because your transition into puberty didn’t include the same kinds of ridiculous beauty expectations, and then unsolicited evaluations of how well you measured up.

I want the guys who regularly perpetuate the same bullshit that the list was made of to know that, congratulations on your high self-esteem, but you are mistaken if you think anyone is interested in your opinion of their body parts. I want them to know that I don’t have to smile, or react at all, to their backhanded compliments. I want them to know that I don’t exist for them to look at, I don’t get dressed for them, and however I have put myself together on this day—it is not for you.

Most of all, I want to be able to walk around my neighborhood and school without its being assumed that I am looking for feedback on my figure. You know, it really shouldn’t be so complicated.

I don’t know that these wishes of mine will be granted. I’m grateful for organizations like SlutWalk and Hollaback because they respond to these guys in a way that is hard to do in the moment. A few things that work are: “No, I won’t smile, I just found out my entire family was killed in a freak accident,” or “You don’t own this street and no one asked your opinion on my ass.” But I shouldn’t have to have a strategy for preserving my personal space.

The guy who made the list no longer goes to our school. He still comes up in conversation now and then, and there’s always someone who shrugs when it’s brought up, wondering what the big deal was. Recently a guy at our lunch table defended him. Part of me wanted to argue, but I was already tired of the frustration I knew I would soon feel. So were the rest of the girls at our table. We just rolled our eyes and took it in. We’d had plenty of practice. ♦