Literally the Best Thing Ever: One Life to Live

One of the longest relationships of my life is with a TV show that just keeps on giving. 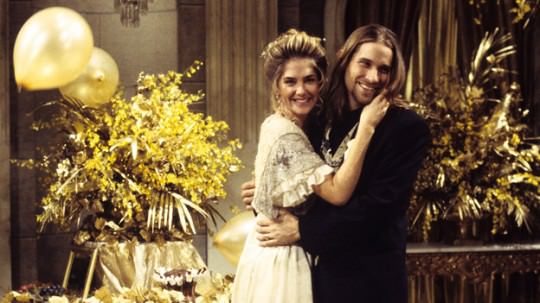 Blair Cramer and the real Todd Manning at their second wedding.

My friends Lila and Jackie got me hooked on One Life to Live the summer before my freshman year of high school. I’ve been watching it for more than half my life now, so I think I can safely say that One Life to Live (or OLTL as we fangirls call it) is literally the best thing ever.

Soaps get a bad rap because they’re sudsy, but that’s what makes them so fun! You gotta love the sheer ridiculousness of Blair Cramer and Todd Manning marrying and divorcing five times (and you also have to root for them every time because obviously they are star-crossed). No one in OLTL’s made-up town of Llanview, Pennsylvania, ever stays married, but no one seems to stay dead either, so you can hold out hope that that car crash that killed your favorite character was not what it seemed. These are all the reasons I need, but if you need more, read on.

One of the best things about OLTL is that it’s more self-aware than your average soap: the characters know how outlandish their situations are. Téa will openly refer to the time “when I was dead.” Kelly will tease her cousin Blair and aunt Dorian about their combined 17 marriages, and Dorian will deadpan that Kelly must be counting annulments. When these things happen I find myself laughing harder than I would during a sitcom.

One Life to Live also weaves in serious storylines that deal with very real issues. For example, I bawled my eyes out in June when Gigi died in her attempt to stop a group of boys from bullying her teenage son, Shane. Shane’s torment and Gigi’s devotion to the child she raised mostly as a single parent were as genuine as it gets. And while daytime TV isn’t known for being culturally progressive, OLTL was the first to show a gay sex scene. (Well, they showed as much as they show with any couple, which is basically people kissing and falling into bed together.)

It’s real life, comedy, romance, and drama rolled into one with characters suffering from amnesia and/or multiple personality disorder, baby switching, and serial killers (but don’t worry, the insanely hot detective John McBain is on the case!) as the icing on the cake. It’s the ultimate in escapist TV and it’s on five days a week, so you can record it and watch it to wind down from school or work like I’ve been doing for years—but sadly you only have until January 20th to do so.

Back in April when ABC announced the cancellation of One Life to Live, I freaked. It was like banning chocolate or canceling baseball. I actually called ABC’s hotline and wrote emails to the network president vowing that I would never watch the station again if they took my show away. OLTL was supposed to be the never-ending story. I always took great comfort in knowing that no matter where I was or what I was going through, I could spend an hour with the Buchanans, Lords, Cramers, and Mannings in Llanview, where divorce and even death never stopped true love and my problems seemed minuscule compared to the latest affair or murder cover-up.

Fortunately, a company called Prospect Park licensed the online rights to OLTL and will begin airing Internet-only episodes in the first quarter of 2012 (and is reportedly shopping the show around to cable networks). While I’m not sure if OLTL’s current cast and schedule will be maintained, I’m glad the show will get a second life, especially because it’s been soooo good lately. I mean, we just found out that Todd Manning was being impersonated by his long-lost, brainwashed twin brother, Victor, for the past eight years and now the real Todd (played by the also insanely hot Roger Howarth) is back, but he’s being accused of Victor’s murder! Seriously, just watch it. I swear it’s THE BEST THING EVER! And Prospect Park, if you’re reading this and need writers, let me know. The only thing that might be better than keeping up with the residents of Llanview would be getting to concoct the trouble that will befall them. ♦

literally the best thing ever one life to live soap operas