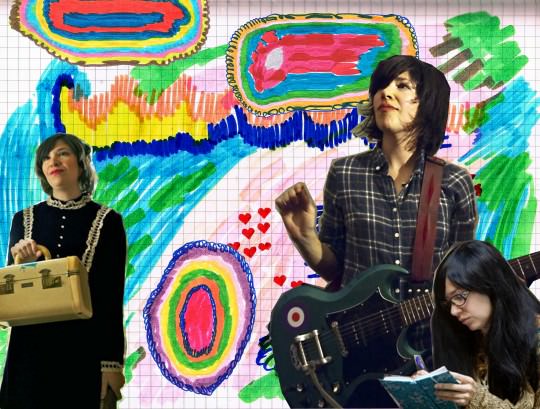 Carrie Brownstein, guitarist of the late great Sleater-Kinney, is now in a new band, Wild Flag, which consists of S-K and Quasi drummer Janet Weiss, Mary Timony of Helium and the Spells on lead guitar, and the Minders’ drummer, Rebecca Cole, on keyboards. This is the best news for anyone like me who already loves any or all of these women’s bands. OMG THIS IS HAPPENING!!

I was able to snag a ticket off Craigslist this past spring to see them at a sold-out, very small venue in Brooklyn, where I took some pics—and bought a 7″ of “Future Crimes/Glass Tambourine” and a T-shirt. 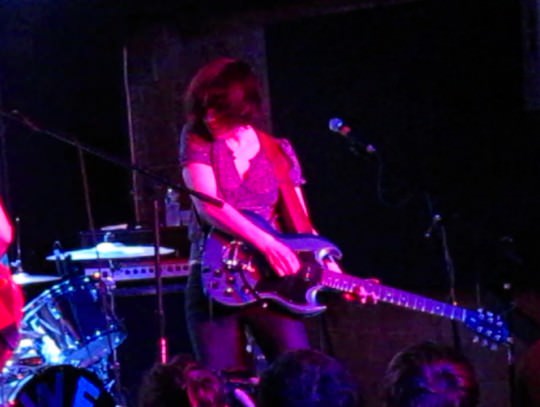 I took this picture of Carrie performing with Wild Flag at the Rock Shop in Brooklyn on March 5, 2011, during the end of the song “Racehorse.”

OLIVIA T.: I just read this piece about maleness being the norm against which all behaviors—and songwriters—are measured. How do you feel about so often having your bands described as “girl bands” instead of just “bands”? Do you feel that it denies your work’s universal appeal?

CARRIE BROWNSTEIN: I’m not offended by the term “girl band,” but I don’t think it’s an accurate descriptor. It’s also lazy journalism. As for the notion of “universal appeal,” I think that’s the antithesis of good art and music. I equate universality with banality.

Can you recommend a couple of albums to our readers?

New? Eleanor Friedberger, Last Summer. Old? There are too many. Here’s one: Slant 6, Soda Pop * Rip Off.

Is there a teen band you’ve heard lately that really blew you away?

QUESTIONNAIRE FOR CARRIE B.: FIRSTS

First style of music that made a difference to you:
Punk. A chemistry teacher gave me the the Jam’s All Mod Cons LP in 10th grade. It changed my life.

First album or 7″ or tape or whatever you bought with your own money:
In high school I spent all of my money at record stores. There was a series of 7″s on K Records by a band called the Go Team (different from the current band the Go! Team). I remember tracking these down as best I could.

First live band or artist or show:
I saw Madonna in fifth grade on her “Like A Virgin” Tour. She played at the Paramount Theatre in Seattle. My other significant first show was Fastbacks/Beat Happening/Mecca Normal at the OK Hotel, which is also in Seattle. I was a sophomore in high school. It was the first time I saw musicians playing music up close.

First song you remember learning all the lyrics to:
As a really young kid it was probably Fleetwood Mac’s “Don’t Stop” or something by the Eagles, like “Heartache Tonight.” Later, I memorized all of the Replacements’ lyrics.

First chorus or guitar riff that you fell in love with:
The B-52s’ “Hero Worship.”

First instrument you owned:
A cherry-red Epiphone copy of a Gibson Stratocaster.

First song you learned to play on guitar:
The Jam, “In the City.”

First song you wrote:
“You Annoy Me.” I was in 10th grade. The lyrics are pretty self-explanatory.

First piece of music writing you were really proud of:
“I Wanna Be Your Joey Ramone.”

First comedian you loved:
David Foley from Kids in the Hall.

First celebrity crush:
Ricky Schroder. I had pictures of him all over my wall and I wrote him letters.

First time sneaking out:
Fifth grade. We smoked cigarettes, kissed boys, and ran around the neighborhood. It was pretty magical.

What is the best book you’ve read about music?

I love anything by Greil Marcus and I like Peter Guralnick’s Last Train to Memphis. Also, Just Kids by Patti Smith is amazing.

You are such a great comic performer on Portlandia. Were there any comedy shows you were obsessed with as a teenager?

I loved Kids in the Hall and watched that show over and over again.


Who is your favorite comedian right now?


Do you have any favorite movies about teens?

Fast Times at Ridgemont High; Mysterious Skin; Dazed and Confused; The Adventures of Sebastian Cole; Me Without You; Ladies and Gentlemen, the Fabulous Stains.


Is there anything that you were really into as a teenager, and still really love today?

Music, obviously. Also, films from the ’30s and ’40s. I was really obsessed with old Hollywood and sort of still am.

I think it’s rad how you don’t limit yourself to one thing. So, what is next? Serious, dramatic acting in big movies? A book?

I have been trying very deliberately to live in the moment. I feel very lucky to be involved with two creative projects that I love (Wild Flag and Portlandia). That being said, I’d like to do more writing for sure. ♦

Wild Flag’s new, self-titled album came out this month on Merge, and they’re touring this fall. Portlandia will be all over IFC next year.