You're My Pop Queen 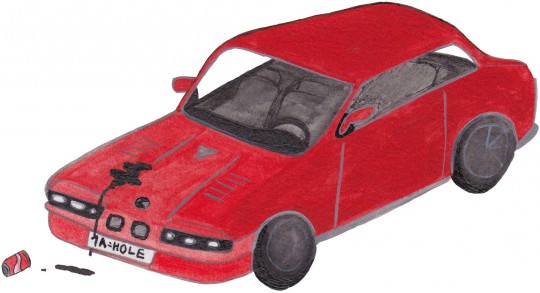 This story begins when Xavier Reed* made an announcement in assembly. My high school was private, a prep school. Most announcements at assembly were about a bake sale or a basketball game, but Xavier Reed took the microphone and said, with complete seriousness, “Someone spilled their Coke on my BMW. If this happens again I’m going to be forced to sue for damages. Keep your hands off my car.”

To understand how angry this made me, you have to know a little bit about Xavier Reed. He was a rich asshole. He made fun of people in mean ways. And he had a history of touching girls at parties when they were drunk or passed out. This was widespread knowledge; older girls told younger girls: watch out for Xavier Reed. He wasn’t a stud, he wasn’t well liked. His power came from being a brute in an Izod shirt. Thinking about it now I imagine he had his share of suffering, but to understand this story it’s important that you feel no sympathy for him.

After assembly I had a free period. Still furious about Xavier’s announcement, I sat and read a book I’d checked out of the school library called Lipstick Traces. Do you know this book? It’s by the music critic Greil Marcus and it’s about revolts and rebellions throughout history. It has a picture of Johnny Rotten on the cover. What exactly did I read? I don’t know, maybe I just stared at the flier for a 1978 Slits show on page 40. Or maybe I read the lyrics to the Wire song on page 73: “I am the fly / I am the fly / I am the fly in the ointment.”

Using a black marker, I made a poster. I went into the library and Xeroxed it, and then, while everyone was in class, I taped it up all over the school. Then I sat and waited. The bell rang; all the kids burst out of their classrooms and toward their lockers. Then they saw the posters. I held my breath and watched them read: 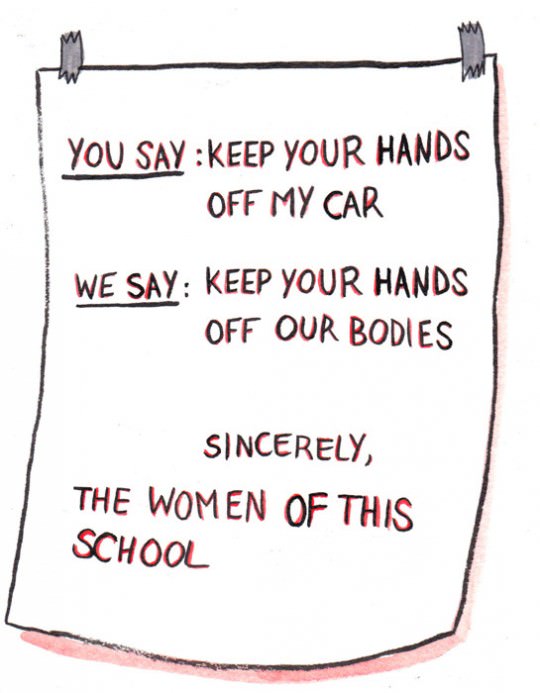 I didn’t have a plan beyond this moment. I wasn’t sure anyone would even get it—who and what I was talking about. But they did. Everyone was whispering and soon there was shouting. Boys were forming factions, taking sides, and some girls were crying. I watched in shock, not sure whom to stand next to or where to look. I had assumed that nothing I said or did could ever have an impact on reality.

Somehow everyone knew it was me. Xavier’s friends let me know I would be killed after school. A sophomore girl told me, in strict confidence, that Xavier had molested her. A girl from my class, a senior, made me promise never to tell anyone that she had had sex with one of our teachers. Everything was so much worse than I had known, it was actually terrifying. I waited for some authority to step in—and they did. I was sent home from school. They said it was for my safety, to protect me from Xavier’s friends. Xavier himself had assured me I would be sued for slander.

When I got back to school everything was smoothed over. The faculty had decided it was best to ignore the outburst. I felt sick. What about all those girls who had told me their secrets with such shame? I couldn’t bear it.

At lunchtime I walked into the headmaster’s office. I put my hand on his telephone (I had a flair for the theatrical) and said, “If you don’t do something, I’ll call all the newspapers and tell them that you have, at very least, a sexual harassment situation here and you aren’t doing anything about it.”

This worked in part because of timing. Sexual harassment was a big new topic in 1992; just a few weeks before there had been an article about it at the local public high school, which is how I’d gotten the idea for my dramatic blackmail.

That Friday we had an extended assembly. Instead of the usual announcements, a group of energetic college students came and taught us about sex. They taught us that no meant no, and what was appropriate behavior for a date. They showed us sexist images from magazines and called them sexist. Some of them were openly gay, and that blew our minds. It was a start.

Right after this I graduated and became a Riot Grrrl, to the tune of: We want revolution, girlstyle, NOOOWW! ♦

* This name has, for obvious reasons, been changed.


Miranda July is a writer, filmmaker, and artist.