Getting Over Girl Hate

How to rid yourself of your resentment and jealousy toward that one girl. 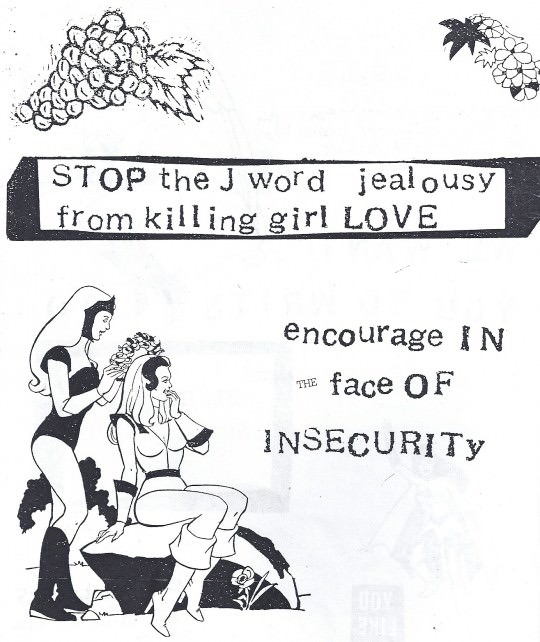 This page from a Bikini Kill zine gets it.

It’s probably someone you don’t know too well—maybe you have mutual friends, or she’s in one of your classes. When you see her or she’s mentioned in conversation, you panic a little on the inside as your mind immediately goes to anything about her that could be at all negative. Find it! Quick! Reassure me of her flaws! Step one is seeing these annoying feelings for what they are: girl hate.

Girl hate is not hating someone who happens to be a girl, it’s hating someone because we’re told that, as girls, we should hate other girls who are as awesome as or more awesome than ourselves. That there can ever only be ONE cool girl, ONE funny girl, ONE smart girl, etc., in a circle of people. This myth has a long history, as I gorgeously scrawled here: 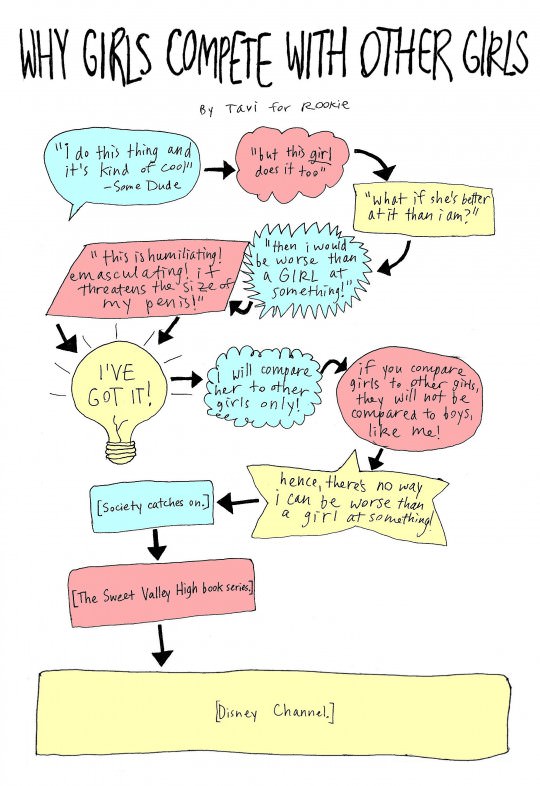 This, along with the myth that other girls are obstacles in your Life Goal of Finding a Man (but that’s a WHOLE other chicken-scratch chart), is why girls compete with one another. THIS SUCKS. The only good thing that has ever come out of this is inspiration for Mean Girls.

The good news is that it’s very handy to know when you’ve internalized a societal problem and turned it into how you feel about people in your life and about yourself. You’re not a sexist pig, you’ve just been raised around a bunch of them in the form of some awful magazines and movies and stuff, where women are always competing for the same man, the same title, where the main character looks over at the other girl with her shiny hair, socializing smilingly with a boy, and feels nothing but resentment. Now that you know that, you can understand how stupid it all is, and differentiate between the girls you hate because you’re told to be jealous and the girls who might actually just not be nice people.

The bad news is that sometimes jealousy is more personal than that, and really does have to do with just you and her. You probably feel a little threatened by her because you two are so similar, but you’re afraid she’s an even better version of you. Here’s the thing—the horribly, eye-rollingly cheesy thing: no one can be a better version of yourself than you. And becoming the best possible example of your you-ness does not include focusing on how much you dislike another person.

2. Realize it has nothing to do with her.

Seriously. Look at her. You barely know this girl. What, you heard she did something slutty at a party two years ago? Two days ago? Who cares! She walks a certain way, answers questions in class a certain way, wears stuff no one else could pull off? Look: confidence is not a crime. It does not mean a girl is a bitch or a slut, or thinks she’s better than you. It just means that she likes herself. And personally, I don’t wanna live in a world where any girl with healthy self-esteem is labeled a whore, or where you have to dislike yourself to be considered a nice person. As long as we’re talking about good ol’ confidence and not being a total self-absorbed dick, I want everyone to be confident and like themselves! Sincerely. People not liking themselves seems to be where their hating other people begins, and that’s when you get a world full of hatred and spite and darkness, and that is why we have to to sing awful songs in music class about loving children and trees and shit. These songs must be stopped. I have very little patience for them.

So get ready to reevaluate your opinion of this girl. Break the habits of looking for any little things she has done that could count against her, quit listening to gossip, stop judging her pictures on Facebook, and start giving her the benefit of the doubt. Remember: these songs, they are awful.

Trust me—you secretly want to be best friends with this girl. Because she’s like you! That’s where the jealousy comes in, remember? I’m close friends with a girl I used to have some serious girl hate for. Recognizing what a wonderful person she is not only made me realize how idiotic I was being before, but it really did make me feel better about myself. Sometimes we can convince ourselves that pointing out flaws in others makes us feel good, but ultimately, those moments of pleasure are fleeting. In the long run, they get you in the habit of looking for flaws in everyone, including yourself.

I’m not saying we all have to be sunshine, lollipops and rainbows all the time. I love my Darias and my Enids and I think a good dose of angst is healthy. But hating people is stressful. Negativity is tiring. Causing drama is dumb. Some people are worth hating, but energy and time and brainpower are too valuable to waste on general shittiness.

4. And above all, maybe the most important thing to keep in mind…

She’s probably insecure about herself, too. We’re all teenagers here. And we’re all going to be insecure no matter what, because whatever hormonal thing is going on inside our bodies (ew, sorry) is so nasty and annoying. It sucks, but it’s why we can find friends and things we love to make it easier. Let’s not make it harder for one another or for ourselves. As Kevin G said, don’t let the hatas stop you from doin’ yo thang. In return, don’t stop anyone else from doing theirs. And if you two happen to share a thang, don’t compete over it. Celebrate it.