For Those About to Rock

How to buy your first electric guitar. 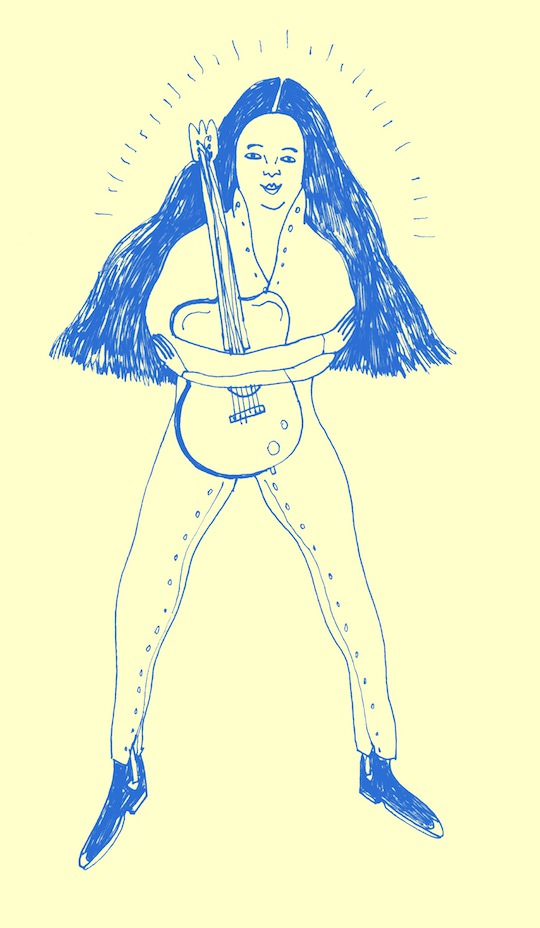 I got my first guitar when I was 15. I found it by calling around to stores and asking for the cheapest guitar they carried. I was in ninth grade and delivered papers for a living, so I wasn’t exactly rolling in cash. A Guitar Center in a distant suburb had one for $90. I didn’t ask what kind it was, since all that mattered was that I could afford it. I didn’t know anything about guitars, anyhow. My dad drove me out there, where I stared at it intensely for two minutes before I purchased it without playing it. I wanted to seem like I knew what I was doing, and was deathly afraid (and too proud) to ask the sales dude questions. I was so nervous about somehow getting it all wrong that I did get it wrong: I walked out with my guitar in my arms like a baby and forgot to buy the cord, picks, strings, strap and case.

Maybe you’re an ice-cold lady of fierce confidence and aren’t shedding a drop of sweat over your trip to the instrument plaza/Guitar Center—but if you are sweating it, when you go to buy your first guitar, don’t freak. Every musician since the beginning of time was, at one point, a beginner. Don’t be ashamed that you don’t know what you are doing yet, even if you walk into the store and the entire guitar department is filled with guys playing insane solos while you aren’t even sure what strings you need. Once you’ve read this post, you will be fully prepared for your first fateful voyage to the guitar shop/music emporium.

Know What You’re Looking For

Beginner guitars, or “child model” guitars, are inexpensive because they are made from cheap, lightweight wood, which is why those guitars tend to have a thin, almost squeaky sound. My favorite guitar is a Teisco child’s model from 1971 that I got in 11th grade. When played on its own through an amp, it sounds like a duck with a cold. When I play it through a distortion pedal or two, it sounds like a very bossy duck—and for this, I love the guitar even more. It’s not the best, but it tries hard, and it’s mine. When I first picked up drums, I went with the cheapest stuff I could get my hands on. You can upgrade from duck-squeak and super-used drumheads later. Learning to play on fancy, new, expensive equipment won’t make you play any better or learn any faster.

When you go shopping for your first guitar, the two things you’re going to be checking for are whether the guitar is playable and that it works. Those sound like they’re the same thing, but playability is really just about making sure the guitar is in good physical shape and that it’s a match for you. Here’s how:

If you are buying a guitar or bass, you should expect there to be a li’l teeny bit of hum or crackle anytime it’s plugged into an amp. More than a little bit is unacceptable. Also bad news: loud buzzing or rattling of any sort. If there is crackling when you turn the knobs, it’s because the pots are dusty, and it’s OK to ask the shop to clean them for you—but do this only if you are actually going to buy that guitar.

Heart’s Nancy Wilson tears it up in a wizard-sleeve dress in 1977.

I’ve bought guitars almost every way you can buy a guitar—from little shops, Guitar Center, garage sales and friends. I actually got my favorite guitar by trading someone a tape recorder and a haircut. There isn’t a single best way or best place to get gear, but there are definitely some good ways and no-ways.

Little independent equipment stores depend on repeat business and keeping a good reputation, so the last thing these shops want is to sell you a bad guitar. There you can find new and used guitars that are in good shape and get help from a salesperson who can really help you find the right guitar, rather than try and sell you as much stuff as you can carry out of the store. Independent stores often have in-store repair, where they can set up (intonate and tune up) your guitar, and may offer lessons. The downside is that they may have a limited selection (rather than dozens and dozens of guitars, like in a chain store)—but they do often have beginner deals on all the equipment you need to get started.

Guitar Center, Sam Ash and other national chains are also good places to start, since they carry a big selection of beginner guitars. You can try out a bunch and see what you like. They always have beginner’s package deals, where you get a whole setup (guitar, amp, case, strap and cable) for one price. Another advantage is that they carry everything you need, and they’re usually cheaper than any other store around.

Buying equipment on eBay is not a smart idea until you know a lot about gear—it’s too easy to wind up with junk. Getting gear through Craigslist or ads is a better bet, but still you have to know what to look out for—only do this if you have someone who really knows guitars and gear helping you shop. You can buy gear at a pawnshop, but that’s kind of like going to a library to buy a hammer. A pawnshop is not in the music-equipment business. Sure, they sell amps and saxophones, but they also sell pearl necklaces and power drills. The people working there may not know about the instruments they are selling; they might not know whether it works properly or if it’s the right guitar for you. Ads, eBay and pawnshops are methods for experienced players and buyers, which you will be in a few years, but it’s not where you should start.

Wal-Mart, Target, and warehouse stores like Kohl’s or Sam’s Club also often carry guitars and other musical equipment for cheap. Some of the instruments they sell are toys, however, so just make sure you know the difference—and that you’re getting something that’s suitable for playing in a band. If you’re not sure, ask—and if there aren’t any experts on the scene (not too likely in a nonspecialty store), check where the guitar was made. Most major brands have a couple of different levels of quality that can be judged by where an instrument was manufactured. If it’s from Mexico or Asia, it’s generally of a lesser quality. If it’s made in America, it’ll have better electronics and wood.

The standard first buyers’ guitars are the Fender Squier and the Epiphone Junior, which cost about $100 each. Daisy Rock, Dean and Ibanez are brands with a couple of different types of beginner guitars for under $200. New guitars have a one- to five-year warranty, but nicer ones may come with a lifetime warranty. A warranty is important: it means that if something in your guitar is defective or fries out, the guitar company pays for it to be fixed—not you. At Guitar Center, used starter guitars are only $20 to $30 less than the brand-new versions, and you’ll still have to pay a little extra for a warranty—so buying used can cost the same as new.

With a used guitar, there are the same advantages and problems as when you buy anything secondhand. It might be a deal, but you can’t return it to the garage sale where you got it if it’s defective. If you are buying used, get it from a source you can trust—a store, a friend, a friend of a friend, your neighbor’s sister—someone who is not likely to sell you something that’s half broken.

It’s easy to say “don’t be intimidated!”—but really, don’t be. Every one of your rock idols, at one point, was a total newbie dawdling in the aisles of the guitar store and trying to make their clumsy fingers make that magic E-chord. Buying your first guitar and starting your first band are the beginnings of your life as a musician. However you are doing it, however you are figuring it out, is exactly the right way. Good luck! ♦

Jessica Hopper is a writer who lives in Chicago. She started her first band in ninth grade; it consisted of Jessica on guitar and her best friend yelling passages from the “It Happened To Me” section of Seventeen magazine.

This piece was adapted (but mostly just ripped directly) from Jessica’s book The Girls’ Guide to Rocking: How to Start a Band, Book Gigs and Get Rolling to Rock Stardom (Workman Publishing).