Ten years after the fact, Jenny interviews the first boy she ever smooched. 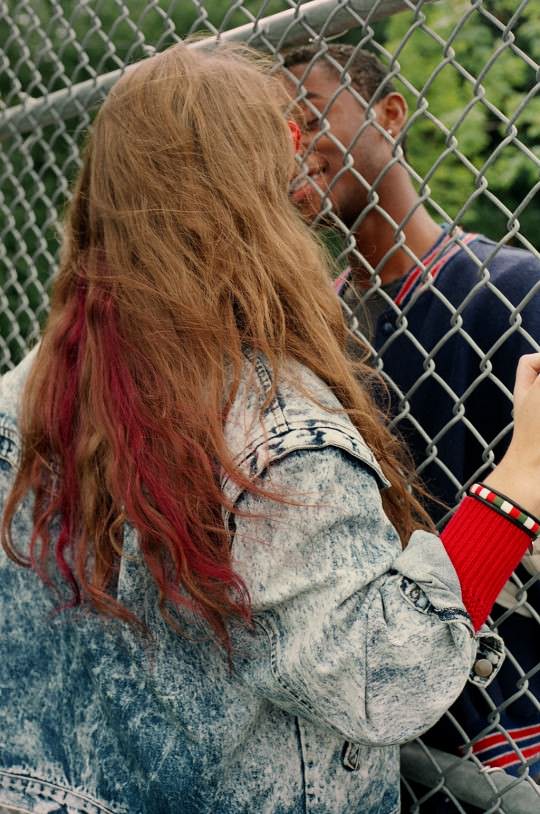 All images by Petra

When I was 15, I went around school in my mom’s old dresses and platform PVC combat boots that I had begged my parents to order for me from the Delia’s catalog. I wrote poetry about dying in the suburbs and was convinced there had never existed a teenager more misunderstood than me.

It was hardly a surprise when I became infatuated with my friend Chris’s older brother, Pete. He was two grades ahead of me, wore T-shirts that said “Fuck White Supremacy,” made me a mixtape titled “Punk Rock 101,” had friends who made zines about feminism and went to shows in the city, got me into Billy Bragg and Bikini Kill, quoted from The Dharma Bums before I had cracked open On the Road, had an encyclopedic knowledge of radical progressive movements when I was still trying to articulate why I was pro-choice, argued beautifully against the sanctions in Iraq, wrote impenetrable poetry that referenced Moby Dick, and sometimes gazed at me in a way that I described in my diary as “so intense I could DIE!!!!!”

The next year, Pete went away to college in the Bronx, and I started my junior year of high school even more crotchety and disenchanted than I was the year before. I started writing him long, painfully loving emails and assaulting him with my irresistible wit over late-night sessions of AOL Instant Messenger. Looking back over these emails, I’m pretty pleased to find that while there was a good amount of LOVE ME LOVE ME LOVE ME, I also wrote about stuff that really mattered to me. Like how starved I was for any kind of artistic/intellectual/creative action. How badly I wanted to be part of a community of people who inspired and challenged me. Or how in high school, it seemed like your only choices were to be either someone who was obsessed with getting perfect grades, or someone who didn’t give a shit. Where were the people who just wanted to learn new things and be exposed to everything there was? I wrote to him about my family and how they didn’t want me to write. I wrote about how badly I wanted to be a writer and how scared I was of finding out that I sucked big time.

At 16, while I believed I was interesting and funny, it seemed crazy that anyone else would. So when Pete came back to Long Island for the holidays and asked me if I wanted to meet him in front of the elementary school, I was shocked. I remember shakily waiting for my parents to go to sleep before sneaking out the back door, cutting through the woods behind my house, and running across the elementary school playground toward his car. Is it possible? I wondered as I sprinted across the grassy field. Can Pete possibly like me?

He was the first boy I ever like-liked and that night he became the first I ever kiss-kissed. Pete goes by Peter now. He’s a Ph.D. candidate in history, and I’m still writing poems about the boys I’ve loved and love. I caught up with him on the phone to ask him what he remembered about our first kiss. Ten years later and he’s still every bit the dreamboat he was in high school. 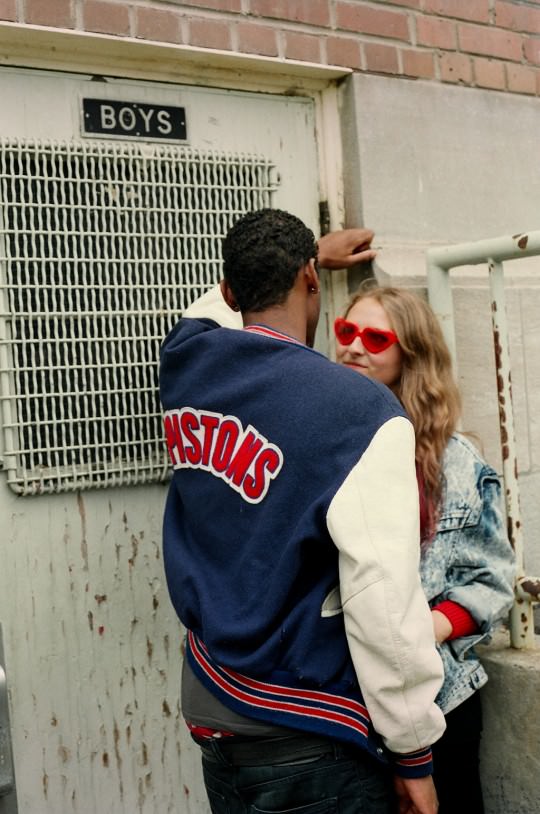 JENNY: Are you ready to do this?

JENNY: Can you tell me what you think you were like in high school?

PETER: Misunderstood is the word we all used, I think, looking back on it with some self-deprecation. Adolescence is an awkward time for anyone. I think after [I read James] Joyce I saw myself as Stephen Dedalus, like any romantic kid with literary aspirations. And I had tried and failed every sport known to man, so the arts seemed a natural refuge for my teenage misanthropy.

JENNY: Do you remember the first time you noticed me?

PETER: You were hanging out with Malgorzata. That was the first time I took notice of you physically. And because you were friends with Malgorzata, I thought you were probably a little different and that made me interested. I learned at some point that you were this literary genius who was the star of your class. So I was drawn to your tortured genius, of course.

JENNY: I don’t know about that…

PETER: Especially since I imagined myself as a quiet, tortured genius.

PETER: I think we did like a Jordan Catalano–Angela Chase thing. We noticed each other.

JENNY: Do you remember anything about the first time we kissed? Where were we and what were we doing? I’m thinking it was at Prybil Beach.

PETER: Were we in the car when it happened or were we on the beach?

JENNY: I vaguely remember leaning against the hood of your car. But maybe I’m just openly fantasizing.

PETER: That was probably it … I remember you were very cutely shy about the kiss. You were a sweet kisser. You were … I don’t know how to describe it. You were …

PETER: You were soft. You weren’t jumping on top of me or anything. It was more awkward than that. 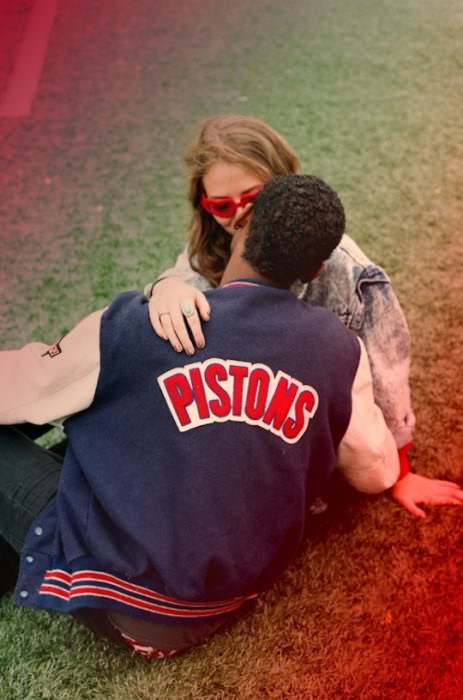 JENNY: I don’t know if you know this, but earlier that same day, I had pecked another boy on the lips. It was this kid who had a crush on me in high school. We went to Morgan Park and very awkwardly embraced and he very awkwardly asked me to be his girlfriend and I just said yes because I was super passive back then. And then I came home and started chatting with you on AOL Instant Messenger or something, and you asked me if I wanted to go for a ride in your car, and I immediately messaged the boy I had embraced in the park earlier and was like, “Um, I’m calling this whole thing off. I just want to be friends,” and then dashed off to meet you. I think that was the same night we ended up kissing on the beach. I don’t know if I ever told you that.

PETER: You crushed this poor boy’s hopes and dreams.

JENNY: I was a jerk.

PETER: What a heartbreaker you were. Having your first kiss and leaving a trail of broken hearts behind you.

JENNY: Yeah, so calculating, already. How many times do you think we’ve kissed each other?

JENNY: Just throw out a number.

PETER: Maybe a hundred times? How do we distinguish between one night and one kiss? I don’t know how we break that up mathematically. A lot of times.

JENNY: What do you do now? Do you think you are the person you thought you would be in high school?

PETER: Yeah, I think I turned out the way I expected. I have my self-criticism, of course. But I’m finishing a Ph.D., and hoping to use it to write. The road has been very unexpected and circuitous, and not without some regrets, but I think I’m generally about where I expected to end up.

JENNY: Is there a part of you that’s still the punk heartthrob I thought you were in high school?

PETER: Oh man. You know, I hope so. I’ve largely abandoned the music, beyond nostalgia—apologies to Kathleen Hanna—and I dress more bourgeois and suburban than I could have admired back then, but in social and political thought I’d like to think I’ve kept the rebelliousness against conformity and conservatism that first attracted me to that scene. The anti-conformists can also be just as herd-like and fashion-obsessed as the crowd … but I still light up like a kid on Christmas morning whenever I hear a Dead Kennedys song …

JENNY: What kind of lady do you think I’ve become since high school?

PETER: You turned out the way I had hoped you’d turn out. You’re still pursuing dreams, like I am, and that’s difficult to do. It takes a lot of courage. Neither of us is very bold or aggressive, but I think you’ve made a bold choice by trying to be a writer. And you’ve been really successful and kept at it. I like who you’ve become.

JENNY: That’s really sweet. [Dies a little bit inside with renewed love.] Do you think we’ll ever kiss again someday?

JENNY: All right. Thanks for answering all of my questions even though they were kind of embarrassing.