Doing It on Television 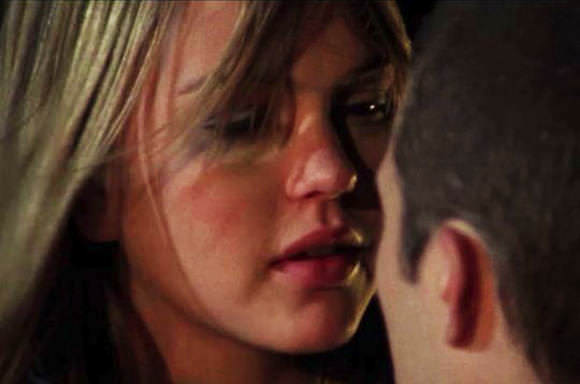 Julie Taylor deciding to have sex with Matt Saracen on Friday Night Lights.

When I was still light years away from losing my virginity, I watched Brenda Walsh do it on Beverly Hills, 90210. I didn’t actually watch her have sex, of course. I watched her get ready for West Beverly High’s Spring Dance, and I watched her discover that she and her best friend had accidentally bought the same dress, and then I watched Brenda and Dylan sneak out of the dance and go up to a hotel room. They kiss, Dylan whisper-talks, Brenda makes her sideways-faces, and then he throws her over his shoulder and carries her closer to the bed. Not all the way onto the bed, mind you, just closer to it. The next scene shows Brenda and Dylan straightening themselves up to go back to the dance, the deed done. Ah, I thought to myself at the time, that is how it happens. The whole transaction seemed nicely tidy, with only the faintest whiff of danger. (After all, Dylan was a recovering alcoholic, and had those sideburns, not to mention that eerily potent receding hairline.)

When I was 10, and watching Brenda and Dylan’s love story unfold on air, I wondered if this was the kind of experience I’d have—a rich boyfriend with a hotel key. It seemed like an appealing option, the same way that being a princess seemed like a totally viable career for me at the time. We know that Dylan has slept around, and that Brenda hasn’t, but we also know that he really loves her, and that he’s not going to brag about it to his friends or make fun of her or ignore her in school the next day. These are all real possibilities.

Another very real possibility is that you don’t have any sex at all during your high school years, as I didn’t. Going to college a virgin is a whole different cupcake. Suddenly, what was seen as a virtue in high school (see Brenda’s wide-eyed desire to please) was my albatross, my embarrassing personal truth, like halitosis, or being raised by a cult. Most (almost all, very nearly all) of my friends had made the jump from sweet, romantic double-devirginating relationships to quicker, more casual ones. Instead of talking endlessly about doing it for the first time, I talked to my friends about how they were doing it on the fly, like the storied college girls of ’80s movies, with boys they’d just met. Now, I don’t want to paint myself as a purity-ring-and-cold-shower kind of girl. During high school and college, while still a virgin, I made out with boys in strangers’ bathrooms as well as in my bed. I did so on a regular basis, with zero feelings of guilt or compunction. A few times, I made out with more than one boy in a single day. It was the same behavior that branded me a slut during middle school, because I had French-kissed my boyfriend. But I had still never had sex.

At the time, I thought it was because the right person hadn’t presented himself, with a red sports car waiting outside my sister’s wedding, like in Sixteen Candles, or with the kind of easygoing assurance that my first real college boyfriend showed a couple of years later, when he unselfconsciously kissed me in front of all my friends, the morning after our first encounter. Looking back, it is more and more clear to me that the cause of the delay wasn’t that I wasn’t ready to have sex, but that I wasn’t ready to be that naked, emotionally. When I did finally start doing it, it was with a guy who I don’t think ever particularly liked me, and it only happened a few times. He was handsome, and smart, and not the guy for me in any sense. It would be like if Brenda lost her virginity to Rick during the summer that she and Donna were in Paris, all the while keeping up her fake French accent. I feel a little bit strange that I have to drag that college boy into this at all, but there you go—if nothing else, having sex with someone for the first time cements them into your personal narrative as much as your first kiss, no matter how much you might like to take a pair of craft scissors and cut them out of the picture.

Of course, sometimes the romance of television does get it right. More recently, Friday Night Lights gave us the relationship between Matt Saracen and Julie Taylor, the coach’s daughter. Matt has just been demoted from his position as quarterback of the Dillon Panthers. He and Julie blow off the school dance (the idea of dancing does seem to lead to fornication, one point to John Lithgow in Footloose) to go to a nearby lake, where they swim and argue over which is better, veggie hot dogs or the regular kind. They tumble backwards off their campfire perch and onto a blanket, kissing like mad. The next scene shows them staring at each other in the car the following morning, completely in awe of what has occurred. Julie runs inside, wearing Matt’s sweatshirt, and looks at herself in the mirror for a moment before shaking her head at her own reflection, as though she cannot believe it herself.

The mechanics of sex—and of learning about sex—are so messy, so personal and ultimately so human that they would be impossible to depict on network television. No one would want to squirm through an hour of two pretend 16-year-olds sorting out how their bodies work, in real time, with all the discomfort and trial-and-error that such exploration would entail. That would be more awkward to watch than a whole season of Curb Your Enthusiasm. Friday Night Lights come closer to the fantasy—that is, to my retroactive fantasy of how I wish I had had sex for the first time. Gone are Brenda’s up-dos, the pantyhose, the rented tux. Instead, Matt and Julie look a little tired, slightly bedraggled. They are two actual people, in an actual relationship. This was the part that I misunderstood while watching Brenda and Dylan. Though the sets were glossier (it was supposed to be Beverly Hills, after all) the emotions are supposed to be the same.

The episode wherein Brenda lost her virginity was the season finale. Sure, other things happened that night—Kelly was voted Spring Princess, Steve told Brandon that he was adopted—but the momentum had been building all season for Brenda and Dylan’s lovemaking session in the hotel room. When Matt and Julie have sex, it’s only a tiny side plot, with the whole town and school still going about their business. The world continues, as if nothing has happened, as if the universe is exactly the same. But when we see Matt and Julie smile at each other across the church pews that Sunday, these gorgeous, sweet, secret smiles, we know that the universe has, if only for them, been forever changed.

Had I been bold or bare enough to talk about my nerves and excitement with another person, to be that vulnerable, I might have made those sweet faces, too. Like Matt and Julie, I felt like the world had changed—but only for me. In the end, it was enough. ♦