Where we answer your questions with only a little more sophistication than the good people of Yahoo! Answers. 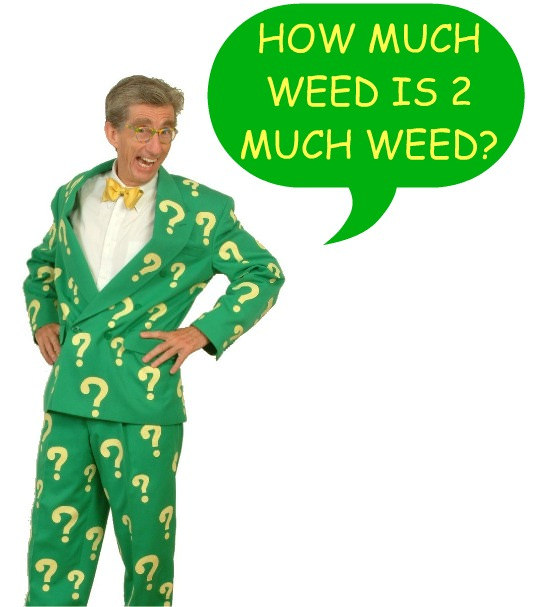 How much weed is 2 much weed? —Anonymous

Well, if you have to ask…

Ever hear the term “everything in moderation”? I think weed is included in that category. I guess it would depend on how an individual might define
“moderation.” But I don’t really know the answer. I think if you smoke weed and it affects your work, relationships, ability to move, memory, psychology or social skills, then you’re smoking too much. Some try weed once and it’s a nightmare of paranoia and tears, and they should probably smoke zero weed. Others smoke numerous times a day every day and lead perfectly happy, functional lives. I’d say there is no authority on what, for any given person, is too much. But have you ever heard someone say, “You need to smoke more weed, you don’t smoke enough?” Not really, only the opposite. So in this case, less is probably a good idea. Especially if you’re under, let’s say, 18, and your brain is still growing and developing. My personal preference in that case is as little weed as possible, but you’re probably not gonna listen to me. And again, if you have to ask, then you probably already know the answer yourself.


How do you kiss? What are tongues supposed to do? —Anonymous

The lean-in should be at an angle, but it doesn’t matter which way you tilt your head. (Eventually you’ll alternate—try switching directions when it’s time to take a breath.) Coming in straight on, at least at first, makes it too easy to bonk noses or clash teeth. These run-ins are bound to happen anyway, but just giggle and keep going. That part doesn’t usually make the movies, but in real life it might lighten the mood. Just kiss your partner on the cheek, smile and start again.

Once the lips actually touch, it’s like dancing, but not like dancing for a normal person—dancing like you were born knowing how to dance and were already super good at it. Fit your lips together like Tetris blocks, every which way, puckering your lips and releasing until you find a rhythm. If one way doesn’t work, just adjust. No one is going to take kissing privileges away from you, and since they’ve already agreed to kiss you, your special friend is bound to be understanding. You get unlimited tries!

Tongues! Ew. (But also, wow!) Don’t lead with your tongue, because you’re not trying to lick their face. But once your lips are waltzing together, you can gradually open your mouth wider to indicate it might be time for your tongues to touch. If you’ve made it this far: CONGRATULATIONS, you’re making out. Now, with your tongue, you can cross the threshold of your own chompers. Feel free to go slow at first to keep your spit in control—there’s plenty of time and no one likes a slobberer.

BUT! The only thing worse than a Too-Much-Tonguer is a Total-Tongue-Hider. Making out with no tongue is like eating a Blow Pop wherein you never get to the gum: it’s still a lollipop, so it’s pretty good, but you probably want the soft inside part, too. Maybe you’re like a Sour Apple (tons of tongue flavor) but your partner is more of a Cherry (less out there, just the basics). The only way to know is to try. Flavors can mix!

Present them with yours and if they greet you back, keep sharing. You can graze or wrestle, even gently bite or pull your tongue back altogether. Part of the reason people can kiss for so long is that you can switch styles, speeds, directions and it’s still good.

Better than the Blow Pop gum, the flavor doesn’t fade in two minutes. And never mind what they say on TV—it doesn’t get stuck in your braces either.


None of my “friends” know who I am. Personality, I mean. They see me as whoever they want me to be. I feel empty because of it. What do I do? —Anonymous

Oy, this! I hate this. It’s pretty common for people to be so caught up in their own lives that they cannot, for the life of them, bother to notice others. It sucks and is awful. But let us not discuss how much it sucks! Instead, let’s discuss what I am hearing, in your question: you are very keyed in to what your friends think of you. Maybe too keyed in. If they don’t see who you are, you start to feel “empty,” as if you don’t exist. And this, to me, indicates that you are giving too much power to your friends.

Everybody wants to be liked. One of the easiest and most convenient ways to do that is just to reflect your environment; you’re into music with the musicians, you talk about dating with the friends who do the date-talk, you’re a sci-fi nerd with the sci-fi nerds. Etcetera, etcetera. I was all about this, at a certain point in my life. And there was a pretty obvious reason for that: I did not like myself. I had absorbed the message that, whoever I was, I wasn’t worth people’s time or care, and that the only way to “fool” anyone into thinking otherwise was to imitate other, better people. The sad part? All the people around me had gotten the same message. Especially the girls. So we had an entire world built around trying to reflect one another, and seeing ourselves only as reflected in one another, and … have you ever seen a mirror reflecting a mirror? It’s not that interesting. It’s just a whole lot of shiny, empty space.

This is a really crappy way to live. It results in shallow, empty relationships. It results in having dozens of friends, and feeling lonely every time you hang out. Fortunately, the solution is simple (if not exactly easy): You figure out who you are, and you share it fearlessly.

Do you have a journal? Get a journal. Write in it, until you figure out which topics fascinate you. Then, start conversations about them, and see who takes up the challenge. Make a list of all the weird interests you have—English folk music! Woodworking! Screen-printing your own T-shirts! Whatever!—and then figure out why you like those things, and how you can get really knowledgeable or skilled when it comes to at least one of them. Then, tell everyone about how much fun you are having, with your woodworking and such. Your friend-sorting process begins here.

Some people are going to be all, “Ugh, you build cabinets?” These are not the friends you need. Toss ’em. Some people are going to be all, “Whoa! I don’t know anyone else who can build such awesome cabinets! Good for you!” These are real friends. Keep them. And then, unbelievably but inevitably, someone is going to share with you the fact that they are building their very own spice rack, and you are going to have someone who shares this “weird,” previously lonely portion of your life. In fact, you are going to draw all sorts of new people to you. People who do not NEED to project a convenient personality onto you, because they are really into the personality that you have RIGHT NOW. Which has been your goal all along.

Don’t get me wrong: You’re always going to relate to most people with only a portion of your full self. Only very rare and very good friends can handle absolute, unfiltered honesty. But as you get more comfortable and honest in your relationships, you’re going to create an environment in which comfort and honesty are acceptable. And at that point, your friends are going to start relating to you in a new way. And you are probably going to find out something shocking: you weren’t seeing the “real them,” either. And they’re happier to know you, now that it’s OK to be themselves.


Why is conformity the norm and why are we labeled “indie” or “hipster” when being ourselves (and passionate about what we truly love)? —Tara, Los Angeles

I’ve been called a hipster what seems like a thousand times. My peers are often quick to label my tastes in music or movies as “indie” even when those things really aren’t independently produced. Sometimes it seems like I’m known more as a hipster and, well, less as an actual person. Why? Why am I, and so many other people like Tara, instantly deemed hipsters for honestly just loving something and being ourselves? The answer is simple: people are threatened by difference.

Conformity is easy. Liking what everyone else likes is safe and cozy. To step outside the prevailing culture is scary for some people. Not to mention that liking something that other people don’t like doesn’t make you very popular. If you want to be popular and likeable, the easiest way to do that is to like what the popular people like, which is usually not too risky, or weird, or … interesting. Some of that stuff is great (I unabashedly love Justin Bieber, iCarly, and Hot Topic), and having predictable, middle-of-the-road tastes isn’t necessarily a bad thing. But if that’s all you like, it might mean you’re afraid to step out of line and truly express yourself by loving something that might be different.

That’s why when a lot of people encounter someone like you, who is expressing herself and being passionate about what she loves, they call that person a hipster. Because they hate your freedom! So they put you down. They accuse you of trying too hard to be different, to be “indie.” Why do they think you’re trying too hard? Why can’t they accept that you love what you love effortlessly? Isn’t that silly? People throw the hipster label onto others whom they’re jealous of or threatened by, or, sometimes, when they’re genuinely intrigued by a person’s uniqueness.

Sometimes people use the word hipster in a neutral or even complimentary way—to describe someone as artsy, quirky, cool or generally into independent films and music. That’s right, sometimes “indie” and “hipster” have their bright side! A friend once told me, “I like being called a hipster. I take it as a compliment. It means I’m different!”

So, Tara, and all teenagers who face this problem, you can choose to either embrace or ignore those who call you a hipster. The important thing is that you know you’re unique, and effortlessly so. You love what you love because you love it, simple as that!

If you have a question for a future edition of Just Wondering, please send it to [email protected].