For Those About to Rock 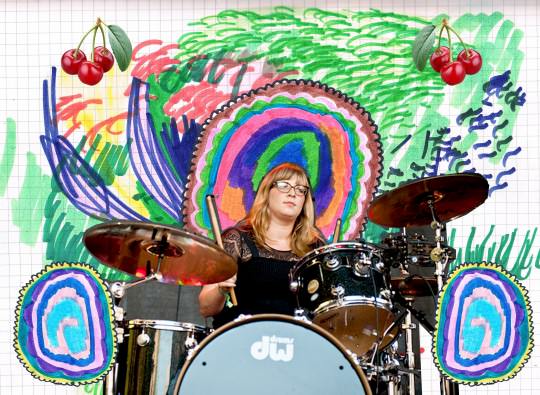 I first noticed Ali Koehler several years ago, when she was drumming for the Brooklyn lo-fi punk band Vivian Girls. Last year she left that band to play with Best Coast, the laid-back California outfit led by the cat aficionado and genius Bethany Cosentino. That’s when I really fell in love with Ali’s playing. Those two bands are so different musically (Vivian Girls are best listened to in your bedroom, playing air guitar; Best Coast is great on a lazy summer car ride), but Ali is some kind of crazy percussion chameleon, capturing the spirit of both of them equally well.

I had this conversation with her over email just last week.

ANNA: How did you start playing the drums? What attracted you to the instrument?

ALI: It was 1996 and I was 10 years old, in the fifth grade. In my elementary school that was the first year you were allowed to join the school band, which for me was something I had been anticipating since kindergarten. I have always LOVED music and couldn’t wait to make it myself. At this point in my life bands like No Doubt, Weezer, Green Day, Bush, 311, etc. had really struck a chord with me, so I knew I wanted to pick up a rock instrument. Since guitar wasn’t an option in school-related music, I had to choose between upright bass in the orchestra or percussion in the school band. I noticed there were no other girls in the percussion section at my school and decided I had to be the first one. I actually started somewhat of a movement because after I joined, three other girls joined percussion and it became 50/50 male-female.

When trying to decide between bass and drums I would actually stand in front of the mirror and practice what I would look like playing each instrument. I decided drumming looked cooler. I also asked my brother what he thought I should pick, to which he replied, “Drums. Everyone needs a drummer.” He was right, and my decision was made.

Once I turned 14 and went off to high school I thought I was “too cool” to be a “band geek,” which is something I really regret, and as it turned out I was a geek anyway, band or no band. My musical hiatus lasted a good two years until garage rock hit the mainstream while I discovered Riot Grrrl. Listening to Tobi Vail’s and Meg White’s drumming made me miss playing so much, and they drummed in a way I could understand. They weren’t showing off on 14-piece kits, this was straight up 4/4 punk drumming. I dusted off my kit and started reteaching myself all the beats I had learned as a kid, and started a band with my friend Ryan. I graduated from playing with friends in my parents’ basement in high school, to playing with friends in basements in college, to joining Vivian Girls, and now I play in Best Coast.

You joined both of those as the third member of the band. Has it been hard to create your own identity as a musician in already-established bands?

While I was the latecomer in both of the notable bands I’ve played/play in, and I’ve drummed in both, my roles in Vivian Girls and Best Coast are extremely different.

With Vivian Girls I was joining a band that wrote songs by collaborating. I came up with my own drum parts and helped arrange songs. Since I was very familiar with Cassie’s and Katy’s writing styles, having been a fan of Cassie’s previous bands, and having been in multiple bands with Katy before Vivian Girls, my transition into the band was pretty seamless.

In Best Coast, Bethany is Best Coast. She writes all the songs—lyrics, melody, structure, etc.—and Bobb [Bruno] enhances what Beth writes sonically and writes all other instrumentation. My role in Best Coast is simply to try and re-create live what Bobb made on the records. I like to think I give life to the music and hold it together live. I also just try to be a generally pleasant person to be around on tour. It’s hard enough being away from home, and if you’ve got someone in your band who makes everything difficult, that’s no fun for anyone. I get along very well with Beth and Bobb. They’re two of my best buds, and I’m very grateful they’ve welcomed me into their little family.

Have perceptions towards female drummers changed since you started playing?

I’m not exactly sure what the perception was before, because it was something I never really had to think about, but I will say I see more female drummers out on tour than I ever saw as a kid. There still is a novelty to female musicians, though. Almost every show I’ve played, a stagehand or sound technician will see me setting up and make a remark like, “Oh! A girl drummer!” which is harmless, but at the same time it’d be nice for the day to come where it is just as normal to see a woman behind a drum kit as it is a man. This doesn’t just go for music, though—any time a woman does something that’s not necessarily feminine, whether it’s going to a shooting range or driving a motorcycle, it provokes a reaction from people, positive or negative. And while it is silly that in 2011 there are still these stereotypes, there’s something empowering about being that woman causing the double-takes.

Do you remember your very first time playing in front of a live audience?

The first EVER time was at this bar in Seaside Heights, NJ, called Beachcomber (which is actually the bar where Snooki got punched in season one of Jersey Shore) and it was just me and my friend Ryan and we played a handful of songs to a handful of uninterested people. It was pretty anticlimactic.

My first show with Vivian Girls was incredibly nerve-racking. It was at Music Hall of Williamsburg with Tilly and the Wall. I had probably practiced about five times with them, never played a show with a sound check or a monitor, and had never sung and drummed at the same time before. I got onstage, didn’t make eye contact with anyone and pretended to sing into the microphone since I knew I’d mess up if tried to really sing. I can’t remember how it went. I’m sure it was riddled with mistakes, but we were all very lax about precision back then, so I’m sure once we got offstage we shared a beer and a laugh.

You’ve put a lot of songs you wrote in college on your Tumblr. Do you want to write songs for Best Coast, or to work on a solo music project?

I will never be writing in Best Coast—it’s not my project. But I’m sure I will eventually make a record with friends for fun, for myself, just to get it out of my system. I’d feel really accomplished if I were to write and record something I liked, even if no one heard it. I always keep a notebook of lyrics with me that I am constantly adding to, which will eventually turn into songs. I was actually in a couple of bands where I wrote, sang, and played guitar before joining Vivian Girls.

What’s hard about being on tour, and what’s awesome about it?

The worst part is not seeing your friends, family or boyfriend. For example, I am missing my only brother’s wedding for this European tour. I am also missing my best friend’s birthday. Stuff like that breaks my heart, but it’s the price you have to pay to make a living off of something you love. The awesome part about tour is meeting fans and seeing a crowd of people respond to what you’re creating right in front of them. Seeing the world isn’t so bad either.

Which musicians do you think are doing interesting things right now?

I love so many of my peers’ bands, but the bands that currently truly blow me away with their originality are Warpaint, Tune-Yards, Jeff the Brotherhood, Lil Wayne, and always Lemuria (though I’m sure I’m forgetting someone very important).

I think everyone should see Warpaint live. It is the most powerful thing to see four confident, talented women just completely destroying everyone in the room. They aren’t trying to be sexy (though they are)—there are no gimmicks, just pure talent.

Tune-Yards makes the noise of an ensemble all by herself. Merrill [Garbus] creates such intricate sounds just using her pedals, her guitar, minimal percussion, and her otherworldly voice.

Jeff the Brotherhood is only a two-piece and is so insanely good live and on record. They write from pop to punk to straight-up Southern rock, and have really great music videos. I love them like I loved bands when I was 15.

I don’t need to explain why Lil Wayne is a genius, I think most people would agree. The stuff he comes up with is insane. He is what got me into rap.

First song you knew all the words to:
Besides your standard kid songs, probably Ace of Base, “The Sign.” It was my first cassette.

First record you bought with your own money:
Saves the Day, “Through Being Cool”

First celebrity crush:
Ted from Hey Dude. I drew a picture of him in a purple Western shirt and asked my mom to mail it to him at Nickelodeon. I’m pretty sure she threw it away.

First comic you loved:
Calvin and Hobbes, hands down.

First tattoo:
Bikini Kill turntable from the cover of The Singles when I was 18.

Lemuria has been my favorite band for a while. They do indie rock right, and they are just about as D.I.Y. as it gets for a band of their status. Sheena and Alex complement each other so well musically, and Alex’s drumming literally makes me want to give up. He plays things I can’t even wrap my mind around, that my eyes can’t even follow. They’ve never written a song I didn’t love. Ever.

A lot of current indie music gets the label “hipster.” What do you think about that designation?

Hipster has got to be the stupidest word that gets used today. It doesn’t mean anything. Basically people are belittling others for being into music, movies, art, fashion, and even locations that aren’t mainstream. What’s so wrong with there being a counterculture? If everyone lived inside the box this world would be a really boring place. Do I think there are bands that are derivative and bland and get hyped for reasons that I don’t understand? Sure, but that’s just my opinion, and I don’t have to listen to those bands.

If you had a chance to rescore any movie, which would you pick?

Oh man, good question. I can’t think of any movies I’d rescore, but I’d love to score a Lena Dunham movie one day. If Diablo Cody did another coming-of-age movie I could probably score the shit out of it.

Are you good at Rock Band?

I’ve only played Rock Band once and I sucked at the drumming. Guitar Hero is more my speed. I can play the X song on Hard.

Is one of your calves a lot bigger than the other from hitting the bass drum?

No, but my right arm is bigger from using it to keep time. I call it my Popeye arm. I hate it. ♦